The Aviation Fair in Pardubice, which has been organized for almost 30 years and already is one of the best-known air shows in the Central Europe, now got its own wings. On 22nd October 2019, the Aviation Fair Squadron (Letka Aviatické pouti) officially commenced its operation, when the first aircraft of the newly established squadron – an ultra-light replica of Nieuport 11, the World War I biplane fighter – was officially christened in Pardubice.

´The Aviation Fair is now one of the highly significant events for Pardubice and Pardubice Region, famous all over the country and having its strong position in the European air show calendar. It comes as no surprise, because Aviation Fair is the show with the longest history in Czech Republic, and before that, in former Czechoslovakia; and our organization team is working hard year by year to prepare rich and various event, including many novelties in the programme.´ said Aviation Fair chairman of the board, Ladislav Minařík, and added: ´For the upcoming jubilee year we´re preparing a few premieres and among them there would be the flying display of Nieuport 11 biplane fighter, which would be shown by the newly established Aviation Fair Squadron´. 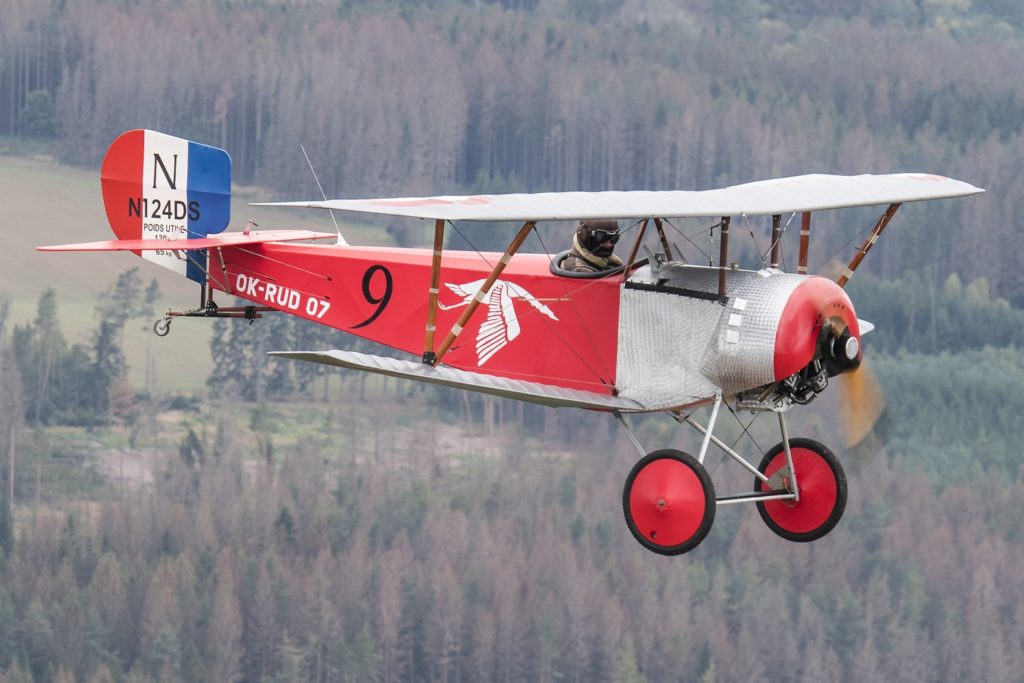 ´This idea, that the Aviation Fair would have its own squadron, is now exactly 25 years old. Initially, we have ordered the replica of Bleriot XI to be built, as this was the aeroplane in which Jan Kašpar flew from Pardubice to Prague. Unfortunately, the company at which we placed our order, did not complain with all requirements and in result this aeroplane has never flown. We found ourselves in the complicated situation and for many years we gave up the idea of having our own airworthy aeroplanes. We were glad we could at least show this Bleriot at the static display. I was particularly pleased when, a while back, Jan Rudzinskyj came with the idea to create the Squadron.´ recalls Jaroslav Janda, one of the Aviation Fair founders.

´The fact that Nieuport 11 is the very first aircraft in the squadron, is just a mere coincidence.´ explains Jan Rudzynskyj, member of the Aviation Fair board. ´Initially, we wanted to build a replica of Rapid aeroplane, the one used by the second aviation pioneer from Pardubice, Eugen Čihák. While we were working on the project, there suddenly was a chance to buy already built and airborne replica of Nieuport, and additionally it fitted into our budget. This was the solution allowing us to show the aircraft during the upcoming jubilee edition of the Aviation Fair, what would be impossible for Rapid, because of the time factor. However, we did not give up the idea of building the Rapid aeroplane and currently we are working on financing this project. Our goal is to create the collection of the aircraft that would be decently recalling that Pardubice were the birthplace of the Czech aviation, and that the aviation is connected to Pardubice for over a hundred ten years.´ added Rudzinskyj. 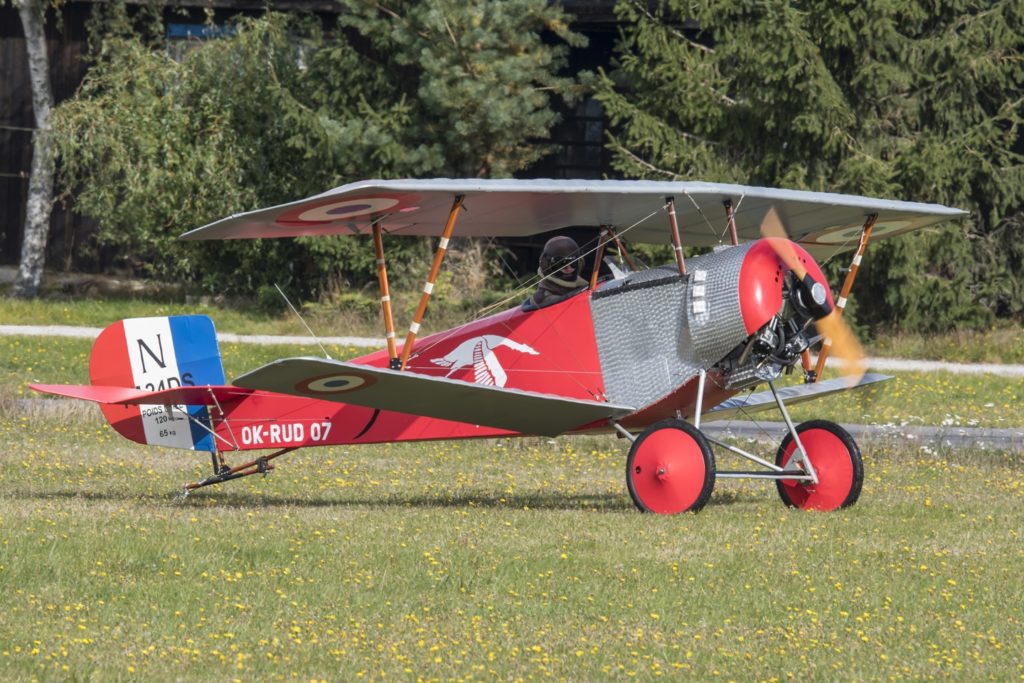 The first aeroplane of the Aviation Fair Squadron was officially christened by the chairman of the board, Ladislav Minařík. The ultra-light biplane replica is mildly reduced, than original Nieuport 11, to fulfil the weight requirements for the UL aircraft.

The Nieuport 11 UL will have its public premiere during the 30th edition of the Aviation Fair, to be held on 30th and 31st May 2020, at Pardubice airfield.

The logo of Aviation Fair Squadron

And if we´re talking about the Nieuport 11…

The master for the ultra-light replica is the famous French fighter Nieuport 11, nicknamed the Bébé, and originated from the World War I era. This aeroplane was introduced in 1916 as the solution against the ´Fokker Scourge´ – the time when Fokker Eindecker ruled the sky over the Western Front. The new Nieuport offered the improved rate of climb, better view from the cockpit and advanced manoeuvrability.

When first Nieuport 11s reached the operational units in January, they immediately outclassed the Fokker Eindecker, despite the disadvantage of their Lewis machine gun mounted over the propeller. Following the initial success, Nieuport 11s were then supplied also to the Royal Naval Air Service, the Imperial Russian Air Service, Belgium, Italy and Romania. The aeroplane was manufactured in France and, under licence, in Russia and Italy. Additionally, a few copies of the captured Bébé were built in the Netherlands.

The sole original Nieuport 11 that survived is now exhibited at the Musée de l’Air (Paris, le Bourget), painted as the aeroplane with serial N556 and carrying the personal markings of Commandant Charles Tricornot de Rose.

The ultra-light replica of Nieuport 11 was built in Brno, by Petr Svoboda. Nieuport 11 UL is reduced to 80% size of the original aircraft, due to the weight limits for the ultra-light aeroplanes and powered by Verner Scarlett 5 radial engine. 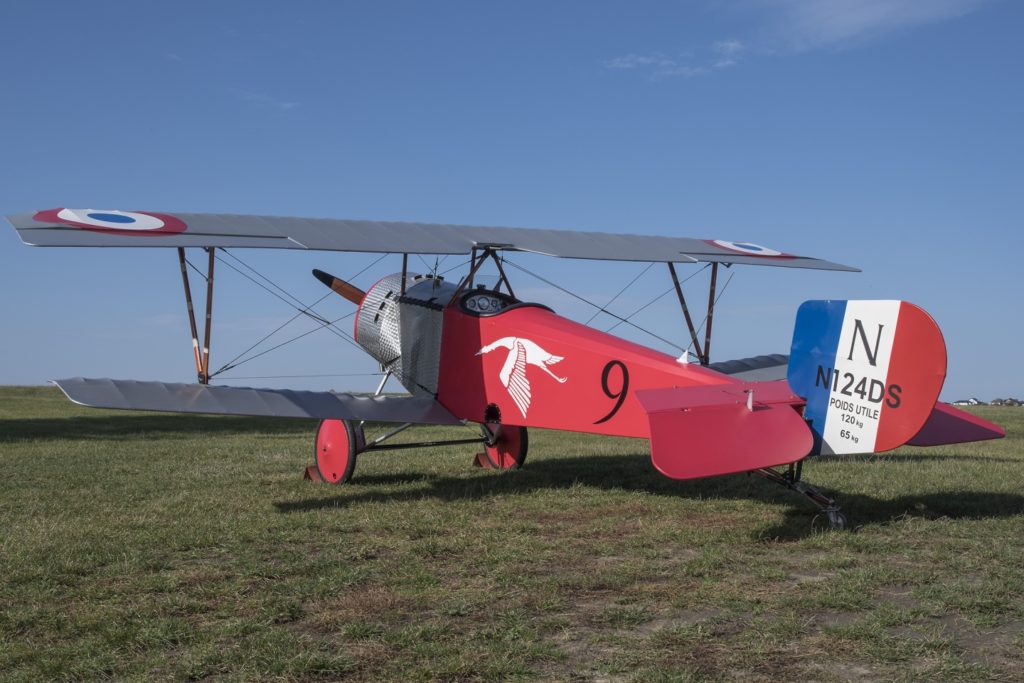