A few days ago, on 11th November 2020, the JAS-39C/D jet fighters operated by the Czech Air Force reached another milestone of their service, by accumulating 30,000 flying hours. This remarkable achievement has also a deep symbolic meaning, as it was accomplished exactly on the Remembrance Day.

The Czech Air Force received its first Gripen fighters more than fifteen years ago – on 18th April 2015, the first batch of six aircraft arrived Čáslav air force base, therefore opening the Gripen era in the Czech Republic. This was a direct result of long negotiations between Czech and Swedish government, that were finalized by an agreement concluded in 2004. The Czech Air Force had to receive fourteen new fighters (12 single-seat C version and 2 two-seat D version) through the long-term financial lease.

Arrival of Gripen marked a new dawn for the Czech Air Force. Until then, six years after joining the NATO, the Czech Republic was still operating the MiG-21MF fighter jets, manufactured in 1970s. Although the former Czechoslovak Air Force was also equipped with some more modern MiG-29s, the newly established country had no capabilities to maintain and service them after separation of Czechoslovakia. As a result, all MiG-29s that were assigned to the Czech Republic were sold to Poland, in exchange for W-3A Sokół helicopters. 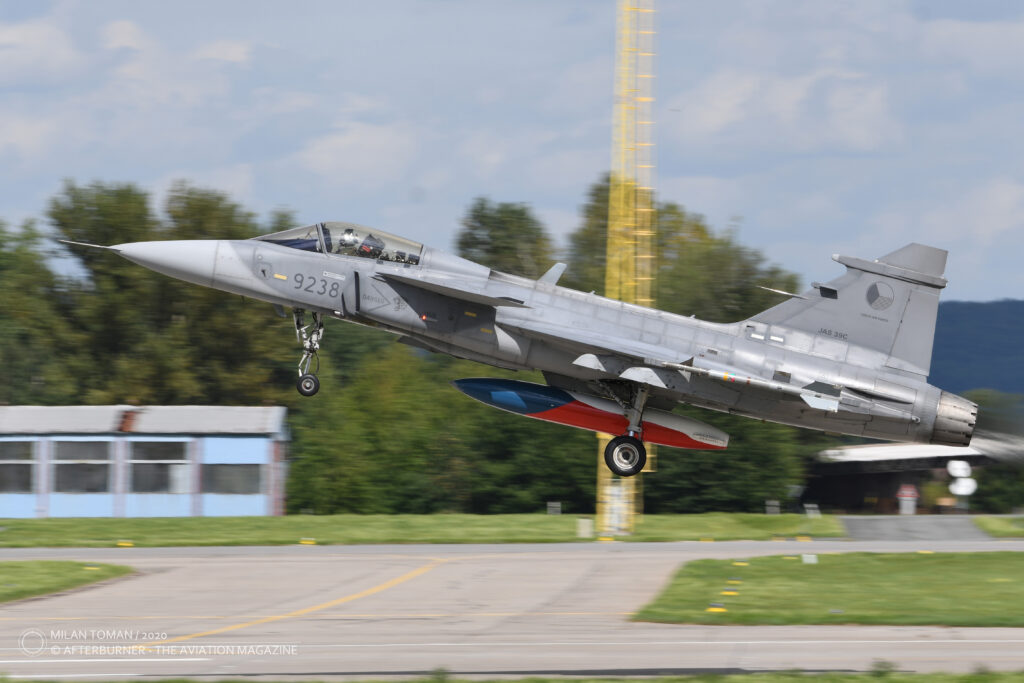 Interestingly, that the five years gap between achieving the full NATO membership by the Czech Republic and Slovakia resulted, inter alia, in completely different approach to their air forces. While, since the early 2000s, it became clear for the Czech authorities, that membership in the alliance requires an aircraft much modern than MiG-21 and able to cooperate withing the NATO structures and perform the air policy duties, the Slovak Air Force stuck with their MiG-29s. Lack of financial resources not only excluded any new purchase, but also limited the operational capabilities of the existing fleet. Only in 2004, when also Slovakia joined the alliance, the remaining MiG-29 fighters were partially modernized to keep with the NATO standards. Finally, the decision about buying 14 new F-16 fighters, was made by the Slovak government as late as 2018 – at that time, the Czech Gripen aircraft had already clocked approximately 25,000 flying hours.

With acquiring the new jet fighters, the Czech authorities decided for a long-term lease, instead of usual purchase. The agreement was concluded for 10 years and included 20 billion CZK (850 million USD) for lease of the aircraft, support and service, with the additional 150 million CZK for the crew training in Sweden. After expiry of the term, the Czech Republic could either buy out the Gripen fighters or return them to Sweden.

Although being significantly modern than the MiG-21s, the Gripen jets were initially delivered with just basic combat capabilities. They were equipped with onboard cannons and AIM-9L Sidewinder short-range missiles and essential software package MS18.5 (also known as MS18 Block 5). Their use was restricted by approximately 150 flying hours per aircraft for one year (21,000 flying hours in total).

This basic characteristics were however enough to fulfil the elementary task assigned to the Gripen fleet – join the NATINADS (later as NATINAMDS – NATO Integrated Air and Missile Defence System) structures in July 2005 and replace the role of MiG-21s within the air defence system. 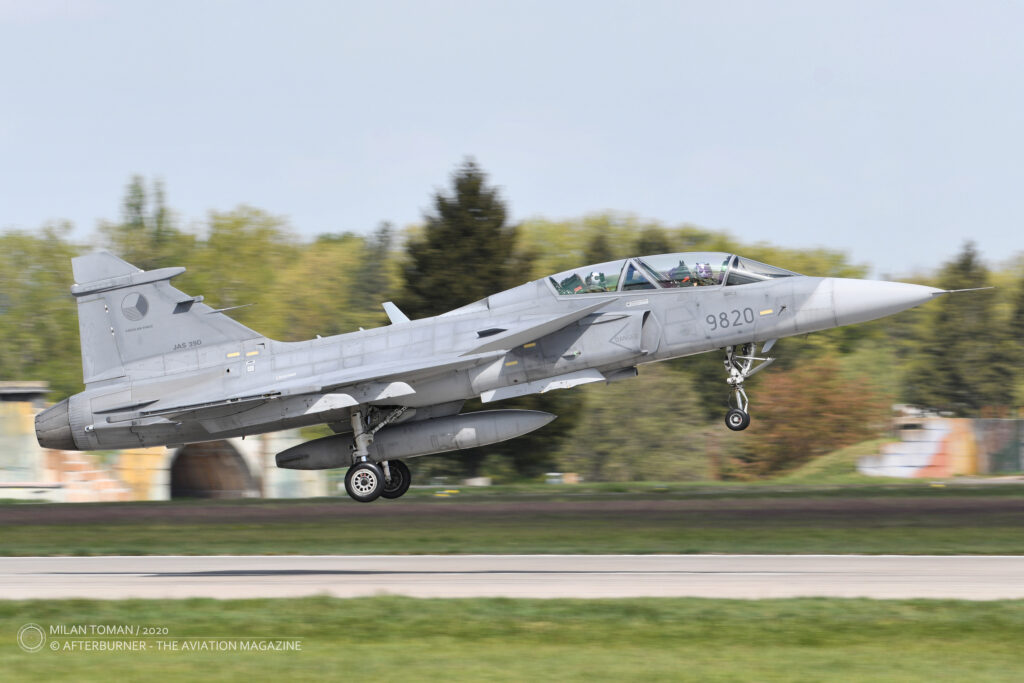 Over the next years, the capabilities of Czech fighters were subsequently increased and the Gripen jets underwent a few upgrades and modifications. Firstly, their software was exchanged for MS18.7 version, together with additional upgraded systems, and the aircraft were re-armed to AIM-120 AMRAAM missiles. Another significant upgrade came with the MS20 standard that allowed Gripen aircraft to engage ground targets using unguided and laser-guided bombs, their air-to-air capability was improved through new radar modes, Link 16 data link was added and, finally, the Israeli-made Rafael Litening III electro-optical targeting pod was implemented, together with the night-vision goggles.

The abovementioned modifications significantly improved the capability of Czech Gripen fleet. Apart from the domestic air defence duties, the fighters were actively participating in many foreign missions and exercises, some of the latter were also organized in the Czech Republic. One of the most known tasks performed by the Czech Air Force with JAS-39s are the NATO air policing duties. Starting with the first mission, Baltic Air Policing already performed in 2009, the Gripen fighters protected the Baltic states also in 2012 and 2019, and the sky over Iceland in 2014, 2015 and 2016.

According to the information released by the Czech Ministry of Defence, the Gripen upgrade programme is still being continued, despite some delays caused by the coronavirus-related situation. Within two years, the upgrade of aircraft software to MS20 Block 2 should be finalized. ANVIS F4949X-P night goggles were already implemented, together with the latest Flyghjälm type 116H2 helmets. Another step forward will be related with the communication and navigation systems, by adding the Secure Voice onboard equipment from Leonardo, new IFF Mode 5 identification system, upgraded GPS and Ground Collision Avoidance System. There are also other plans focused on successive improvement of the ground-support capabilities of the Czech JAS-39s, by purchasing modern air-to-surface armament systems. 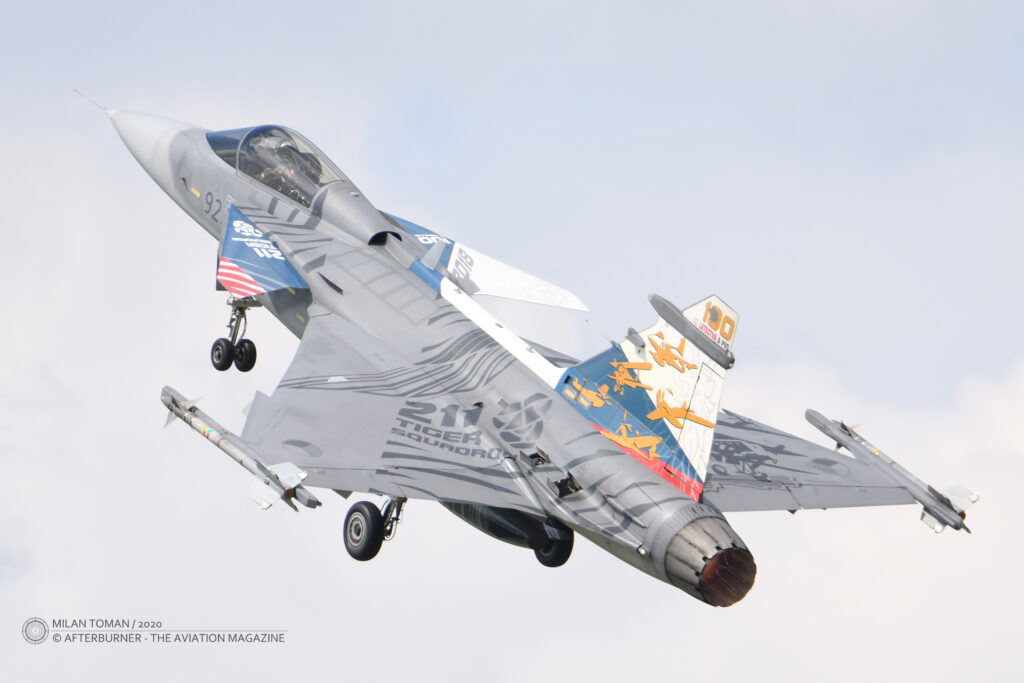 JAS-39C, ´The 100th anniversary of the air force and the air-defence´ special livery

On the other hand, the Czech Air Force is slowly approaching the lease expiry term and the question what comes next was already opened by the military and government authorities – although currently totally overshadowed by the Covid-19 pandemic. Certainly, due to the long-time experience, already done investments and the resources spent on training (35 pilots and 110 members of ground crews that already underwent training in Sweden), continuing to move together with Saab company seems to be the best option. Both the already used aircraft could be bought out and operated beyond 2027 or the new Gripen E (initially known as Gripen NG for ´new generation´) implemented. Such decision will allow to use the existing training and maintenance facilities and experience of the flying and ground personnel.

However, decisions related to the military equipment often have also the political background and there are several other options that, without being rational, must be also taken into consideration. Although leaving the country without any supersonic jet fighters seems almost impossible, there are some opinions supporting such solution, considering the jet aircraft to be just an ´expensive and useless toy´. Purchasing any of the European fighter aeroplane, EF 2000 or Rafale, is also an unlikely possibility.

Nevertheless, one of the American aviation manufacturers could be a serious competitor in the race for the future of the Czech Air Force fighter fleet. Several opinions opting for F-16, usually grounded by so-called ´fleet unification´ with Poland and Slovakia, were already spread in the media, together with those calling for the 5th generation fighter – F-35 Lightning II. Admittedly, the purchase and operating cost of the latter could be beyond the budget limit of such small air force, but as already mentioned, some decisions are being made by politics, not accountants.

Saab JAS-39C/D Gripen is Swedish-manufactured light, single-engine fighter aircraft. The aeroplane performed its maiden flight already in 1988 but was introduced into operation in June 1996. Apart from the Swedish Air Force, Gripen jets are being operated by Hungarian, Brazilian, Czech, Royal Thai and South African air forces. In the recent years JAS-39s were also offered for several other European countries but failed to F-16 (used – Romania, new – Slovakia), F-35 (Denmark, the Netherlands and Belgium) and withdrawn from the Swiss bid. Currently, Gripen E is among the participants of the Finnish future jet contest. 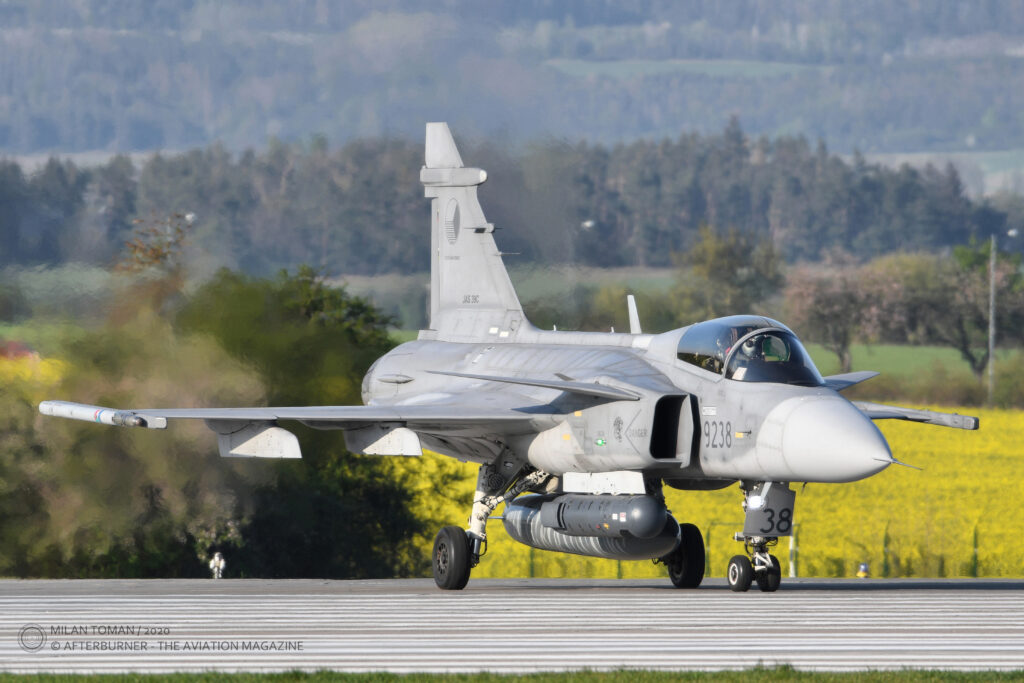