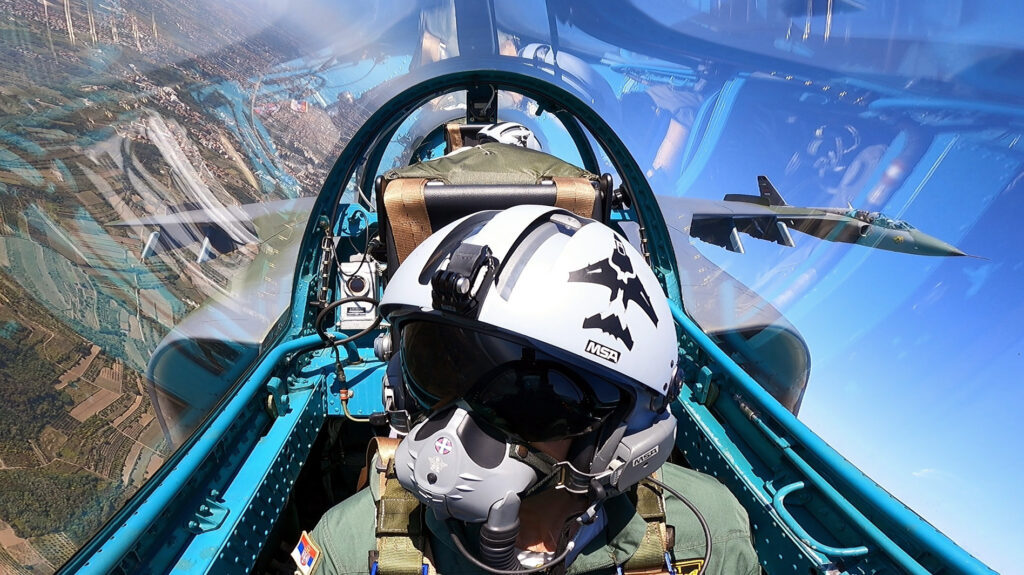 At the beginning of this year, we paid a virtual visit at the 98th Air Brigade of the Serbian Air Force and Air Defence (98. Bаздухопловна бригада, Ратно ваздухопловство и противваздухопловна одбрана Војске Србије) to look at live-fly training, that was carried out in winter conditions.

This time, nine months later, and thanks to some materials recently released by the Serbian MoD, we are able to go back to Lađevci again. This time we took a closer look at group and formation training flights that are organized by the 98th Air Brigade on regular basis.

Those flights are among the most crucial elements of military pilot training. Majority of combat missions are executed by groups of several aircraft, flying in particular formations and order, to secure an appropriate power of impact and accomplish the given task.

The live-fly training missions are held in all weather conditions, during day and night. Group leaders and other pilots are able to practise techniques of formation flights, flight-preparation procedures and air combat tactics, in order to be prepared to perform assigned tasks in any situation.

Parallelly to pilot training, the ground crews practise their drill in aircraft maintenance and service to respond properly to any challenges that may occur during real combat missions carried out at difficult weather conditions.

The 98th Air Brigade is based at Krajlevo-Lađevci airfield, commonly called ´Morava base´. Majority of the training flights are held in a wider area around the city of Kraljevo, Raška District. It comprises of the 241st Fighter-Bomber Squadron (the ´Tigers´), the 714th Anti-Armour Helicopter Squadron (the ´Shadows´), the 119th Mixed Helicopter Squadron and air defence, security and technical units.

The abovementioned 241st Squadron currently operates a Soko J-22 Orao (English: eagle) – a twin-engine, fighter-bomber and reconnaissance aircraft, designed in the 1970s as a joint Yugoslav-Romanian project (in Romania known as IAR-93 Vultur). While Romania has already retired all their IAR-93 aircraft in the late 1990s, Serbia still has approximately twenty J-22 jets in active service and a few more in storage.

Since 1990s, several different modernization programmes for Orao aircraft were proposed, including the most advanced one, so-called ´Orao 2.0´. In recent years, an upgrade of existing J-22 fleet was already among main objectives of the Serbian Air Force.

The final, international phase of this year´s International Air Crew Training Competition ´Aviadarts-2021´ was officially opened yesterday, on 22nd August 2021. As usual, the live-fly part of the contest is held at Dubrovichi training ground, […]

The Eagle has landed… at Eglin AFB

On 11th March 2021, the first F-15EX – being the newest fighter aircraft of the United States Air Force – has arrived to Eglin Air Force Base, Florida. This aeroplane will be the first USAF […]