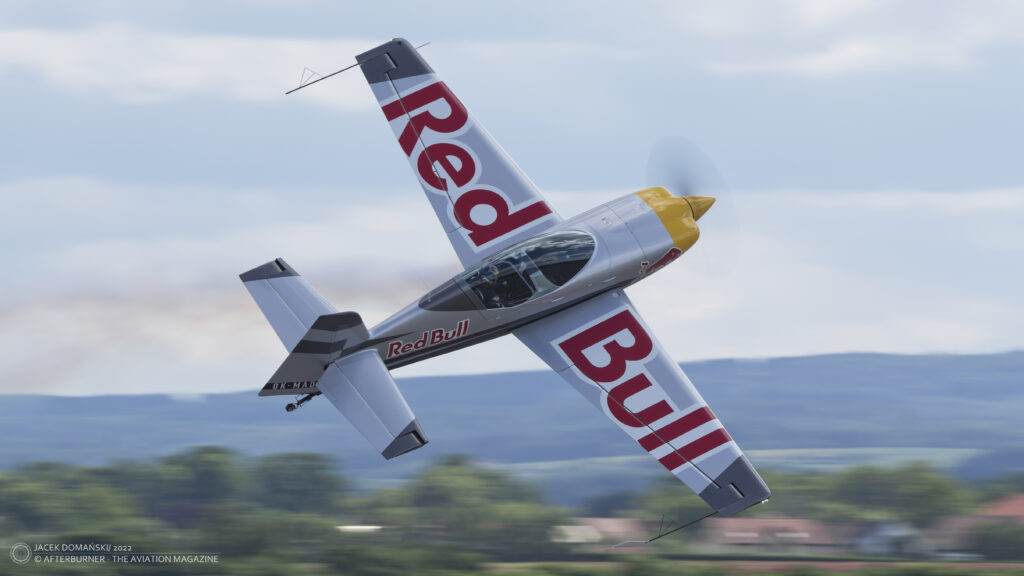 A series of aerobatic aeroplanes made under the common brand ´Extra´ is widely acknowledged in the world, not only for aviation enthusiasts. The aircraft are manufactured in Germany by EXTRA Flugzeugproduktions – und Vertriebs – GmbH (commonly known as Extra Aircraft). The company was founded in 1980 by Walter Extra, aerobatic pilot and engineer driven by the idea of creating his own aerobatic aircraft.

In 1983, first aeroplane designed by Walter Extra, the Extra 230, was officially introduced. It was a single-seat, mid-wing monoplane of mixed construction (fuselage made of steel tubes and wooden wings) and fixed tailwheel undercarriage.

Its successor, designated Extra 300 and flown for the first time in 1988, turned out to be a great success that made the company famous. The Extra 300 was a two-seat aircraft in tandem configuration created with use of carbon fibre composites. It became the first aeroplane from the so-called 300 series, that currently includes more than ten upgrades and modifications of the initial design – single-seat versions, different engines or reduced-weight variant for aerobatic competitions.

There is no exaggeration in saying that the Extra 300 had revolutionized the world of aviation aerobatics. Shortly after its introduction, the aircraft became one of the most popular aerobatics specials that dominated the aerobatics competitions and air show displays all over the world. Several national and international championships were won by pilots flying an aircraft from the 300 series, the aeroplane became the choice of many civil and military aerobatic teams, as well as individual stunt and aerobatic pilots. One of later variants of the aeroplane, the Extra 330SR, was also one of the aircraft used within the world-famous Red Bull Air Race championships.

On 22nd July 2019, at the EAA Air Venture Oshkosh, the Extra Aircraft company had for the first time revealed its newest aircraft – the Extra NG (an acronym for new generation) – to the public. In October of the same year, the aeroplane received its EASA certification.

Similarly to the 300 series, the new aeroplane designed by Extra seems to be another milestone in aviation aerobatics. It features an all-carbon rigid airframe, used for the first time in that type of aircraft, carbon fibre wings and fuselage, improved aerodynamics and manoeuvrability, as well as completely redesigned cockpit and avionics.

The Extra NG, similarly to its predecessor, is a low-wing cantilever monoplane with two seats in tandem configuration. The seats are also made of carbon and covered by a joint bubble canopy of a really nice designed, aerodynamic line. The aeroplane is powered by Lycoming AEIO-580-B1A, six-cylinder engine that generates 315 hp. The Extra NG is certified for +/- 10 g load factor.

There were more than thirty aeroplanes of that type made so far. One of them, the Extra NG with serial NG015 and registered as OK-MAD, is flown by Martin Šonka – famous Czech aerobatic pilot, domestic and European aerobatic champion in classic and unlimited categories, as well as world champion of the 2018 edition of the Red Bull Air Race.

During the 2022 air show season, Martin Šonka is going to fly several aerobatic displays at domestic air shows, without any doubts using all capabilities of his new aircraft. For the first time, Šonka presented his Extra NG to the public at Den ve vzduchu s Plzeňským krajem in Plasy. A few weeks later, his aerobatic display was one of the highlights of the 30th edition of Aviation Fair in Pardubice.

Seventeen years ago, on 18th April 2005, the first six JAS-39 Gripen aircraft arrived to Čáslav air force base in the Czech Republic, therefore opening the new era in the Czech Air Force. Implementation of […]

A formation of four Zlín Z-50LX aerobatic aircraft from the Flying Bulls Aerobatic Team, flying display during an open doors event at Aeroklub Jaroměř, May 2013. Back in 1973, a development of a new single […]