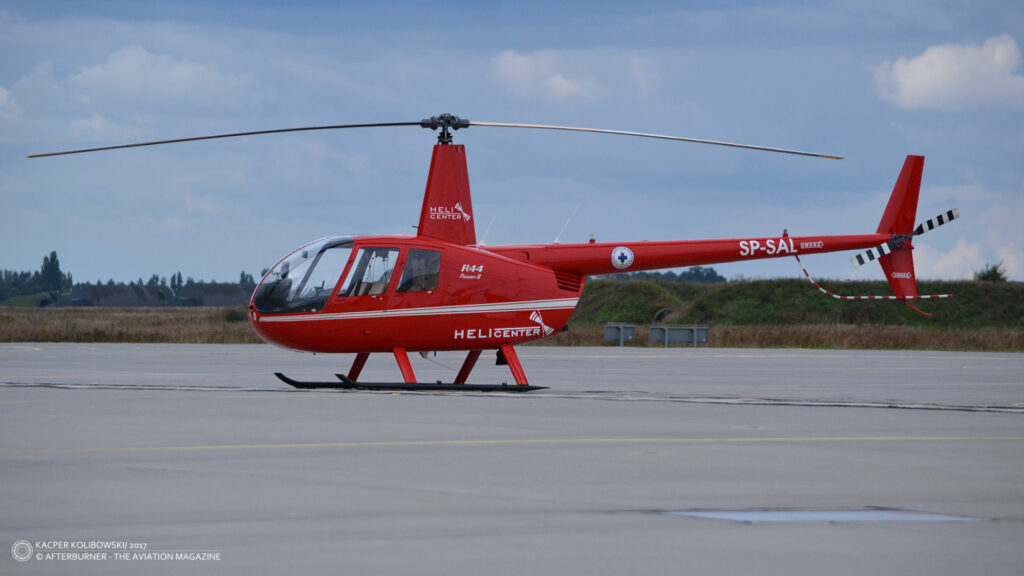 In 1979, California-based Robinson Helicopter Company began production of its first helicopter, designated R22, which hit the market later that year. The R22 was a small, two-seat utility rotorcraft powered by single engine and equipped with two-bladed main and tail rotors. The general idea of its design was to keep the helicopter simple to operate and, above all, relatively inexpensive in purchase and maintenance. That resulted in its extraordinary popularity and soon the R22 made rotorcraft flying accessible to average, slightly more wealthy people.

In the 1980s, the founder and chief designer of the company, Franklin Davis Robinson (former employee of Bell Helicopter and Hughes Helicopters), together with his team of engineers began work on the next helicopter, which was a direct development of its successful predecessor.

Howewer, unlike its precursor, the new rotorcraft was already a four-seater, allowing up to three passengers to be taken on board. In addition, the direction of rotation of its tail rotor was reversed compared to the R22 for improved yaw control authority, with its leading blade at the bottom.

R44 Astro, as the helicopter was officially named, made its first flight on 31st March 1990 and, almost two years later, received an FAA Type Certificate in December of 1992. In January of the next year, the first deliveries of the helicopter began.

The rotorcraft made aviation history in 1997, when Jennifer Murray became the first woman to complete a round-the-world flight with a helicopter. Flying the R44, she covered a distance of 57,936 kilometres (36,000 miles) in 97 days.

In 1998, the R44 Newscopter was introduced, being equipped with on-board electronic news gathering equipment.  Two years later, another variant of the helicopter appeared, designated R44 Raven. One of its main upgrades were hydraulically assisted flight controls and adjustable pedals.

In July of 2002, the next version was introduced, this time equipped with a more powerful fuel-injected engine and wider rotor blades. That increased not only the gross weight of the rotorcraft but also its performance at higher altitudes. Such modernized helicopter became known as R44 Raven II.

It is worth mentioning that since 2007, also a helicopter designated Robinson R66 is being produced. It is  an even larger version of the R44,  having a five-seat cockpit and  a cargo compartment. That rotorcraft is powered by a Rolls-Royce RR300 turbine engine and its construction combines modern advanced composites, aluminium and chromoly steel. However, it had not gained as much popularity as the R44.

In 2015, R44 Cadet was officially announced, being basically a two-seater version of the Raven I helicopter with cargo compartment instead of rear seats. The helicopter was fitted with a slightly less powerful variant of well-known Lycoming O-540 aircraft engine (used in the R44s from the Raven I version onwards).

As a result of the lessons learned from accidents involving R44 helicopters, one significant improvement was made to their design. It turned out that their aluminium fuel tanks were prone to damage and leakage during accidents what, in some cases, led to post-accident fires. Therefore, since 2009, bladder-type fuel tanks began to be installed to all new helicopters of this type, significantly reducing the risk of fire in the event of a possible crash.

Thanks to their simple design, ease of operation, relatively low purchase and maintenance costs, as well as their versatility, the helicopters from the R44 family have gained extremely high interest among users around the world. They are operated by many private users, companies, flying schools and aero clubs, for a number of purposes. The R44s are a common helicopters of choice for many sport pilots who use them for competition purposes. In addition, the R44 rotorcraft serve with law enforcement units, as well as government and military operators in many countries of the world.

Its extraordinary popularity can also be proved by the fact that since 1999, the Robinson R44 became the best selling general aviation helicopter in the world. And with more than 6,000 examples manufactured to date, it is one of the most produced general aviation aircraft of the 21st century.

Thus, there is no surprise those helicopters are also pretty frequent guests at several aviation events. One of such examples was the air show held at the 31st Tactical Air Base in Poznań-Krzesiny in September of 2017 and organized on the occasion of the Polish Air Force Day. It was then that we photographed that Robinson R44 Raven II, featured today within our Photo of the Week series.

During the last weekend of May, thousands of aviation enthusiasts headed for Pardubice in the Czech Republic, where this year´s edition of Aviation Fair (Aviatická pouť) was held. After a two-year hiatus caused by coronavirus […]

In today´s news about 2022 air show season updates we would like to focus on a few upcoming events from the Czech Republic. Although most of them were already mentioned in our leading article, now […]