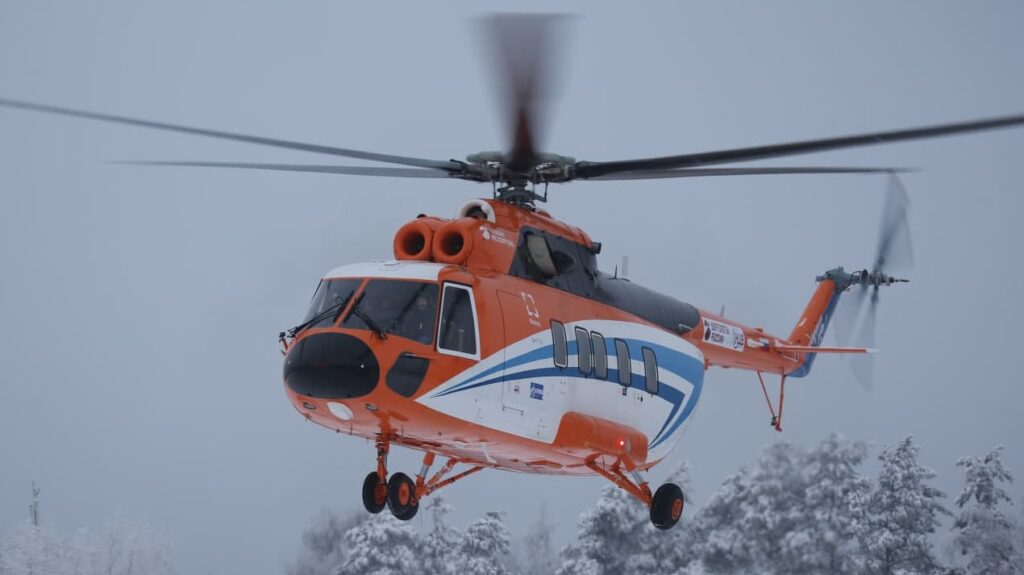 At the end of last year, two new Russian helicopters entered into next stage of development – flying tests of their prototypes. Although both Mi-171A3 and Ka-226T are based on already existing and proven designs, they are specialized rotorcraft intended to perform a new range of tasks, significantly increasing capabilities of their predecessors. In addition, both helicopters were designed in accordance to nowadays aviation standards and digital flight environment.

In November of 2021, the upgraded Ka-226T light helicopter successfully completed its maiden flight, although performed only in a hover mode.

On 30th December, pilot Alexander Cherednichenko and navigator Maxim Bespalny took-off in the Ka-226T for the first circle flight. It lasted about twelve minutes and the helicopter flown a circle with an average speed of 100 kph, at altitude of up to 300 metres.

For the first time, the new Ka-226T helicopter was presented to general public at static exhibition of the International Aviation and Space Salon MAKS-2021. An international premiere followed at the Dubai Airshow 2021, then the rotorcraft participated in the Airshow China 2021.

The Ka-226Т is the newly developed variant of light, modular helicopter with coaxial-rotor. The rotorcraft was designed especially for high-altitude operations, receiving a trade name of Альпинист (the Climber). Key features of the modernized version include an adaptation for high altitude flights. The rotorcraft can operate at altitudes of up to 6,500 meters, and may be equipped with oxygen installation, air conditioning and heating system.

That light helicopter is characterized by low vibration, ease and simplicity of operation, an ability to take-off and land on helipads of minimum size – including urban areas, ships and vessels. It has a high accuracy of hovering, even with cargo load on its external sling.

´Flight tests of the upgraded Ka-226T continue successfully. The first circle flight is among the most important milestones in development of that upgraded rotorcraft´, said Nikolai Kolesov, General Director of the Russian Helicopters holding, adding that soon Russian and foreign customers will be able to appreciate its maximum adaptation to fly in high mountains.

The Ka-226T has a new airframe, designed to significantly improve its aerodynamics. In addition, fuselage of that helicopter has been manufactured with use of modern lightweight materials. The ´Climber´ has also received an upgraded control and electrical systems, an impact-resistant emergency fuel system, enlarged fuel tanks, as well as new navigation and radio communication equipment.

On 17th December 2021, the long-awaited Mi-171A3 offshore helicopter, flown by crew of Alexander Klimov and Vladimir Kutanin, performed its maiden flight. The first flying test of that new Russian multipurpose helicopter was done in a hover mode, followed by a few short vertical manoeuvres, and lasted approximately fifteen minutes. It not only proved a stable operation of all systems but also officially launched a series of company flying tests.

´The first flight is an important stage in the testing of the new rotorcraft. According to the pilots, the helicopter is great, easy to manage, and the equipment works well. We expect that the rotorcraft will be in high demand among companies in the fuel and energy sector, both domestically and abroad. The market volume for the new offshore helicopter is estimated at about 100 rotorcraft by 2035 but this forecast is likely to be improved – the interest in the Mi-171A3 from potential customers significantly increased after its premiere at MAKS-2021´, noted Sergey Chemezov, CEO of Rostec State Corporation.

The development of the Mi-171A3 began in 2018. The rotorcraft was designed for being primarily used in offshore operations, including maintenance and transport duties at drilling platforms. The Mi-171A3 fully complies with International Association of Oil and Gas Producers standards, as well as meets increased requirements for safe over-water flights.

In 2020, the Russian Ministry of Industry and Trade signed a development contract with the Russian Helicopters holding and then supported the project of new offshore rotorcraft with an amount of one billion roubles.

The Mi-171A3 has exceptional transport capabilities as for the medium multipurpose helicopter class. Maximum take-off weight of the rotorcraft is 13,000 kg, it can carry up to 24 passengers and has a maximum range of 1,000 km. The helicopter is designed to operate in any conditions, including marine missions, tropical and cold climate environment, with a temperature range between -50 and +50 centigrade.

The helicopter is equipped with a digital suite, providing an automatic and manual control of the rotorcraft at all stages of flight, from take-off to landing. The Mi-171A3 features a possibility of automatic piloting both in airways and in unregulated airspace, regardless of a level of ground radio navigation support.

75 years ago, on 8th May CET (or 9th May MSK) 1945, the long-awaited surrender of Nazi Germany became a fact, ending the dark years of the World War II in Europe. Although, not all […]