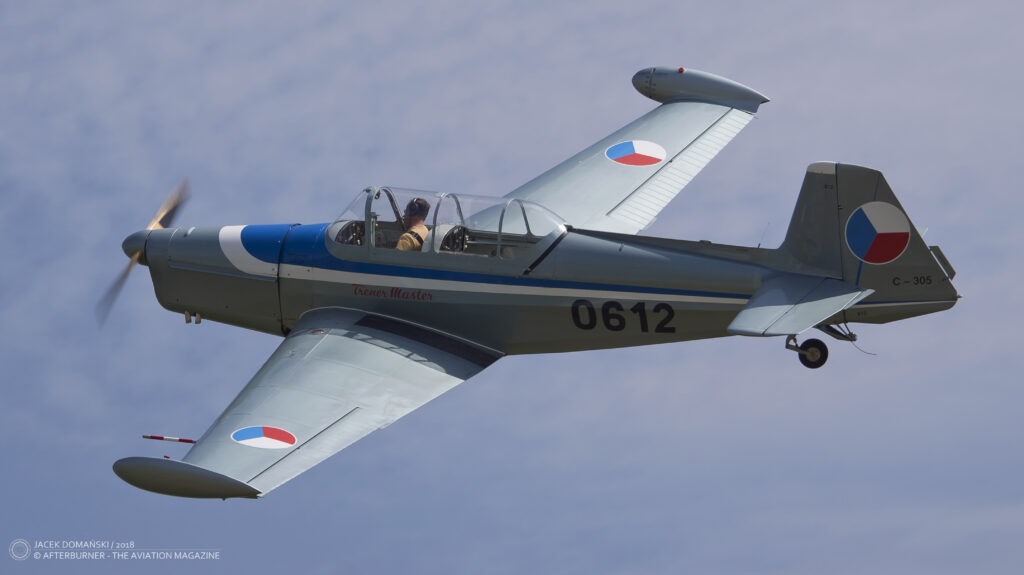 More than 74 years ago, on 20th October 1947, new Czechoslovak monoplane took-off for the first time. Commonly known as Zlín Trenér (English: trainer), the aircraft gave start for an entire series of Czechoslovak aerobatic and training aeroplanes that were successfully manufactured until the 1970s. For many years, the Trenér family was a backbone of pilot training programmes and an icon of aeroclub aviation, not only in the former Czechoslovakia but also in many other countries.

History of that legendary Czechoslovak aircraft has started shortly after the World War II, when the Ministry of Defence was looking for a new training aircraft to succeed post-German designs. Among the requirements, a two-seat cockpit in tandem configuration and full aerobatic capability were underlined.

In response to abovementioned demand, two aircraft were proposed: Praga E-122 – being a variant of an aircraft designed already in 1934, but never finalized, and Zlín Z-26 – designed by Karel Tomáš from an aviation factory in Otrokovice. The latter performed its maiden flight on 20th October 1947 and was a mixed-construction monoplane with wooden wings and tail, powered by Walter Minor 4-III inline piston engine.

The aircraft created by Tomáš was finally announced the winner of the contest and then approved for serial production. The first aeroplanes – that received an official civil and military designations Zlín Z-26 Trenér and C-5, respectively – were delivered for the Czechoslovak MoD in 1949. There were more than 160 examples of that aircraft built and, apart from being used in Czechoslovakia, they were exported to Poland and Romania.

In 1953, the aircraft factory in Otrokovice, earlier known as Zlínavion and later being a part of a state holding led by LET Kunovice, was renamed into Moravan n.p. (a state-owned company). The aviation plant functioned under that name until 2009, when all assets of Moravan were taken over by Zlin Aircraft joint-stock company. Nevertheless, aircraft made in Otrokovice were manufactured under the ´Zlín´ brand in all that time.

In the same year of 1953, the first modification of Z-26 appeared, designated as Z-126 Trenér 2 / C-105. The most significant feature of that new aircraft were all-metal wings and tail that replaced the wooden ones. It went into serial production one year later and almost 170 examples of that variant were made. And exactly from the Z-126 version, that neat training and aerobatics aircraft started gaining more popularity. The Zlín Z-126 was not only used in Czechoslovakia but also exported to eleven other countries and even acquired by the Austrian armed forces.

Here, with introduction of the first official upgrade of the initial design, it is important to mention about the number of variants, subvariants and modifications of the original Trenér aeroplane. Jokingly speaking – there is no one who knows the exact number of all types derived from the Z-26. Although there were several attempts made to arrange all possible variants in order, their authors usually admit that they are not sure if the list is really complete. Either way, the final number of all modifications and upgrades of the Zlín Trenér shall be greater than thirty.

In 1954, following the need for a specialized tug aircraft, there was another variant introduced. It was powered by Walter Minor 6-III engine and control panel was removed from the first seat to reduce weight of the aircraft. Such modified aeroplane was designated Z-226B Bohatýr (English: hero) and was a base for an aerobatic special known as Z-226A and another training version, Z-226T Tréner 6 / C-205, that came in 1956.

There were approximately 360 of the Z-226 aircraft built, in all modifications. And similarly as the previous model, they were exported to at least ten countries all over the world, including the Soviet Union, Egypt, East Germany or Vietnam.

In the 1960s, another interesting variant was created in Poland, based on the Z-26 aeroplane. At that time, Polish aerobatic team was facing a the lack of suitable one-seat aircraft. Following an idea of Stanisław Kasperek, a conversion of the Z-26 to aerobatic special was made. In 1963, during an aerobatic championship in Moscow, Kasperek won the third place. In order to emphasize the difference between the Polish-made variant and original Czechoslovak Z-226A, the Polish team named that aircraft as Super Kaspar Acrobat. Finally, there were sixteen more Z-26 upgraded into that single-seat version.

Shortly after an introduction of the Z-226, another upgrade was proposed. Zlín Z-326 Trenér Master / C-305, as the aircraft was officially designated, received a completely redesigned wings, retractable gear and a new cockpit canopy. Similarly to the Z-226, it was powered by Walter Minor 6-III inline engine.

Serial production of the Trenér Master was launched in 1959 and there were more than 430 examples built, in all variants and modifications. The Z-326, mostly used for training purposes only, was manufactured for domestic market and also exported to the Soviet Union and East Germany.

In 1965, another modification of the Zlín Trenér appeared. Designated as Z-526 Trenér Master, the new aircraft performed its maiden flight on 3rd September 1965. Its serial production was launched in 1966 and lasted until 1969, when the Z-526 was replaced by an upgrade known as Z-526F, powered by Avia M-137A engine.

A total number of sixty one aircraft of the initial Z-526 variant was manufactured, together with approximately another 270 aeroplanes representing all modifications of the basic version. They were delivered to many countries, including the USA, Poland, South Africa, France or Spain.

The final modification of the Trenér series was proposed in 1973. It was designated as Z-726 Universal and approximately thirty aircraft of that variant were made. Production of the training and aerobatic aeroplanes based on the Z-26 design was finally ceased in 1974, with almost 1,500 examples in all versions built until that time.

Obviously, our short review mentions only the main, most common variants of that aeroplane – as detailed description of every single modification could easily result in writing a full book. A few customised variants existed (as for example Z-526FI, single-seat aircraft for Iraq), there were many post-production conversions between models – some of them caused by shortages in engine deliveries. As an example, one aircraft could be manufactured as Z-226T, with Minor 6-III engine, then converted to Z-126T with Minor 4-III, then re-converted again to Z-226M but powered with M-137 engine and finally being converted into Z-226L with Lycoming powerplant. If this does not sound complicated enough, particular aircraft could differ due to size and location of fuel tanks, oil tank, propeller and modifications made in the cockpit.

Starting from the 1950s, hundreds (if not thousands) young pilots, both military and civil, began their career with one of the aircraft from the Trenér family. That Czechoslovak aeroplane quickly became popular all over the world and individual examples were even exported to the USA, Australia or New Zealand. Aerobatics variants of the aircraft were extremely popular among European pilots and allowed them to won many prizes in domestic and international competitions.

At the beginning, there was Lockheed Trophy competition, held in Coventry, UK. In 1956, Jiří Bláha and his Z-226T were ranked second. One year later, Vilém Krysta took gold for Czechoslovakia, flying Z-226A and two other Zlíns were ranked in fourth and fifth place.

The Lockheed Trophy was commonly considered as unofficial world aerobatic championship, so it was no surprise that aircraft from Otrokovice were noted and appreciated – not mentioning about their export success. In 1958, the Trophy was won by French pilot Léon Biancotto, flying the aeroplane from the Trenér family.

Although this series of success at the Lockheed Trophy was continued until 1964, it was just one of the many aerobatics competitions dominated by that Czechoslovak aeroplane. During the first official FAI World Aerobatic Championships, held in 1960 in Bratislava, Ladislav Bezák flying Z-226A took a gold medal but also the second and third place were taken by pilots flying that type of aircraft. In 1962, the championship was won by Hungarian acrobat Josef Tóth, and one year later, the gold medal was awarded to Tomás Castaño from Spain – both of them were flying the Z-326 aircraft.

The years of domination of the Zlín Trenér family ended in 1968, with the last gold medal in the FAI World Aerobatic Championships won by Erwin Bläske from the German Democratic Republic. Nevertheless, in the 1970s aircraft from the Trenér series were still actively participating in international aerobatic competitions, usually allowing their pilots to be ranked in top ten.

Starting from the 1980s, the Trenér family slowly began to disappear from international aerobatic contests but the aircraft could be still seen at domestic championships and airshows. However, the aviation factory in Otrokovice created a legend that is still alive – it is exactly the Zlín Trenér that is the most-recognized Czechoslovak aircraft worldwide.

Today, almost 75 years since the maiden flight of the Z-26, several aircraft from the Trenér series can be still spotted all over the world. Although some of them are a part of classic aircraft collections and used only occasionally, there is a significant fleet of the Trenér aeroplanes being still used in aeroclubs, especially in the Czech Republic.

Despite their age, the Trenérs are tirelessly doing their everyday duty, used for towing gliders, touristic and sightseeing flights.