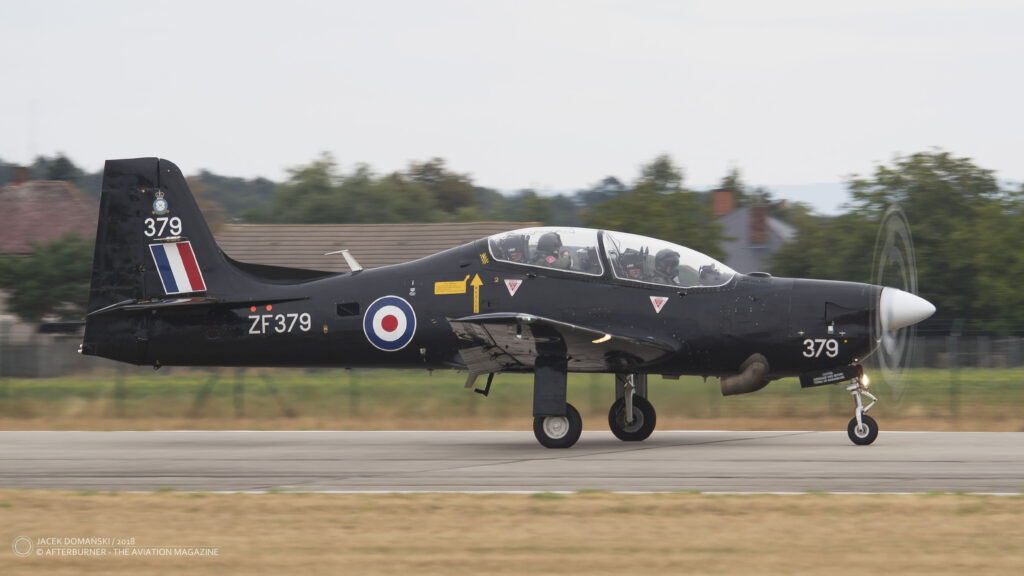 The development process of Tucano was launched in 1979, in cooperation with the Brazilian Air Force. The project aimed to create a domestic basic training aeroplane, being another step in governmental plan towards independence from foreign companies in strategic areas. The new aircraft had to meet all international standards but, at the same time, be of a simple construction as well as not expensive in production and maintenance.

On 16th August 1980, the prototype of EMB 312 trainer performed its maiden flight. At that time, the Embraer company had already secured the first order for 118 Tucanos for the Brazilian Air Force, shortly thereafter extended for another 50 aircraft.

The new Brazilian trainer that also featured a light combat capability, quickly became an international success. Apart from the domestic market, the Tucano were purchased by approximately twenty foreign air forces, mostly from the Southern America, Africa and the Middle East. There were more than 600 examples of the EMB 312 built until the aircraft was successfully replaced by its modernized variant, EMB 314 Super Tucano.

In 1984, Embraer started cooperation with Short Brothers, an aviation company based in Belfast, the Northern Ireland and commonly known for its Sunderland flying boat. Their common goal was to enter the British competition for a successor of Jet Provost basic trainer and propose the Tucano as a new training aircraft for the Royal Air Force. Among the competitors there were Pilatus PC-9, NDN-11 Turbo-Firecracker and AAC A.20 Wamira II.

On 21st March 1985, the Tucano was announced the winner and a purchase order for 130 aircraft was made.

The first Tucano under the British contract was built in Brazil and then shipped to Short factory in Belfast. It was a prototype example, used for testing engines, propeller and related systems. Finally, Garrett TPE331-12B turboprop engine was chosen as a powerplant for the Short Tucano, together with Hartzell four-blade propeller – the most significant differences from the Brazilian-made EMB 312s.

On 30th December 1986, the first serial-produced Short Tucano took-off to the sky. Deliveries to the RAF took approximately five years, with the last aircraft made on 25th January 1993. The S-312 – as the British-made Tucano was designated – was primarily used by No. 1 Flying Training School at Linton-on-Ouse airfield. Some aircraft of that type were also operated by No. 3 and No. 7 FTS.

Following the successful cooperation with the RAF, the Short company sold twelve aircraft to Kenya and additional sixteen for Kuwait, designated Tucano Mk.51 and Mk.52, respectively.

The RAF Tucanos were in active service until the 2000s, when first attempts to retire the fleet appeared. Nevertheless, the final date of withdrawal was being postponed several times, due to changes in plans regarding future training system of the RAF pilots. In the meantime, the number of operational S-312 was successively dropping and many of the already retired aircraft were sold to civilian owners, mostly in the USA. Eventually, the S-312 was succeeded by Beechcraft T-6C Texan II and the remaining Short Tucanos were officially retired in 2019.

In the common view, the Short Tucano is usually being associated with Oscar-winning composer, James Roy Horner. Known from soundtracks he wrote for Titanic, Avatar or Star Trek, Horner was also a passionate pilot and owed at least five aircraft. One of them was Short Tucano T1 (formerly ZF206 of the RAF) he acquired in 2013.

On 22nd June 2015, while flying in the vicinity of Santa Barbara, California; Horner crashed with his Tucano and was found dead at the scene. Investigation of that accident resumed with a conclusion that it was caused by the pilot´s mistake, while performing low flying among the mountains.

The pictured Short Tucano ZF379 joined the RAF fleet in March of 1992. The aircraft was operated by No. 1 Flying Training School until its retirement in 2019.

During 17th and 18th May 2019, over 20,000 spectators visited the 18th Helicopter Show – the aviation and rescue event organized annually by DSA Aviation Company at the Hradec Kralove Airport – and used the […]