Swiss Air Force future to be decided in September

In about a month, on 27th September 2020, the Swiss electorate will cast their votes in a national referendum. Among five decisions the Swiss shall have to take that day, there is an important question regarding the future of the Swiss Air Force – asking if the voters agree with the Federal Decree on the procurement of the new combat aircraft.

The decree was issued on 20th December 2019, being the first step on the long way to purchase the new fighter aircraft within the Air2030 programme, launched back in 2016. The four objectives of the programme include: acquiring a new combat aeroplanes to replace the F/A-18 fleet, purchase a long-range air defence system, modernization of airspace surveillance and mission control system (C2Air) and upgrade of radar installations. And the two last items on that list are also the most developed ones – in 2019 the SkyView system, manufactured by Thales, was already chosen by armasuisse (the Federal Office for Defence Procurement). 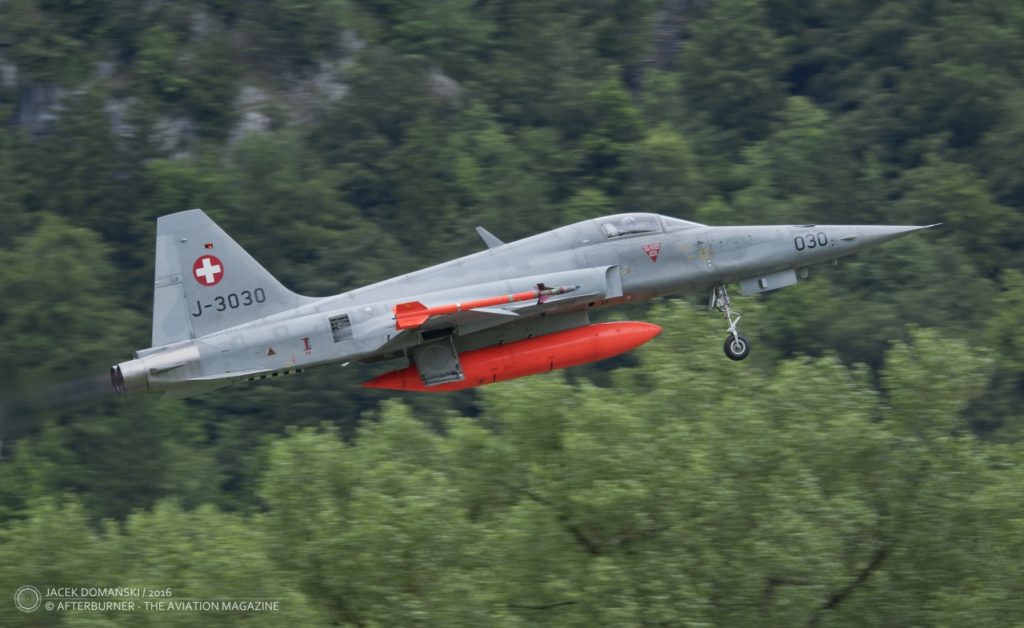 An estimated value of the first and second objective of the programme exceeds 8 billion CHF, with 6 billion CHF intended to cover the cost of the new fighter aircraft. Those amounts clearly make it the most expensive purchase in the modern Swiss history, so it is not surprising that the programme raised a lot of controversy and was opposed by many.

Switzerland already made the first attempt to purchase a new fighter jet back in 2014. At that time the F-5E/F fleet was intended to be replaced by 22 Gripen E fighters, at a price of 3 billion CHF. However, this project was also a subject of national referendum and was rejected by the Swiss with 53.4% votes against the purchase.

Such unexpected result of the referendum worked as a wake-up call for the Swiss government and military authorities. Not only the purchase policy had to be revised and made more transparent, but also the objectives and future of the Swiss armed forces had to be defined and shared with the voters. As a result, the Swiss Ministry of Defence launched ´Deine Armee´ (your army) programme, being an attempt to show the armed forces in the different light – as an attractive and reliable employer, socially bounded with the local communities and general public.

The Air2030 programme was the next step and the reasons behind it were related with the current inventory of the Swiss Air Force. Although still operating a significant number of jet fighters, the Swiss Air Force is facing an uncertain future as all those aircraft are either ageing or obsolete. 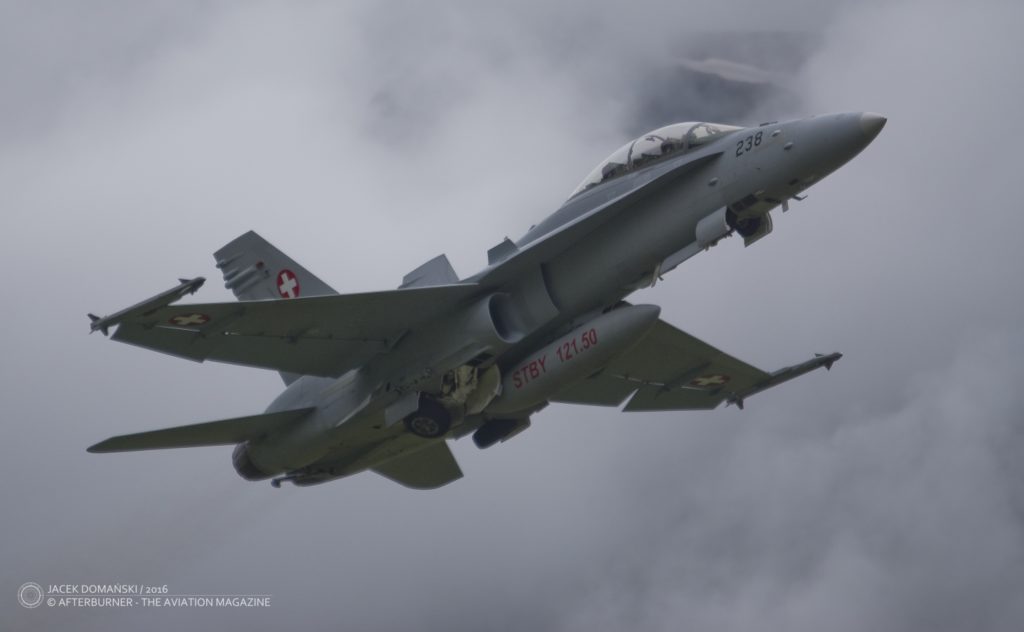 The backbone of the Swiss military aviation is F/A-18 Hornet, twin-engine supersonic fighter jet, delivered between 1996 and 1999. Currently there are thirty Hornets in service (25 of C, single-seat variant and 5 two-seaters in D, combat-training version) as four aircraft were lost in accidents. Despite several modifications and upgrades, the time of their withdrawal is coming quickly. The mid-life upgrade performed on the Swiss Hornets between 2004 and 2009 extended their operational cycle until 2020s. The Swiss Air Force already announced that the first F/A-18 Hornets are expected to be retired as soon as 2025.

Number two in the Swiss fighter fleet is Northrop F-5E/F Tiger II. Those jets were acquired between 1978 and 1985 and the Tiger fleet included 110 aircraft at its peak. At this moment, there are approximately 25 F-5E/F in service and the date of their purchase clearly tells that today – despite generally being a fighter jet of excellent performance and durability – the Swiss Tigers are just obsolete aircraft. It seems that 2020 will be the final year of F-5E/F active service in the Swiss Air Force, leaving only a few last fighters to fly within the Patrouille Suisse display team.

Those facts point that the 2020 referendum is more serious than the first on. Behind the simple question about purchasing the new fighter jets, there is existence or non-existence of the Swiss jet squadrons. In consequence, this referendum will basically decide about the future of the Swiss Air Force and the air defence system. The days of the Tiger II aircraft are already numbered and the Hornets can stay in active service for about ten years. Without a quick purchase of new fighter jet, the Swiss Air Force can be left without any supersonic fighter until 2030. 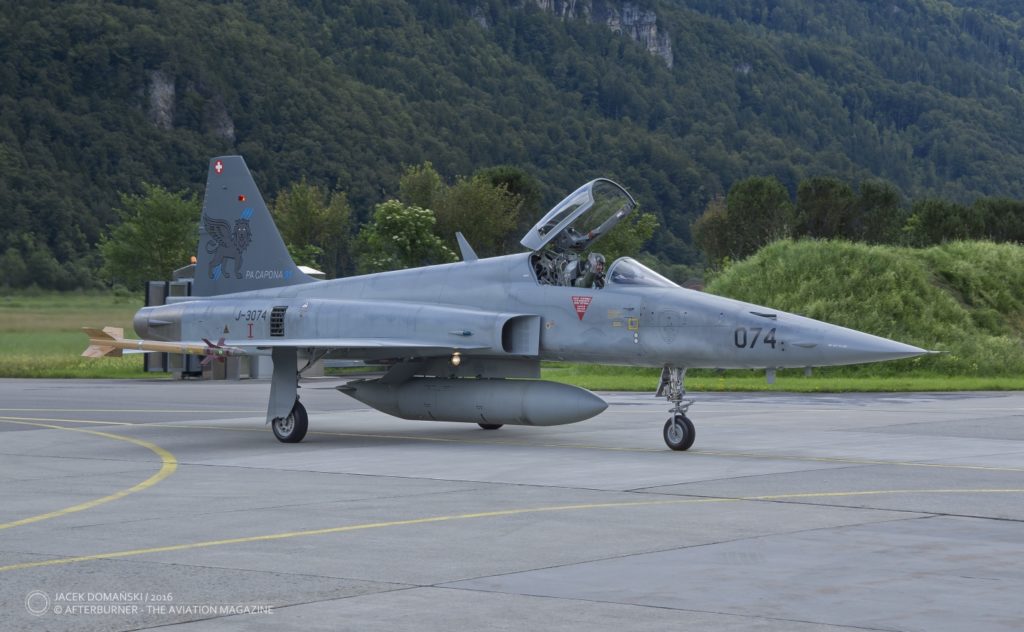 There are clear and understandable arguments for purchasing the new aircraft and keeping the fighter squadrons operational in the future. As presented by the Ministry of Defence and movements supporting the purchase, Switzerland needs both the ground-based air defence and the fighter jets, working within a coherent system. All elements of the current system are more than 20 years old and not suitable for further upgrades. And there is no alternative for the long-range missiles and fighter jets – no light combat/training aircraft nor drones can perform the air defence duties. Certainly, apart from the aforementioned tasks, there are many other military objectives that can be covered by a modern fighter jet.

In addition, Switzerland´s neutrality calls into question the future cooperation with the neighbouring countries. Although already existing, that cooperation can be limited any time in the future. A high-profile case of the Ethiopian Airlines aircraft that was hijacked in 2014 and landed at Geneva airport escorted by French and Italian jets, started a long lasting discussion about the Swiss Air Force objectives and resources. As a result it was decided to increase the budget and create the 24/7 QRA response duty since 2021 (instead of the current one, limited from 6:00 to 22:00 hours only).

Admittedly there are sufficient grounds for keeping the jet fighter fleet and being able to perform the air defence duties, but not everyone shares the same view. The left-wing parties, environmental organizations and the pacifist movement united together and managed to collect 66,000 signatures against the abovementioned Federal Decree. According to the Swiss law, any government decision can be challenged and voted in the national referendum, if at least 50,000 signatures were collected within 100 days. 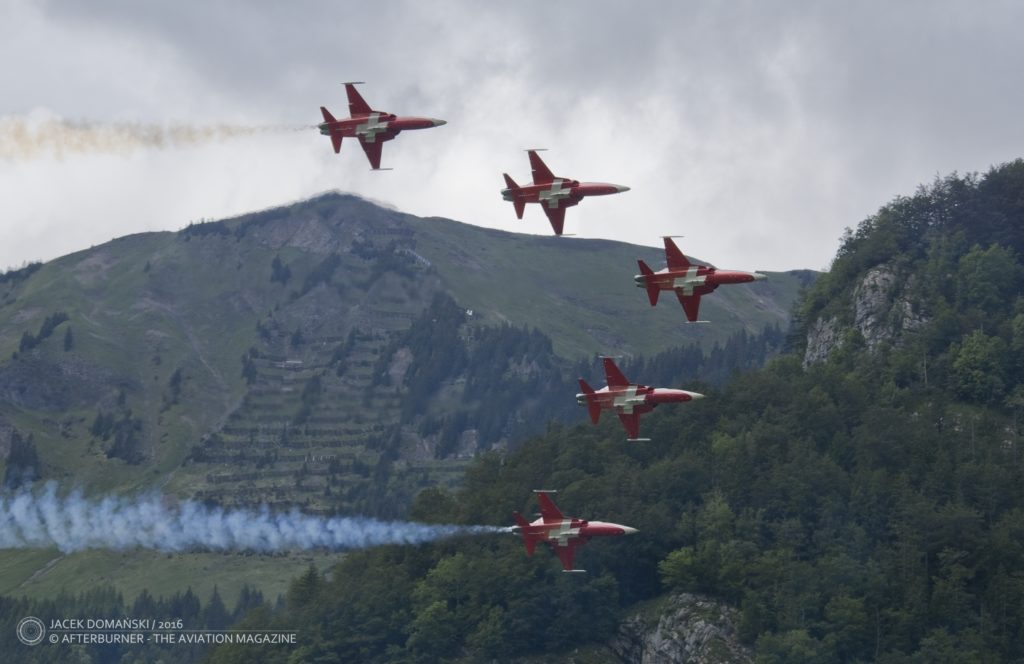 The union of opponents presented its own list of arguments, questioning the reason of purchasing new combat jets for the Swiss Air Force. One of the main reasons against the new fighter is the amount that must be spent on buying, training and further maintenance of the future Swiss Air Force fleet.

According to the opponents, spending approximately 24 billion CHF on the purchase and then operational service of the new aircraft will surely lead to significant reductions in education and social security. The Europe is now a safe place, any full-scale conflict with aerial warfare is unrealistic, so there is no need to spend billions on ´luxury jets´ (this is the exact term used by the ´no-jets initiative´) – a much better and wise choice would be to spend those money on education, health care, public safety, culture and social security.

In addition, those ´luxury jets´ are nothing else than the massive air-polluting devices. As an example, a flight hour of F/A-18 and its environmental impact is compared by the opponents to 100,000 kilometre car trip. Additional problems of noise pollution and wasting fuel were also brought into the public attention (it should be said here that due to the noise limits in the country, the Swiss Air Force already had to intensify training flights abroad, within the NATO partnership programme).

Subsequently, unlike in the 2014 referendum, the voters will now decide just about the purchase itself, not about the number and type of the aircraft to be acquired. And this created another concern against the Federal Decree from 2019, as the Swiss government would still have the possibility to freely decide about the number of aircraft, manufacturer and the type. 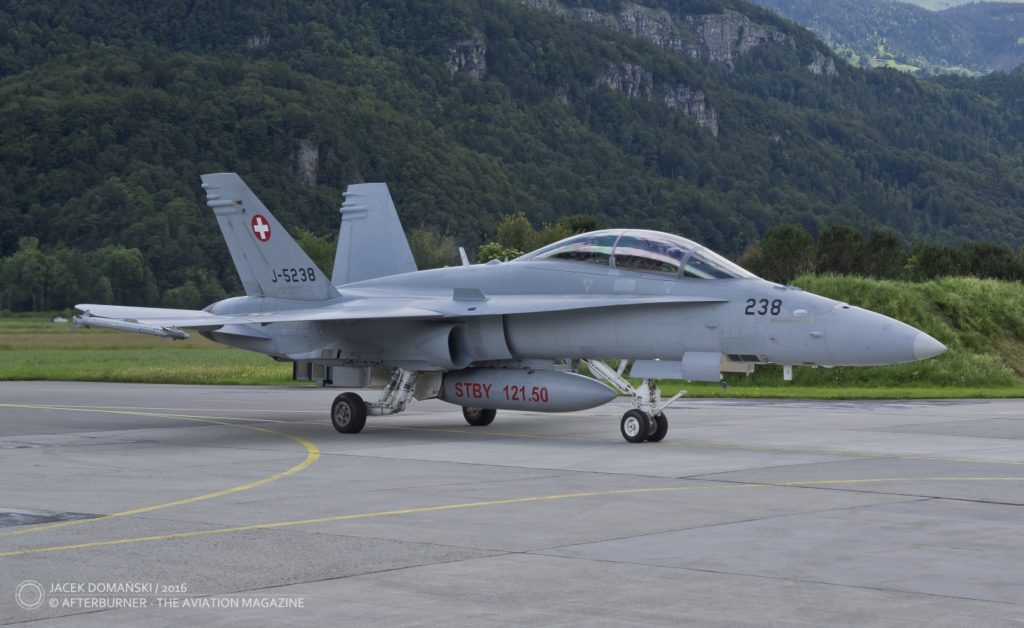 And last, but not least, there is an argument against buying ´a Trump jet´ – because  two of four aircraft evaluated by the Swiss Air Force are manufactured in the USA. An unstable foreign policy and other decisions of the US authorities do not guarantee any security and independence in case of buying and American-made aircraft. Nowadays, when the aircraft capability is depending on the software upgrades and other shared resources, the service of future Swiss jet can be limited by the manufacturer, based on the decision of foreign government.

According to the ´no-jets initiative´, there is still no need to buy a supersonic jet fighter to maintain the air defence capability. Due to the operational lifecycle of the F/A-18, this task can be performed by the Swiss Hornets for next ten or even more years. Especially, that there was almost 1 billion CHF already spent for their upgrades. And later, in the indefinite future, they could be replaced by a less expensive and less sophisticated ´light jet´ (Leonardo M-346 FA was one of the given examples).

Today, in about a month before the referendum date, it is still hard to predict how the Swiss would vote on 27th September. Especially, that the fighter-related question is just one of the pacifist-focused questions in the referendum, the other are asking for introducing a ban on arms export and prohibiting the funding of arms manufacturers all over the world.

The Swiss government is trying to convince the public opinion by adding an offset clause to the contract. An aircraft manufacturer that will be awarded the contract must return at least 60% of the purchase price by investing this amount in Switzerland. In addition, the offset amount will be shared proportionally among the regions, based on the language.

If the Swiss voters say ´yes´ on 27th September, the Federal Council will decide about the type and the number of aircraft to be bought. The estimation is that 30 – 40 fighters should be bought, and the Swiss Air Force is currently evaluating four aircraft: Rafale, Eurofighter Typhoon, F-35 Lightning II and F/A-18 Super Hornet.

If the Swiss say ´no´, the future of the Swiss Air Force would be uncertain, and the current Swiss defence policy will need to be revised. 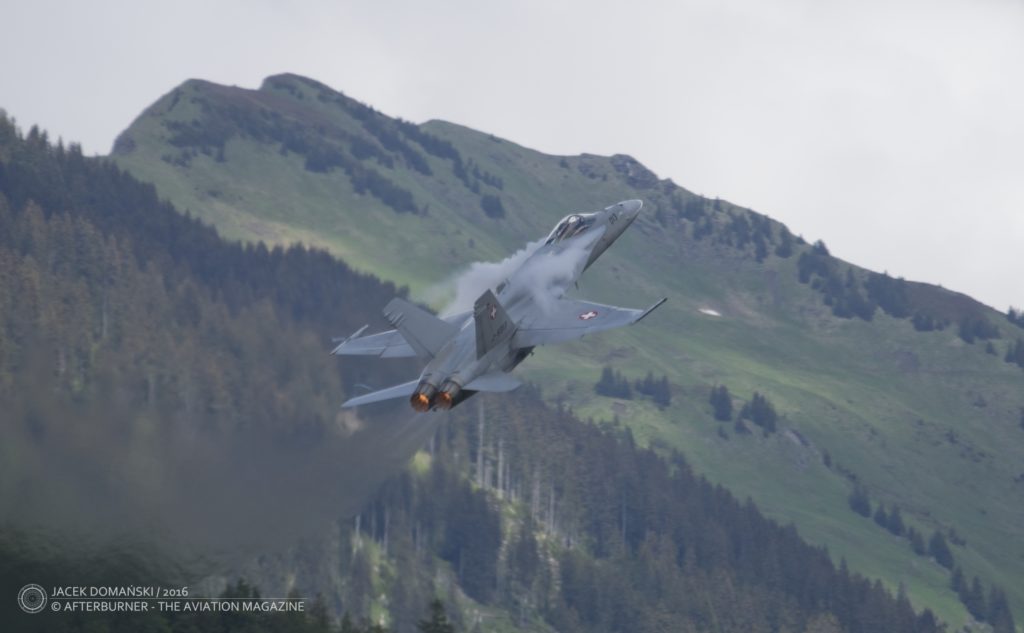 F/A-18C Hornet while taking-off from Meiringen