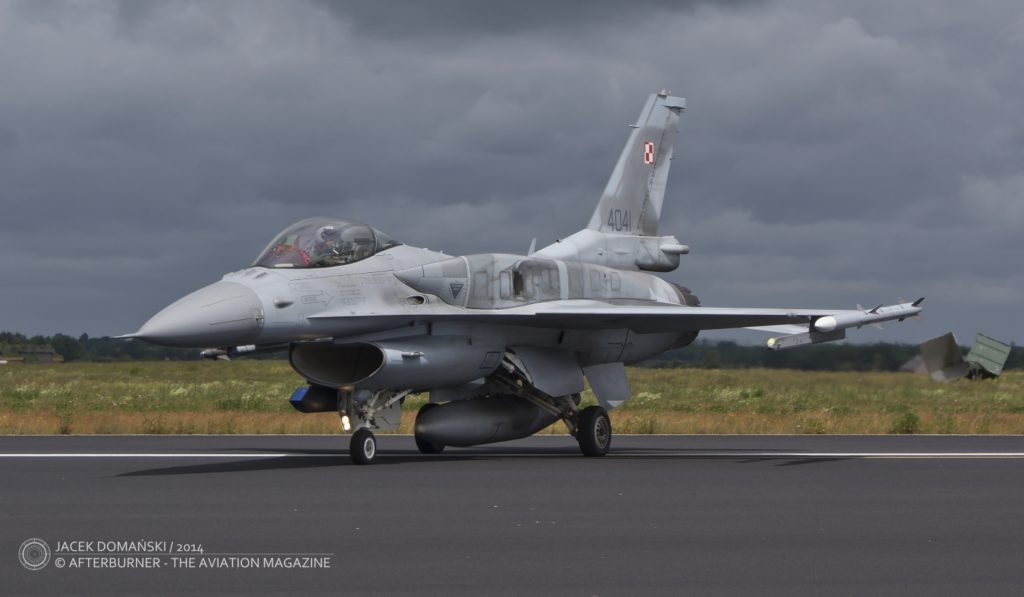 The 2014 edition of the multinational, annual live-fly exercise and Tiger – squadron gathering took place between 16th and 26th June, at Fliegerhorst Schleswig/Jagel in Germany. The participating seventeen member squadrons from NATO Tiger Association and Partnership for Peace programme were hosted by Taktisches Luftwaffengeschwader 51 ´Immelmann´.

TaktLwG 51 ´I´, formerly – until September 2013 – known as Aufklärungsgeschwader 51 ´Immelmann´ is operating the Panavia Tornado aircraft with their home air base in Jagel. The history of the airfield dates back to the Great War years, it was built in 1916 and always used only for the military purposes. During the World War II the night fighters were based there, including the Messerschmitt Me 262 jets, then between 1945 and 1958 it was known operated by the Royal Air Force and known as RAF Schleswigland. In 1948/1949 the air base became one of the main hubs of the Berlin Airlift operation – RAF codename: Operation Plainfare. The air base was also used for training purposes by the Royal Norwegian Air Force and visited by King Olav V of Norway in 1955.

With the establishment of the new Bundeswehr, the RAF Schleswingland was closed and starting from 1958, consistently transferred to the German Navy. Then, once back in German possession, the air base was re-named Fliegerhorst Schleswig/Jagel and became the home for the newly formed Marinefliegergeschwader 1.

The fleet of more than 70 aircraft from 11 countries participated in the NATO Tiger Meet 2014, including F-16 Fighting Falcons from Belgium, the Netherlands, Poland and Turkey; Eurofighter and Tornado jets from Germany; Swiss Air Force F-18 Hornets; Mirage 2000 and Rafale fighters from France; Saab 105OEa from Austria and JAS-39 Gripens from the Czech Republic and Hungary. The participating helicopter squadrons operated Mi-24/35, Mi-171, EC 665 Tiger and AW 101 Merlin. Additionally, the flying training scenarios of the exercise were supported by Learjet from GFD company, used for the electronic jamming and E-3A AWACS aircraft operating from Norway.

The participation of the neutral countries in the NATO-related military exercise – even if based on the purely informal association – might seem surprising, but the aforementioned Partnership for Peace is the explanation. The programme, launched in 1994, is aimed at ´creating trust between NATO and other states in Europe and the former Soviet Union´. More than 20 countries are the member, including Switzerland and Austria.

Even if sometimes it seems like an airshow due to all those tiger-painted aircrafts and the fancy crew uniforms, the NATO Tiger Meet is a real, live-fly military exercise. The squadrons meet to share the experience and ideas, better know each other and to establish a feeling of solidarity. The live-fly trainings are just one of the meeting goals, supported by the famous ´Tiger games´ and other activities together creating the unique ´Tiger spirit´. The Best Painted Tiger Aircraft and The Best Looking Uniform contests are usually organized every year, apart from the other tactical and flying competitions.

The designated training zone was located over the North Sea and covered the area almost as big as the Netherlands are – 160 x 200 nautical miles. More than 600 Composite Air Operations (COMAO) and other training missions were flown during the exercise.

Usually, during the NATO Tiger Meet, a spotter focused event is also organized, allowing the previously registered group of Spotters to visit the airfield during one or more training days. In 2014 there were two official spotter days in Jagel, organized on Thursday of the first and on Monday of the second training week.

The spotting area was well-organized, located inside the air base and close to the runway and taxiways. Unfortunately, the weather was again the most troublemaking factor and several thunderstorms together with the heavy wind were the weather highlights of the 2014 Tiger Meet. During the first spotter day the weather was changing all the time and the photographers had to fight with heavy wind, rain and bad light. However, much friendly and better weather conditions were reported on the second spotter day.

The spotter day programme included take-offs and landings for the morning and afternoon training missions and additionally the presentation of the participating aircraft on the taxiway, in front of the spotter´s line. And this was really an awesome opportunity for all aviation enthusiasts, especially that it was exactly the time with the best photo conditions of the day.

Douglas DC-6B, OE-LDM, from the Flying Bulls collection of Hangar 7 in Salzburg, just after its arrival to Pardubice, Czech Republic, for 2014 edition of Aviatická pouť (Aviation Fair) air show. DC-6 is the biggest, […]

A few kilometres from Cuxhaven, the well-known tourist spot of the North Sea, the Nordholz Naval Airbase (Fliegerhorst Nordholz) is located. And next to the main entrance to the base, one of the most interesting […]