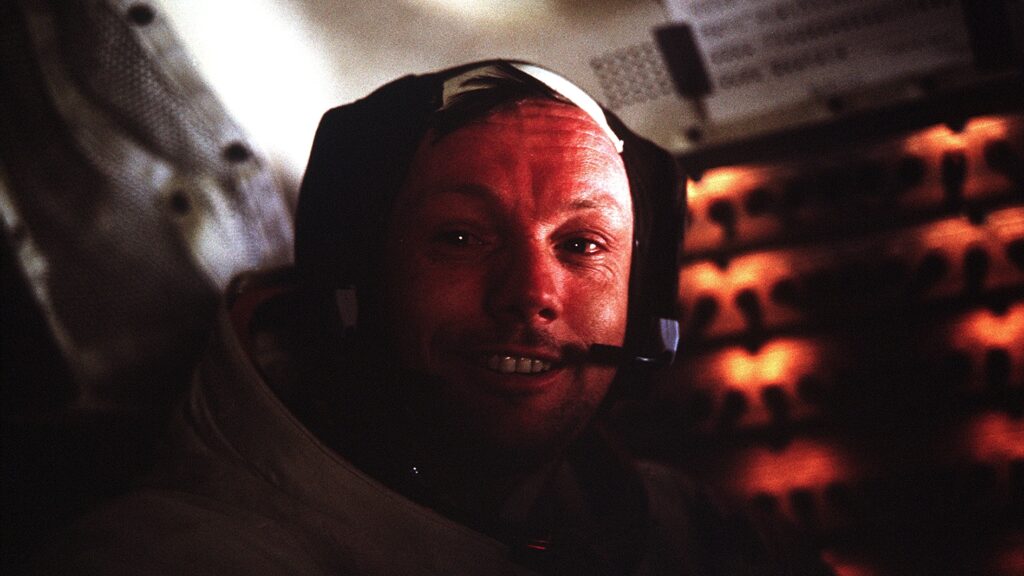 On 5th August 1930, Neil Armstrong, the first man to step on the Moon, was born.

Neil Alden Armstrong was born as the son of Stephen and Viola Armstrong, on a farm belonging to his grandparents in Wapakoneta, Ohio. Due to the fact that his father was an auditor for the state of Ohio at the time, Neil Armstrong grew up in several towns such as Warren, Jefferson, Ravenna, St. Marys, and Upper Sandusky, before his parents eventually settled in the abovementioned Wapakoneta.

In 1932, shortly after Neil Armstrong’s second birthday, his father took him to the National Air Races in Cleveland. That event planted the seed of passion for aviation in the soul of the future astronaut. At the age of six, Armstrong took his first ever flight in an aeroplane, a Ford Tri-Motor in Warren, which only deepened his interest in aeronautics.

Already at the age of fifteen, at an airport near Wapakoneta, young Neil Armstrong started learning to fly. At the same time, he was taking on a number of jobs both at the airport and in the town to earn money for further lessons at the controls of Aeronca Champion aircraft. Only a year later he officially became a pilot, obtaining pilot’s license.

In 1947, Armstrong graduated from Blume High School in Wakaponeta. Shortly afterwards, he received a scholarship from the US Navy and began studying aeronautical engineering at Purdue University.

However, in 1949 he was called up to serve as a pilot in the Navy. Next year, the Korean War broke out, in which the United States took an active part. Soon after, Neil Armstrong was deployed to Korea, where he carried out 78 combat sorties from the deck of USS Essex aircraft carrier.

In 1952, the war was almost over and Armstrong finished his service in naval aviation. He returned to Purdue University and completed the studies with a bachelor’s degree. Then Neil Armstrong joined the National Advisory Committee for Aeronautics (NACA), where he initially worked at the NACA Lewis Research Center in Cleveland. Next, in the mid-1950s, Armstrong was assigned to NASA Flight Research Center in Edwards, California and became  a test pilot there. From that point, his aviation career quickly gained momentum.

While working for the abovementioned research centre, Neil Armstrong had the opportunity to fly more than 200 different types of aircraft, including the famous North American X-15 hypersonic rocket-powered experimental aircraft. At the same time, the future astrounaut continued his graduate studies at the University of Southern California, completing them with a master of science degree in aerospace engineering.

In 1962, Neil Armstrong, as one of nine members of the second group, was selected a candidate for astronaut, being the only one with experience in flying rocket-powered aircraft. Joining the NASA Astronaut Corps, he moved to El Lago in Texas. That location was a seat of the NASA Manned Spacecraft Center, where Armstrong soon began the four-year training for the NASA Apollo programme.

In 1963, NASA launched Project Gemini, the second US manned spaceflight programme. Its main objective was to work on space travel techniques for the purposes of the next programme, called Apollo – and focused on sending the first man on the Moon.

Initially, Neil Armstrong was assigned to the backup crew for the Gemini 5 mission as pilot-in-command, with another astronaut, Elliot See, as pilot. However, Armstrong had to wait another three years for his first space flight.

Neil Armstrong finally launched into space on 16th March 1966, as command pilot of the Gemini 8 mission, with astronaut David Scott as pilot. The objective of that mission was the first ever docking to an unmanned target spacecraft Agena, in Earth orbit. The manoeuvre went smoothly and without problems. However, at some point, due to a thruster malfunction in the target vehicle, the two spacecraft coupled together began to pitch and roll uncontrollably. Fortunately, Armstrong and Scott managed to undock the Gemini spacecraft and safely returned to Earth making an emergency landing in Pacific waters. The mission marked Armstrong as the second time that US civilian flew into space and it was the first time that US civilian flew into orbit.

Three years later, the most remarkable episode in Armstrong’s space career took place. On 16th July 1969, mission Apollo 11 began, with Neil Armstrong as the commander, Michael Collins, the command module pilot, and Edwin E. ´Buzz´ Aldrin, the lander pilot. They launched aboard the Saturn V rocket to land on the Moon for the first time in history, four days later.

The crew of the Apollo 11 mission landed on the surface of the ‘silver globe’ at 20:17 UTC, on 20th July 1969. Few hours later – and already on 21st July at 2:56 UTC – Neil Alden Armstrong became the first man in history to set foot on the Moon, uttering the famous words: ‘That’s one small step for a man, one giant leap for mankind’.

He was soon joined by Edwin Aldrin, who thus made history as the second man to step on the lunar surface. In total, the two Astronauts spent about two and a half hours walking on the Earth’s natural satellite, collecting samples of lunar soil and rocks, performing experiments and taking photographic documentation.

On the 24th of July, at 16:50 UTC, Armstrong, Aldrin and Collins returned to Earth, splashing down safely in the waters of the Pacific Ocean, from which they were soon picked up by the crew of the USS Hornet aircraft carrier.

Neil Armstrong received a number of distinctions and awards for his participation in the Apollo 11 mission. These included the Medal of Freedom, representing the highest decoration given to a US civilian; the NASA Distinguished Service Medal, the NASA Exceptional Service Medal, the Congressional Space Medal of Honour and many other U.S. and international awards and honours.

After travelling to the Moon, Armstrong was for a short time appointed Deputy Associate Administrator for Aeronautics at NASA and was responsible for managing and coordinating all of the agency’s projects in the field of aeronautics.

In 1971, Armstrong left NASA and later that year became professor of aerospace engineering at the University of Cincinnati, where he worked until 1979.

From 1982 to 1992, Neil Armstrong was chairman at Computing Technologies for Aviation, Inc. of Charlottesville, Virginia and then chairman of the board at AIL Systems, Inc. of Deer Park, New York. During his later years lived on his farm in Lebanon, Ohio.

On 7th August 2012, Neil Armstrong underwent bypass surgery due to coronary artery disease. Although initially he was recovering well, he soon developed post-surgery complications. Sadly, the first man to step on the Moon, died less than three weeks later on 25th August, at the age of 82.

The world has commemorated Neil Armstrong in many ways. Among others, one of the lunar craters located 50 kilometres from the landing site of the Apollo 11 mission is named Armstrong. There is an asteroid named 6469 Armstrong. Many schools, streets and buildings in the United States and all around the world have been named after him.