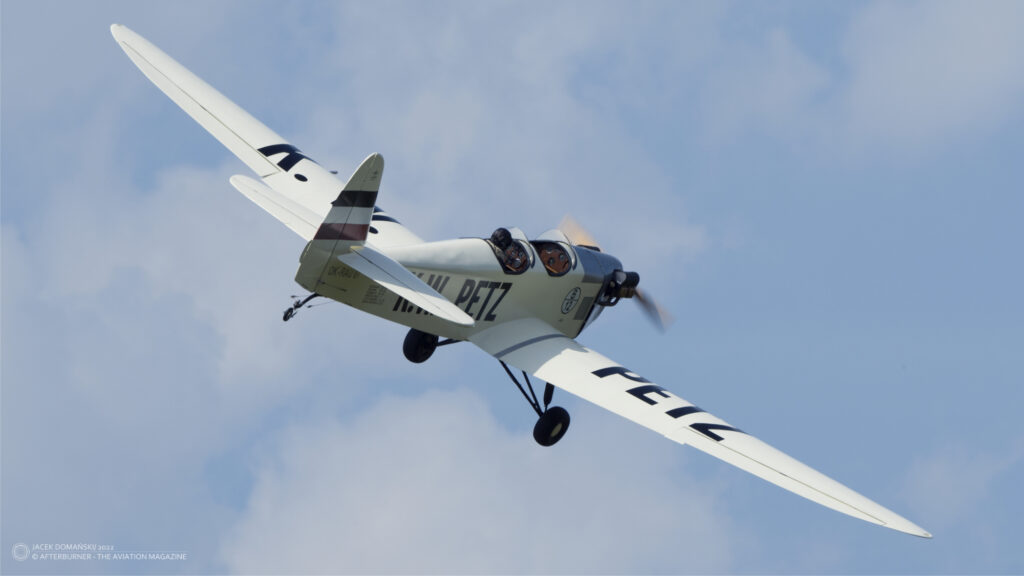 The Challenge, as the contest is commonly abbreviated, was inspired by the International Light Aircraft Contest, held one year earlier in France. However, this time the competition was approved and supervised by Fédération Aéronautique Internationale (English: World Air Sports Federation – FAI), therefore becoming the first official international aviation contest.

One of the main goals of the Challenge was to boost popularity of sport aircraft and was a trigger to develop better, and more advanced, tourist aeroplanes. Rules of the first edition were pretty easy and included technical evaluation, quick engine start competition, wing folding test (commonly known as ´garage test´) and fuel consumption trial. All crews consisted of two men, pilot and on-board mechanic.

Among participants of the 1929 edition there were crews from six countries: France, United Kingdom, Germany, Italy, Czechoslovakia and Switzerland. At least officially, because the truth was that national teams included some foreigners – there was a Canadian pilot flying for Germany or two Belgians in the French team. The first edition of the contest already reported its first woman aviator, Winifred Spooner flying for the British team.

The aircraft participating in the Challenge 1929 represented a variety of then-popular light aeroplanes, such as BFW M.23b, Klemm L.25 Ia and Junkers A.50 (Germany), Avia BH-11 (Czechoslovakia), de Havilland Gipsy Moth (UK), Cant 26 and Breda Ba.15 (Italy) or Caudron C.113 (France). An important fact was that, unlike in the future editions of the Challenge, none of the aircraft was built strictly for purpose of that competition.

Technical part of the contest was won ex equo by three teams: German (Darmstadt D-18), Czechoslovak (BH-11) and Switzerland (L.25). Interestingly, places from 4 to 10 were all taken by German crews.

A rally over Europe was the final competition of the Challenge 1929. Its route exceeded 5,000 km and led from Orly airfield in Paris, through Switzerland, Italy, France, Yugoslavia, Romania, Hungary, Austria, Czechoslovakia, Germany, the Netherlands and Belgium, back to Paris. Aircraft and their crews were evaluated for their average cruise speed, keeping the flight schedule and lack of repairs. A total number of forty seven teams entered that trial but only thirty one of them finished it successfully.

Only two teams managed to reach maximum score of 119 points for the rally. The first one was German crew of pilot Fritz Morzik and Adolf Schiehl (BFW M.23b), the second was the abovementioned Canadian flying for Germany, John Carberry in Raab-Katzenstein RK.25.

Although Morzik and Schiehl scored only 19.5 points in the technical part of the contest, the winning score in the rally gave them 138.5 points in total – the top overall result of the Challenge 1929. The second place was taken by Capt. Hubert Broad from the UK, who was third in the rally and fifteenth in the technical trials, scoring together 135.25 points. The bronze medal was awarded to Carberry, who achieved 131 points. The winners and other crews placed up to 16th position also received a cash prize.

An interesting fact is that during the first editon of the Challenge, the technical trials were of minor importance. Among three winning crews, the best in technical part of the competition was Broad, who scored 26.25 points. Morzik and Carberry were outside the top-twenty, receiving 19.5 and only 12 points, respectively.

On the other hand, the crews that received top scores in the technical part of the contest were practically not visible during the rally. Among the teams that took ex equo the first position in the first stage of the Challenge, František Klepš from Czechoslovakia was the most successful one. He received 94 points for the rally and took the seventh place overall. Another one, Hans Wirth from Switzerland, scored only 81.75 points during the second stage and finally was placed fifteenth.

The first Challenge was so successful and attracted so much attention that it was decided to continue with the contest. The next edition was scheduled for 1930 and its organization was assigned to German Aero Club, because of Morzik´s winning score.

The 1930 edition was held between 18th July and 8th August with sixty participating aircraft from six countries: France, Germany, Poland, Spain, Switzerland and the UK. Among the crews there were all three winners of the first Challenge, as well as already mentioned Winifred Spooner (this time supported by another British woman aviator, Lady Mary Bailey).

The competition was held at Berlin-Staaken airfield and rules were similar to the 1929 edition. Nevertheless, for the first time, two types of aircraft were intentionally upgraded for the purpose of the contest. They were BFW M.23c and Klemm L.25E, both equipped with more powerful engines.

This time, the rally across Europe was opening the competition. Its route covered more than 7,500 km over the West European countries: Germany, France, United Kingdom, Spain, Switzerland and Austria. Similarly to the first edition, cruise speed, flight regularity and lack of technical failures were evaluated. The rally was worth 270 points, nevertheless, lesson from the first Challenge was learned. In 1930, the best possible score in the rally could bring only 54% of the total maximum score, comparing to 72% in 1929.

There were no surprises during the 1930 rally as all winners of the first edition repeated their achievement. Capt. Broad became the first, scoring the maximum number of points, John Carberry – this time flying for the UK in Monocoupe 110 – was the second, with 268 points, and Morzik was the fourth, receiving 263 points. The third was Reinhold Poss from Germany, flying the upgraded Klemm L.25E, with 264 points. Poss was also participating in the first Challenge and took the fifteenth place then, together with Wirth.

The technical trials included the ´garage test´, quick engine start competition, evaluation of aeroplane construction with additional points given for comfort, safety and equipment, as well as possibility of dismantling the aircraft for transport. A significant change from the first edition was a short take-off and landing trials that were added to the technical stage of the Challenge.

After the technical evaluation of the aircraft, the leading crews were all-German: Poss, Oskar Notz (Klemm L.25E) and Morzik. Carberry was placed the fourth, as he didn´t score any points in quick wing folding competition but then received the highest score for the evaluation of his aircraft construction. An interesting fact is that Carberry´s Monocoupe, together with RWD-2 from Poland and Avro Avian from the UK, did not feature the possibility of folding their wings for hangaring, and thus lost that part of the competition.

The short take-off and landing competition was also dominated by the Germans. Klemm and BFW aeroplanes took places from the first to nineth, with the only exception of Winifred Spooned in her DH.60G, who finished sixth, and John Carberry, who took the tenth place.

That final technical trials had affected the closing results of the Challenge. Eventually, the first place was taken by Morzik (427 points), the silver medal was awarded to Poss (423 points) and bronze was taken by Notz (419). Winnifred Spooner was the fourth, Carberry finished sixth and Broad took the eight place. Only thirty five crews completed the competition, as much as twenty of them were German teams.

The next edition of the Challenge was planned for 1932 and again, because of Morzik´s winning score, was going to be organized in Germany. Nevertheless, the edition of the competition was supposed to bring several changes to its rules and general performance.

But this story will be told in the second article about the Challenge series.