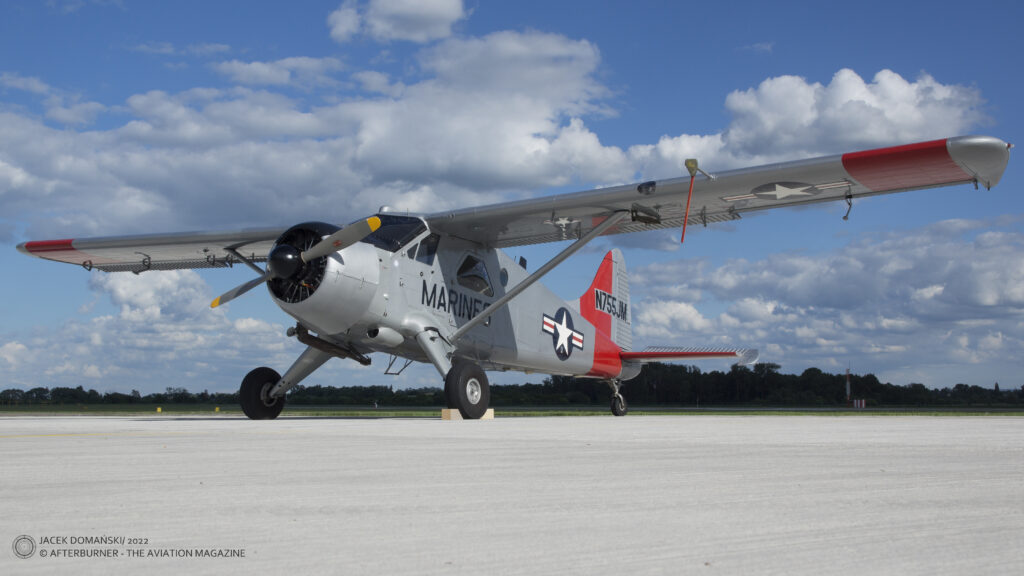 The story of ´the best bush aircraft ever made´ started shortly after the World War II. The management of de Havilland Canada (DHC) correctly predicted a drop in orders from military sector and focused on civil aircraft instead. A market research done by Punch Dickins, the newly hired chief salesman of the company, showed there was a huge demand for a small, overpowered aeroplane with a short take-off and landing (STOL) ability, as well as possibility to be flown with different types of undercarriage – wheels, skies or floats.

On 17th September 1946, the construction team of the new aeroplane was officially established and included Phil Garratt (former RFC pilot and then Managing Director of the DHC) as the leader, Fred Buller, Richard Hiscocks, Jim Houston and Wsiewołod Jakimiuk (pre-war designer of the Polish PZL company, working for the DHC company since 1940). They were assigned the task of creating all-metal aircraft, easy and relatively cheap in maintenance, with its overall performance to be secondary to the STOL capability. Following the DHC marketing policy of naming their aircraft after animals, it was decided to call the new aeroplane after the beaver.

On 16th August 1947, the DHC-2 Beaver took-off for its maiden flight, flown by Russel Bannock – a former Canadian fighter ace and at that time chief test pilot of the DHC company. Although the aeroplane seemed to meet the initial expectations, a series of evaluation flights lasted until the spring of 1948 and several adjustments to its design were made.

The first serial Beaver was delivered to Ontario Department of Lands and Forests in April of 1948. Nevertheless, the initial sales were low – just a two to three DHC-2 aircraft per month – and there were no signs of abovementioned expected high demand for such type of aircraft.

It all changed with the order that came from the US Army. It was a result of a competition for a new army utility aircraft and the DHC-2 was the winner, over Cessna 195. The US Army ordered a total of 970 aeroplanes and that instantly boosted the sales for both military and civilian sectors.

Shortly thereafter, the DHC-2 Beaver turned out to be the most successful utility aircraft in history of Canadian aviation manufacturing. More than 1,600 aeroplanes of that type were built and sold to sixty five countries all over the world. They were used by thirty one military operators – both the air forces and navies, government agencies (such as the Finnish Border Guards or the Royal Canadian Mounted Police), as well as by various civilian companies and private pilots.

The Beaver proved itself successful in all climate conditions, including desert, rain forest and high mountains. It was also used in the coldest areas, by the RAAF Antarctic Flight and during the 1958 expedition to the South Pole, led by famous Sir Edward Hillary (the DHC-2 was then operated by the RNZAF). In 1987, the Engineering Centennial Board of Canada recognized the DHC-2 Beaver as one of top ten Canadian engineering achievements of the 20th century.

The DHC-2 also opened the series of successful, all STOL-capable, aircraft made at the DHC company – Otter, Caribou, Buffalo, Twin Otter and finally the four-engine Dash 7. There was also a turboprop variant of the DHC-2, named the Turbo Beaver and manufactured in sixty examples. Production of the DHC-2 Beaver ceased in 1967.

List of the Beaver variants includes the US military versions (L-20A and L-20B, in 1962 re-designated as U-6A and U-6B, respectively), the British Army variant named AL Mk.1, as well as several after-market conversions with turboprop engines.

Today, the Beaver is still a popular bush aircraft and several of them are being flown by private operators.

The aircraft shown within our Photo of the Week series was manufactured as L-20A and delivered to the US Army in 1957 (56-0402). In 1962, it was redesignated U-6A and since 1972 retired from operational service. After another few years spent in the storage, that DHC-2 was sold to one of governmental agencies and then to a private operator.

During following years, the Beaver changed owners several times and finally, since April 2018, found its current home at Plzeň-Line airfield, Czech Republic. The aeroplane is a frequent participant of local aviation events, however mostly available at their static displays.

Wednesday, 13th May 2020, marked the 109th anniversary of famous flight from Pardubice to Prague, performed by one of aviation pioneers, Jan Kašpar. A unique event with the name ´In homage to aviation personalities of […]

On 8th April 1950, four Lavochkin La-11 fighters intercepted a US Navy aircraft, performing signal intelligence (SIGNIT) mission off the Soviet coast of the Baltic Sea. That aircraft, a Consolidated PB4Y-2 Privateer, was shot down […]