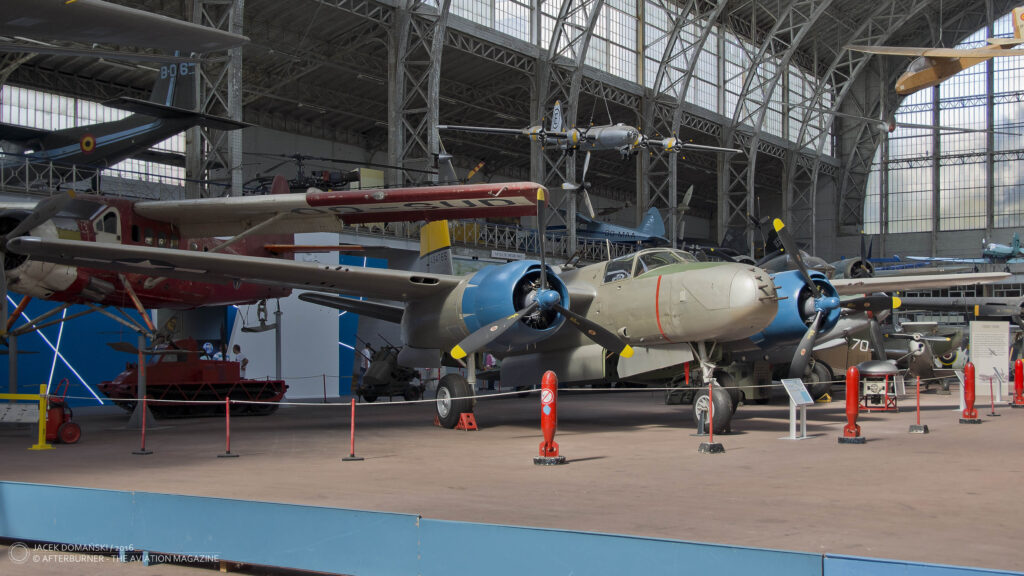 The A-26 was developed in the early 1940s as a direct successor of a well-known Douglas A-20 Havoc (also known as DB-7 or Boston), one of the iconic aircraft of the World War II. The prototype, designated as XA-26, performed its maiden flight on 10th July 1942. Little more than a year later, on 10th September 1943, the first serial manufactured A-26 aircraft were delivered to the USAAF.

Initially, the aircraft was made in two basic configurations – ´B´ version with a gun-nose that could be equipped with a combination of machine guns and cannons; and ´C´ variant featuring a glass-nose equipped with a Norden bombsight for medium-altitude missions. The most popular combination of the B-nose, with six 0.50 calibre M2 machine guns, was officially named ´all-purpose´ but usually the name of ´six-gun nose´ was used. Later, the armament was increased to eight machine guns in the nose and six in wings – which resulted in an incredible firepower of fourteen Browning M2 guns.

Officially the A-26B debuted in combat on 23rd June 1944, during a mission in the Southwest Pacific theatre of operations, within the Fifth Air Force. The first European operational use of the Invader – as was the official name of the aircraft – is dated on 6th September 1944.

Regrettably, the A-26 was not widely adopted at the Pacific theatre. The Invader was criticised for being not adequate for the role of close support aircraft and the USAAF squadrons still preferred the old A-20. Nevertheless, the new aircraft received a much warmer reception in Europe. There, it was successfully being used as a bomber and attack aeroplane, as well in reconnaissance and night interdiction missions.

After the World War II, the Invaders were used by the USAF, as well as the French and Portuguese air forces. The A-26s also participated in several local conflicts, being operated by the CIA and not officially recognized air forces. Those ´unofficial´ Invaders participated in the Bay of Pigs Invasion, Operation Haik or Dragon operations in Congo. Moreover, two aircraft of that type were operated by Biafra air force.

Then, starting from the late 1950s, the Invaders were slowly being withdrawn from their service in the USAF and then were acquired by several air forces in the Central and South America. They served there until the early 1980s when the last operational A-26s were retired from the Colombian Air Force.

Apart from the above mentioned two main variants of the A-26 Invader there were plenty of prototypes and conversions, both authorized by the manufacturer and unofficial. Moreover, with the establishment of the USAF, the official designation of the aircraft was changed for B-26 and used between 1948 and 1965. It often leads into confusion with Martin B-26 Marauder.

Production of the Douglas A-26 Invader was ceased at the end of the World War II, after manufacturing of approximately 2,500 aircraft of that type in all variants. The Invader is often indicated as the only American bomber to participate in three wars – the Second World War, the Korean War and the Vietnam War.

The pictured aircraft, exhibited in Brussels museum, was manufactured in 1943 and initially was operated by the USAAF, but never used in combat. After the war, it was retired from active service and converted for civilian use. However, not much about the owners is known, apart from two civilian registrations NL67160 and D-CAFY, the latter only reserved but not used.

Since the late 1960s that A-26B was stored in Belgium and somewhere in the middle of a next decade it was acquired by the Royal Museum of the Armed Forces and Military History. After renovation, its initial military markings were restored together with a nose art and nickname ´Mission Completed´. The second renovation was performed in 2009.