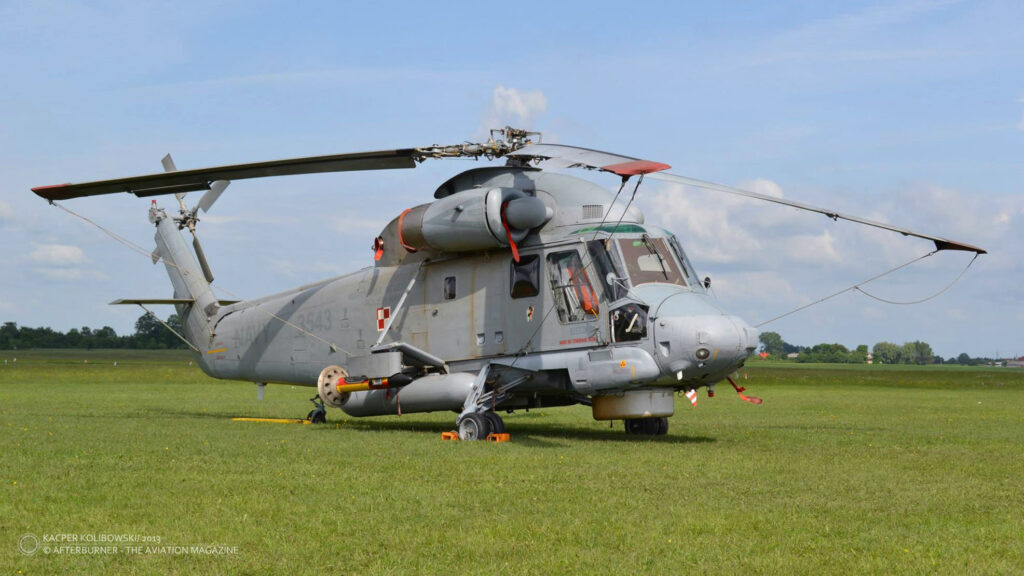 The history of SH-2 helicopter dates back to 1959, when the US Navy launched a competition addressed to private aviation manufacturers with the aim to develop a new, multi-purpose and all-weather maritime helicopter of relatively small size. Among these companies there was Kaman Aircraft Corporation that proposed a helicopter designated K-20 – a compact-size rotorcraft, powered by single General Electric T58-8F turboshaft engine and four-blade main and tail rotors. That design was finally announced the winner of the Navy contest. As a consequence, by the end of 1957, the company was awarded a contract to build four prototypes and then twelve serial examples of the helicopter, under the official designation HU2K-1.

In the meantime, the Royal Canadian Navy was also looking for an anti-submarine warfare (ASW) helicopter. It seemed that Kaman rotorcraft would be the best choice and in 1960, Canada initially planned to purchase twelve HU2Ks.

However, as a result of several factors, such as price increase and concerns raised among Canadian officials regarding performance of the rotorcraft forecasted by its manufacturer, the order was put on hold until the US Navy tests are completed. In fact, these evaluation flights have soon revealed that the HU2K needed further refinement and, therefore, did not meet Canadian requirements at the time. As a result, in late 1961 the choice of the Royal Canadian Navy finally fell on Sikorsky CH-124 Sea King helicopter.

In 1962, the Kaman helicopter was introduced into service with the US Navy, being officially redesignated the UH-2 Seasprite. Its versions, known so far as HU2K-1 and HU2K-1U, were renamed UH-2A and UH-2B, respectively.

From the very beginning of its operational service with the US Navy, the Seasprite underwent several modifications and improvements. The biggest – and most significant change in its design – came in 1968, when the helicopter was a subject of major modernisation. First of all, the existing GE turboshaft single engine of the Kaman UH-2 helicopter was replaced by two propulsion units of the same type. As a result, range of the helicopter was extended to 411 nautical miles. In addition, its cruising speed was increased to 130 knots.

Nevertheless, despite all those improvements, the Kaman Aircraft company decided to cease production of the Seasprite helicopter in the late 1960s. It was caused directly by lack of further commercial orders for the UH-2, other than initial purchase by the US Navy.

In October of 1970, the SH-2 helicopter was chosen as platform for the Light Airborne Multi-Purpose System (LAMPS) – the US Navy programme of using rotorcraft to increase the ship anti-submarine awareness beyond the line of sight. And the main advantage of the SH-2 was that, due to its relatively small size, the helicopter could operate from the decks of various ships, not only aircraft carriers.

As a consequence, production of the helicopter resumed in 1971 with the first prototype of a new version, developed for the LAMPS purposes and designated SH-2D, being flown as early as on 16th March of that year.

In 1973, the next version of the helicopter, designated SH-2F, was introduced into operational service with the US Navy. It featured improved engines and increased take-off weight but, most importantly, the rotorcraft was now equipped with a full suite of LAMPS I.

In 1981, an order was placed to deliver further sixty helicopters of the SH-2F version and eventually all but two of the Seasprites operated by the US Navy were upgraded to that new variant.

Since 1987, sixteen SH-2F rotorcraft have been fitted with additional equipment. It included a chin-mounted FLIR (forward-looking infrared) sensor, chaff and flare launchers, twin rear-mounted infrared countermeasure systems, and above all, missile and mine detection devices. On 2nd April 1985, the SH-2G Super Seasprite version was flown. That new variant entered operational service in 1993. Until April of the next year, the G version definitively replaced the earlier models that were then officially withdrawn from active duty.

The SH-2 became the first ASW helicopter of the US Navy, nevertheless that rotorcraft was being used in a number of other tasks. They included anti-surface warfare, anti-ship missile defence, surveillance and targeting, search and rescue, medical evacuation, personnel and cargo transfer, interdicting of small boats, air support of amphibious assault, spotting gun fire, detecting mines, as well as battle damage assessment.

Almost from the very beginning of their service with the US Navy, the SH-2 helicopters participated in combat operations. As early as August of 1964, the Seasprite rotorcraft were engaged in the Tonkin Gulf incident, with the task of recovering downed crews from both water and land.

In 1965, similar duty was assigned to the SH-2s within the well-known Operation Rolling Thunder, being a part of the Vietnam War. Furthermore, the SH-2F helicopters also took part in Operation Earnest Will in July 1987, Operation Praying Mantis in April 1988, as well as Operation Desert Storm in January 1991.

The SH-2F Seasprite remained in active service with the US Navy until 1994. The SH-2G variant was delivered only to the Naval Reserve squadrons and were operated there until 2001.

Apart from the US Navy, the SH-2G Seasprite helicopters were purchased by the Royal Australian Navy, the Egyptian Navy and the Royal New Zealand Navy. In addition, the Peruvian Navy acquired four helicopters of that type from the New Zealand and the Polish Navy received four rotorcraft as a part of combined delivery of two Oliver Hazard Perry-class frigates. Respective non-US variants are marked with additional letter after the type designation – (A) for Australia, (E) for Egypt, (NZ) and (I) for New Zealand and (P) for Poland.

Nevertheless, the Australian contract turned out into a debacle, being six years over the initial schedule and facing several problems with reaching the combat ready status. Finally, all already delivered helicopters were returned to the manufacturer. The four Polish SH-2G were delivered in October of 2002 (‘163544’ and ‘163546’ that arrived aboard of ‘ORP Gen. T. Kościuszko’ frigate) and in August of 2003 (‘3543’ and ‘3545’ flown from Nordholz naval base in Germany). All the helicopters were assigned to the newly formed Maritime Helicopter Group of the 28th Puck Air Squadron (28. Pucka Eskadra Lotnicza) in Babie Doły.

The SH-2Gs of the Polish Navy are intended for reconnaissance, detection and identification of surface targets, ASW and SAR missions, as well as providing logistical support for both OHP-class frigates. Between 2007 and 2008, three of the Polish Super Seasprites were adapted to carry Eurotorp MU90 Impact light torpedoes. They were also fitted with additional on-board armament, namely 7,62 mm PK universal machine guns.

However, it seems that the days of the Kaman SH-2G Super Seasprite in the Polish Navy are already numbered. Official statement regarding their planned withdrawal was already announced in 2018, due to lack of support from the manufacturer. The helicopters will be, most probably, retired from service on the arrival of new AW-101 naval rotorcraft currently being at their final production stage in the UK.

New aviation museum to be created in Poland

Recently, we have learned about the new aviation museum that is going to be opened next year in central Poland. Its first exhibit has already arrived to the location, so we were just waiting for […]