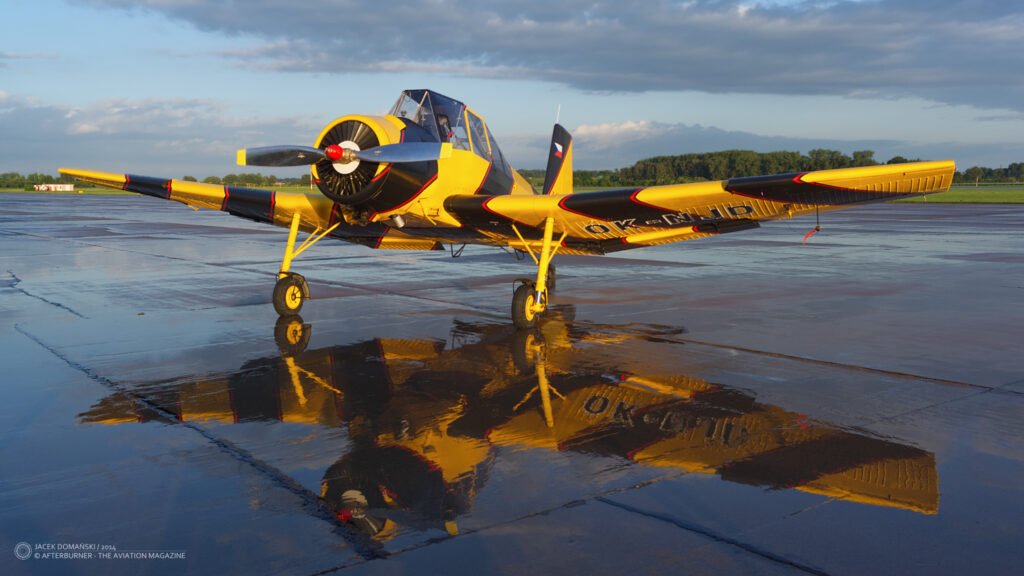 History of crop dusting or, formally speaking, aerial application, in then-Czechoslovakia dates back to year 1926, when two military biplanes Aero A-11 were used in fighting with forest pests. Reportedly, the initial spraying was not successful and needed to be repeated next year. A few more applications occurred also in the 1930s, but all of them were rather single-case actions than the rule.

After the World War II, crop dusting was introduced there on a larger scale. Initially, different aircraft were used from that task, starting from Polikarpov Po-2, through a variety of sport and training aeroplanes to captured post-German Fi 156 ´Storch´. Then, in the mid-1950s, the first factory-fitted cropduster was implemented, Aero L-60 Brigadýr. More than sixty aircraft of the L-60B, as the variant equipped for aerial application was designated, were manufactured and then acquired by Agrolet state-owned company.

Nevertheless, the need for a specialized cropduster was clear and it started a broad discussion about its design, not only in Czechoslovakia, but also in other Eastern Bloc countries. As a consequence, the Council for Mutual Economic Assistance (Comecon) announced a competition for a common standardized cropduster to all Comecon countries. Among main requirements for that aeroplane there were STOL capability, possibility to operate from unpaved runways, exceptional performance at low level flying and good visibility from the cockpit, as well as robust construction and low maintenance requirements.

That challenge was accepted by Let Kunovice and Moravan Otrokovice, two well-known Czechoslovak aviation manufacturers. Their initial idea was to create an aircraft powered by inline engine, but it was shortly changed for a radial one. The choice was Ivchenko AI-14 generating 260 hp but the aircraft was underpowered and finally that engine was replaced by Avia M-462RF – a license-made variant of AI-14, although modified and generating 315 hp. On 29th June 1963, prototype of the new cropduster, designated XZ-37, performed its maiden flight.

The new Czechoslovak agricultural aircraft was a cantilever low-wing monoplane of all-metal construction, featuring fixed undercarriage with a tailwheel and pilot´s cockpit situated just above the engine. Hopper for chemicals was placed behind the cockpit and then there was a seat for a mechanic, with a small side window. It should be mentioned here that there have been speculations that the general design of that aeroplane was copied from Auster B8 Agricola – the British agricultural aircraft from 1955 that never achieved any commercial success. Nevertheless, they were never confirmed nor proved.

In 1965, serial production of Z-37 Čmelák (English: bumblebee), as the aircraft was officially named, was launched. Depending on the manufacturer, the aeroplanes are usually designated Zlín or Let, indicating their origin from Otrokovice or Kunovice, respectively.

The Z-37 was widely used in former Czechoslovakia, as well as sold to many other European countries. Among its main operators there was GDR, Hungary and Bulgaria but some also flew in Yugoslavia, India, Iraq, Austria or Finland. The main, standard version of the aircraft was designated Z-37A, however there were also a few short-run variants made: Z-37A-2 and Z-37T-2 two-seat trainers or Z-37A-C3 four-seat version. In 1981, the prototype of turboprop version performed its maiden flight. That aircraft was then serially produced as Z-37T Agro Turbo and later Z-137T.

However, as it often happens among the Eastern Bloc countries, the initial idea of standardized agricultural aircraft fell flat on its face. Poland and the Soviet Union have not approved the Z-37 and developed their own cropdusters. It led, inter alia, to creation of PZL-Mielec M-18 Dromader, a single engine aeroplane designed on basis of Rockwell S-2R Thrush Commander (more about that aircraft here). The Dromader performed its maiden flight in 1976 and shortly after became so successful that the Comecon ordered to stop further production of the Z-37. Since 1977, Čmelák had to be replaced by the M-18, in terms of the common Eastern Bloc cropduster.

Nevertheless, SlovAir company – main Czechoslovak operator of the Z-37 – has never adopted the M-18 as their standard aircraft. As a consequence, the serial production of Čmelák was re-launched between 1983 and 1984, with approximately 60 aircraft made. The total number of manufactured aircraft, in all variants, exceeded seven hundred.

Nowadays, many Z-37 are still operational and are being used for their main purpose, the aerial application task. A large number also flies in aeroclubs as glider towing aircraft, and some were even adopted for sightseeing purposes.

The pictured Čmelák OK-NJD is one of such examples. The aircraft was initially made as two-seat variant but later additional seats were added. That´s why it is now usually designated as Z-37A-3, although originally there was just one aircraft of that version made – OK-HYA for the State Aviation Authority (and, due to its registration, nicknamed ´Hyena´). The original Z-37A-3 is now a part of aviation collection in Prague-Kbely museum.

A few weeks ago, in our article focused on this year´s air show season, we mentioned the Aviation Fair in Pardubice among the cancelled events. Nevertheless, it appeared not a final decision. Yesterday, on 6th […]