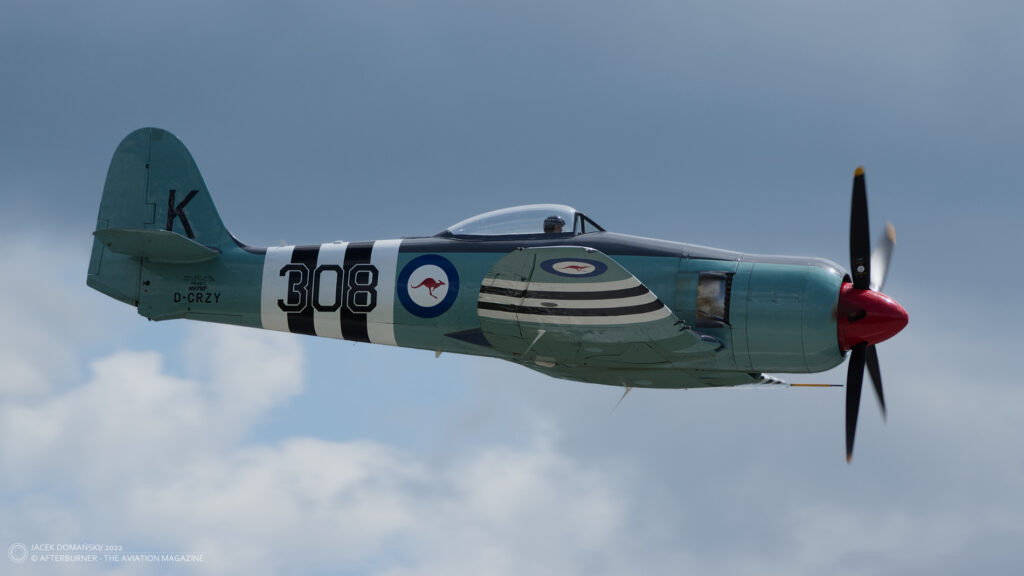 The Korean War is commonly known as the first conflict that seen large-scale jet-versus-jet air battles, with MiG-15 and F-86 Sabre being the iconic aircraft of the era. Nevertheless, it was the war in which propeller-driven aircraft were still used on a wide scale. They were usually a final variants of well-known aeroplanes designed during the World War II, such as P-51 Mustang, F4U Corsair, Yak-9, La-9 and B-29 Superfortress. Consequently, this led to direct combat engagements between newly developed jets and abovementioned conventional aircraft. Surprisingly, it did not necessarily mean that the latter was at a disadvantage.

Hawker Sea Fury, a fighter-bomber being operated in the Korean War by the Commonwealth forces, was one of those mentioned aircraft of the World War II origin. Although introduced for operational service in 1947, the Sea Fury represented a final design from series of heavy fighters developed by Sydney Camm during the war years.

In the 1930s, his aeroplanes were a backbone of the Royal Air Force squadrons. Hawker Fury, Camm´s biplane interceptor from 1931, had even seen some combat in the early stage of the World War II but it was the Hurricane that brought fame to its designer. Then, Sydney Camm focused on heavy interceptor fighters that also had exceptional ground-attack capabilities – Typhoon and Tempest. The Sea Fury was initially designed as lighter variant of the latter, but eventually, faced with the end of war and rapid development of jet aircraft, the RAF had lost interest in the new Camm´s aeroplane.

At the same time, the Royal Navy needed a new, powerful deck fighter. That created an opportunity for further development of ´Light Tempest´, this time as naval aircraft. Finally, on 31st July 1947, the Hawker Sea Fury was officially introduced into service within the Fleet Air Arm. The aeroplane, powered by Bristol Centaurus radial engine, was able to reach top speed of 460 mph (740 kph) and thus became one of the fastest propeller-driven, single reciprocating engine-powered aircraft ever made.

At the outbreak of the Korean War, the Sea Furies were operationally used by the Royal Navy and the Royal Australian Navy. Following establishment of the British Commonwealth Forces Korea that included Australian, British, Canadian, Indian and New Zealand forces, both abovementioned navies have sent their aircraft carriers to the war theatre. And that also meant deployment of the Sea Furies there.

The first Sea Furies appeared in the Korean War in October of 1950. They were assigned to No. 807 Naval Air Squadron and arrived on board of HMS Theseus aircraft carrier. During the war, the British Furies operated from at least three aircraft carriers – the abovementioned HMS Theseus, HMS Glory and HMS Ocean, while the Australian ones flew from HMAS Sydney and HMAS Vengeance.

In Korea, the Sea Furies were commonly used for ground-attack missions targeted on the North Korean logistic system. They also performed air patrol duties, however without any significant successes caused by lack of hostile aircraft. Moreover, the Sea Furies sometimes flew in a role of artillery spotting aeroplanes.

An interesting fact is that all the Commonwealth aircraft were painted with black-and-white identification stripes, already known from the days of the D-Day and Operation Overlord in 1944. That quick identification feature was implemented to avoid friendly fire, because of shooting down a Seafire by a USAF B-29 bomber that occurred during the first days of the war.

Regarding the aerial warfare, the first month of the Korean War were in favour of the United Nations forces. The North Korea entered war with just a handful of propeller-driven aircraft, and they were quickly eliminated. As a result, the aeroplanes flying on behalf of the UN dominated the sky during the initial months of the war. However, that situation quickly changed in October of 1950 – the same month when the Sea Furies arrived to Korea – in consequence of Chinese intervention. China officially entered the war on 25th October and shortly after was additionally, although unofficially, supported by the Soviet Air Force.

The direct result of the abovementioned engagement was that the latest Soviet design, MiG-15 fighter jet, arrived to the theatre. They quickly proved to be effective weapon against any aircraft flying on behalf of the United Nations, not only the propeller-driven aircraft but also the first-generation jets, such as P-80 Shooting Star, F9F Panther and Gloster Meteor. Jet-versus-jet air combats became more and more frequent, especially after arrival of new USAF fighter, F-86 Sabre, in December of 1950.

Without any doubts, the battle for Korean sky became one of the most widely recognized operations of that conflict. Apart from being studied by history enthusiasts, it found a way to popular culture, frequently being an icon of the first clash between the Eastern Bloc and Western countries. Nevertheless, those jet dogfights made only about 10 – 15% of all aviation operations flown during the Korean War. Most of the combat sorties were made against the ground targets and, still, thousands of them were completed by the propeller-driven aircraft. Certainly, that led to combat engagement between jet- and piston-powered aeroplanes.

On 8th August 1952, four FAA Sea Furies of No. 802 NAS took-off from HMS Ocean and headed into the Pyongyang area. The formation was led by Lieutenant Peter ´Hoagy´ Carmichael and other pilots were Carl Haines, Peter Davis and Brian Ellis. Their target for that day were bridges of a North Korean railway supply line.

While flying near Chinnampo (now known as Nampo), the Sea Furies were engaged by a formation of Chinese MiG-15 fighters. Most probably, the Chinese pilots were not experienced enough as they made an unforgivable mistake by entering a dogfight with Furies, thus losing all advantages their jet aircraft had. The clash lasted four to five minutes and, according to the Sea Fury pilots, at least one MiG was shot down with other significantly damaged.

It was, unquestionably, the great day for the Fleet Air Arm. The Sea Furies managed to shoot down the legendary Soviet jet without any loses. Officially, the air victory was credited to Lt. Carmichael and for many years he was considered the first man who shot down the second-generation jet fighter while flying the propeller-driven aircraft. In 1953, he was awarded the Distinguished Service Cross for that action.

Nevertheless, further developments caused that events of 8th August became yet another unsolved mystery of the Korean War.

Firstly, there were some doubts if the Sea Fury formation managed to shoot down another MiG-15. The British pilots claimed they noted two blasts but, following some post-war investigations, it turned out to be no clear evidence of such fact in Chinese documents, mostly because they were of poor quality.

Nevertheless, some time afterwards, another pilot of that Sea Fury formation – Sub-Lieutenant Brian ´Schmoo´ Ellis – raised a claim on crediting him with the victory. In his official statement, Ellis not only pointed he saw his rounds causing significant damage to the MiG-15 but also accused Carmichael for not engaging the Chinese aircraft. According to Ellis, the formation leader shot his rounds at a sandbank on their way back to the carrier and landed with still 90% of his ammunition left. And the FAA has credited the victory to Carmichael just because he was the formation leader.

This claim drew much attention and was widely commented by British naval veterans of the Korean War and the press. Nevertheless, the FAA refused to proceed in any further investigation due to lack of evidence. The case was then examined by some historians in the 1970s and then 2010s. However, still without any convincing conclusions. Not only the question who was the one to shot down the MiG-15 was still left open but also the mystery of the second victory remained unsolved. What was more, even the exact number of Chinese MiG-15s engaged in that combat ranged between four and eight, according to various historians.

Eventually, it remains undisputed that on 8th August 1952, the formation of four Sea Furies from No. 802 NAS, led by Lt. Carmichael, shot down the Chinese MiG-15 jet. And that it was the very first case of that kind.

Although some jet-powered aircraft were shot down by propeller-driven fighters at the final stage of the World War II, they all were the first generation, high subsonic jet aircraft. The MiG-15 represented a new quality of jet aeroplanes and, together with F-86, Dassault Mystère and Hawker Hunter, is often considered as the second-generation jet.

One month later, the first air victory of similar kind was credited to the USAF pilot, Capt. Jesse G. Folmar of the VMA-312. On 10th September 1952, Folmar was engaged by two MiG-15, while flying F-4U-4 Corsair. He managed to shoot down one but then was shot down by the other jet aircraft and fortunately survived.

In addition, it should be mentioned here that B-29 crews were credited with a total of twenty seven MiG-15s shot down during the Korean War. Nevertheless, this number seems to be exaggerated and has no evidence in Chinese and Soviet reports. Currently, the historians tend to reduce this number to just four or six air victories.

Obviously, the propeller-over-jet victories were also claimed by the other side of the conflict. Among the confirmed ones there is an event that occurred on 19th July 1950. On that day, Chinese Yak-9 fighters clashed with the USAF F-80C Shooting Star jets of the 36th Fighter-Bomber Squadron. As a result of that fight, three Yak-9s were shot down but also one of the USAF jets was significantly damaged and crashed one mile west of Taejon. Its pilot, Capt. Howard Elliot Odell was listed as MIA and then presumed dead in 1953.

More than ten years later, in October of 1966, yet during the Vietnam War, a North Vietnamese MiG-17 was shot down by Douglas A-1H Skyraider, flown by Lt. William T. Patton. This event is usually regarded as the last time when a propeller-driven aircraft shot down a fighter jet.

Farewell to ´The King´

On 16th September 2021, an F-15C Eagle assigned to the 493rd Fighter Squadron took-off from RAF Lakenheath station for the last time, heading back to the USA. The aircraft was the last of three ´heritage […]