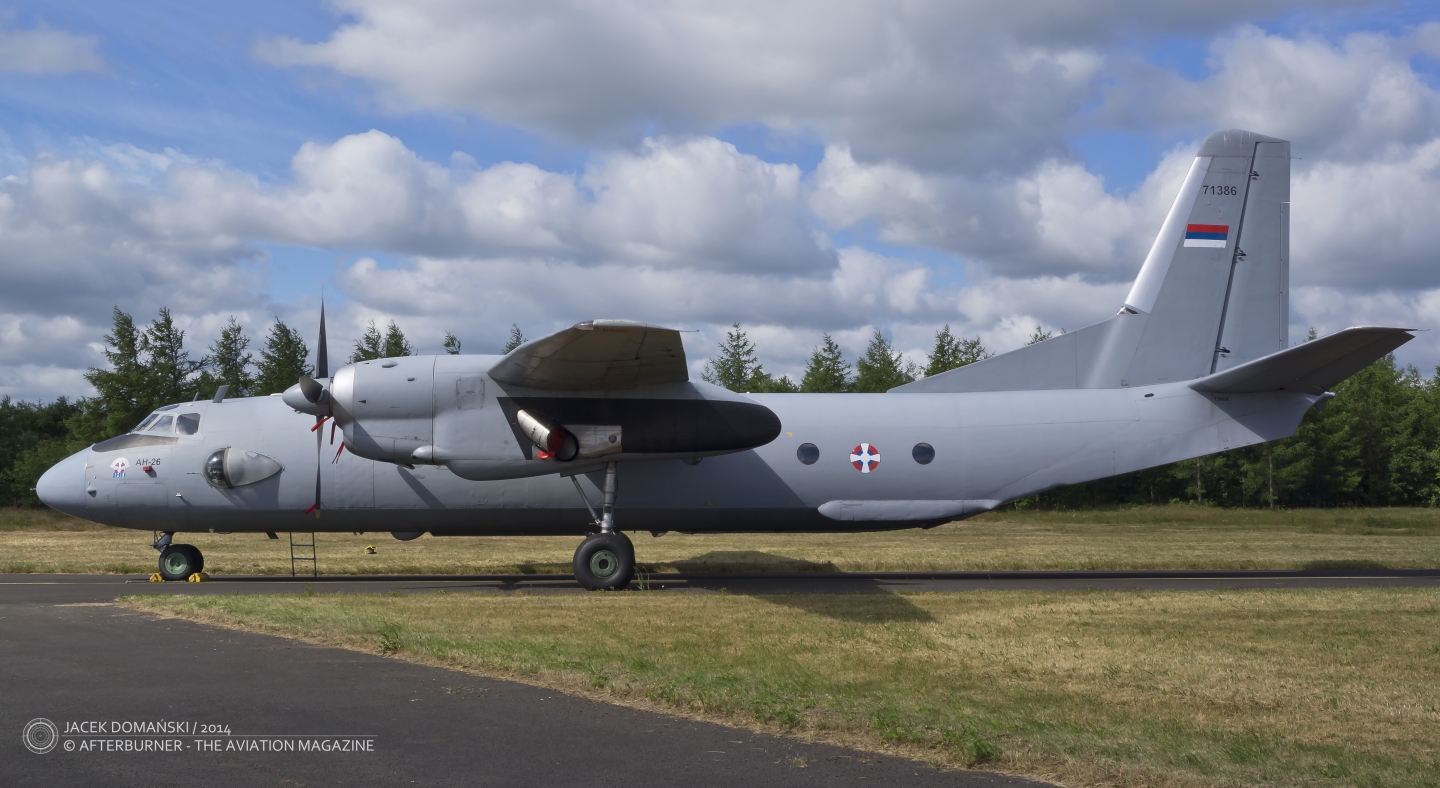 The Serbian Air Force An-26 ´71386´ is probably the most known (and photographed) Serbian military aircraft ever. In the 2000s and early 2010s, this aeroplane visited several air shows in Europe and was exhibited at the static display there – the already mentioned Danish Air Show, ILA 2010, Zeltweg 2013, Kecskemét 2013 and CIAF 2004 being just a few examples.

The former Yugoslav Air Force acquired fourteen An-26s between 1975 and 1976, the new twin-engine, turboprop aircraft was internally designated as T-70 and replaced the C-47 transport aircraft. An additional, the fifteenth An-26, was delivered in 1984 – and this was exactly the ´71386´ from our photo.

In 1992, when the new Federal Republic of Yugoslavia was established, all 15 aircraft were taken over by the air and defence forces of the FRY, but shortly thereafter the transport fleet was significantly reduced. Two An-26s were sold to Congo in 1990s, another three (some sources claim that just one) were destroyed during the NATO intervention in 1999, one An-26 crashed in 2000 and was damaged beyond repair, then next two were sold in 2000s.

Finally, since 2006, the newly re-established Serbian Air Force and Air Defence had six An-26s, but only two of them were in airworthy condition and operationally used –  the pictured ´71386´ and ´71364´, manufactured in 1975. Both aircraft actually proved to be useful and therefore were heavily exploited.

A short while later both aircraft reached the point, they needed a general overhaul and in 2008, after the long discussion, it was approved that at this opportunity, the two operational SAF ´Curls´ would be also modernized. For the other four aircraft, still stored at Batajnica and officially being a part of SAF inventory, neither any overhaul nor modernization were considered.

The overhaul and modernization works were performed by 412th Aviation Plant in Rostov-on-Don, in Russia. As the first one, ´71386´ returned from the plant in July 2008, ´71364´ followed in April 2009. Both An-26s received Garmin satellite navigation system, terrain avoidance and warning system, traffic collision avoidance system, Bendix/King KMD-540 Multifunction Display, and new Bendix/King RDR 2000 digital weather radar. The modernized An-26s were painted all-grey, instead of original camouflage scheme.

Even though the ´71386´ was the youngest aircraft of the Serbian An-26 fleet, nothing lasts forever and its lifespan was over in December 2014. The second aircraft, ´71364´, was expected to fly until the end of 2015. Therefore at the end of 2014 it was more than clear, that both aeroplanes had to be overhauled again or replaced by new aircraft. However, due to lack of funds, the decision was that only one An-26 would be sent to Russia again, for the general overhaul extending its lifespan.

Finally, in 2017, the works were finalized and ´71386´ returned to Serbia, with the expected lifespan extended for ten more years. The second An-26 was grounded at Batajnica, among the other aircraft stored there and was waiting for its final fate.

In the meantime, in March 2018, the Serbian Minister of Defence Alexandar Vulin told the media, that the delivery of two additional An-26s from Russia is expected, as the part of the Russian donation to the Serbian military. However this deal was not finalized, as of today.