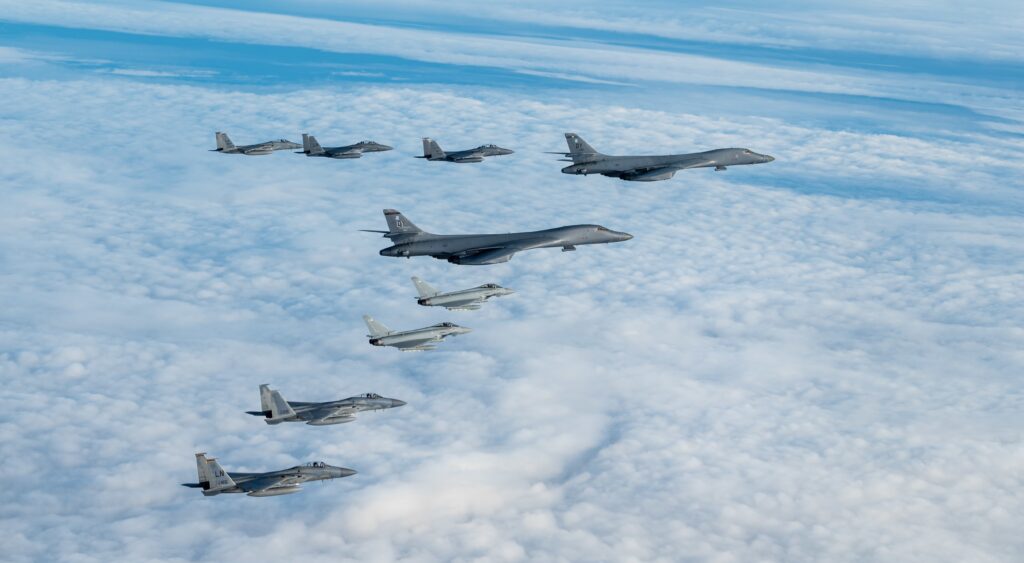 On 10th November 2021, the Bomber Task Force – one of the US commitments to the collective defence of NATO – performed a simulated targeting mission over the North Sea. During that exercise, the UK-based B-1B Lancers were supported by a formation of B-52 Stratofortress bombers from the United States and several other NATO aircraft.

During the first deployment to Europe in March of 2021, the 9th Squadron operated out of Ørland air base in Norway. It was a pioneering mission as, within the framework of training operations, the Lancers of the squadron performed hot-pit and warm-pit refuels at several European airfields. In addition it was also the first time when a B-1B bomber has landed in Poland.

As a part of the current stationing, several long-range training flights are scheduled, covering an area from Arctic to the Horn of Africa. The first of them was the targeting mission performed over the North Sea on 10th November, made in cooperation with the Royal Air Force and the USAF in Europe (USAFE).

A combination of strategic bombers with 4th and 5th generation fighters and other supporting aircraft created a unique task group, able to execute a variety of long-range supersonic and sub-sonic missions. According to official NATO sources, that joint exercise was another proven example of Allies interoperability.

The Bomber Task Force was widely supported by the USAFE command and aeroplanes of the component. Close escort duties were performed by F-15E Strike Eagle and F-15D fighters from the 48th Fighter Wing based at RAF Lakenheath. An air-to-air refuelling support was provided by KC-135 Stratotankers from RAF Mildenhall.

´Bomber Task Force deployments are a great opportunity for us to further increase our interoperability with our U.S. allies,´ said Air Vice Marshal Duguid, Air Officer Commanding 11 Group, RAF, and added: ´These exercises allow us to give our pilots valuable training experience with near-peer capabilities and strengthen our relationships across the NATO alliance. They demonstrate our continued combined commitment to the partnership and the defence of the Euro-Atlantic Area.´

A series of the Bomber Task Force deployments to Europe was launched in 2018, replacing the previous permanent overseas deployment of the USAF bombers. Since that time, the US Strategic Command have brought all three types of USAF strategic bombers to Europe, in order to execute joint training missions with other NATO countries.

The primary objective of those missions is to provide bomber crews an opportunity to familiarize with several different operational theatres and their climatic conditions, to train and implement elements of the Air Force Global Strike Airmen programme, as well as to integrate with NATO partners and regional allies.

According to the Boeing company information released at the beginning of October, the existing fleet of Bell Boeing V-22 Osprey tiltrotor aircraft reached the 500,000 flight hours milestone. The aircraft have been developed since 1981, […]

There is only 274 days to the 2021 edition of the International Aviation and Space Salon MAKS, that will be organized between 20th and 25th July 2021 at Zhukovsky airfield, Moscow area. Last week, the […]