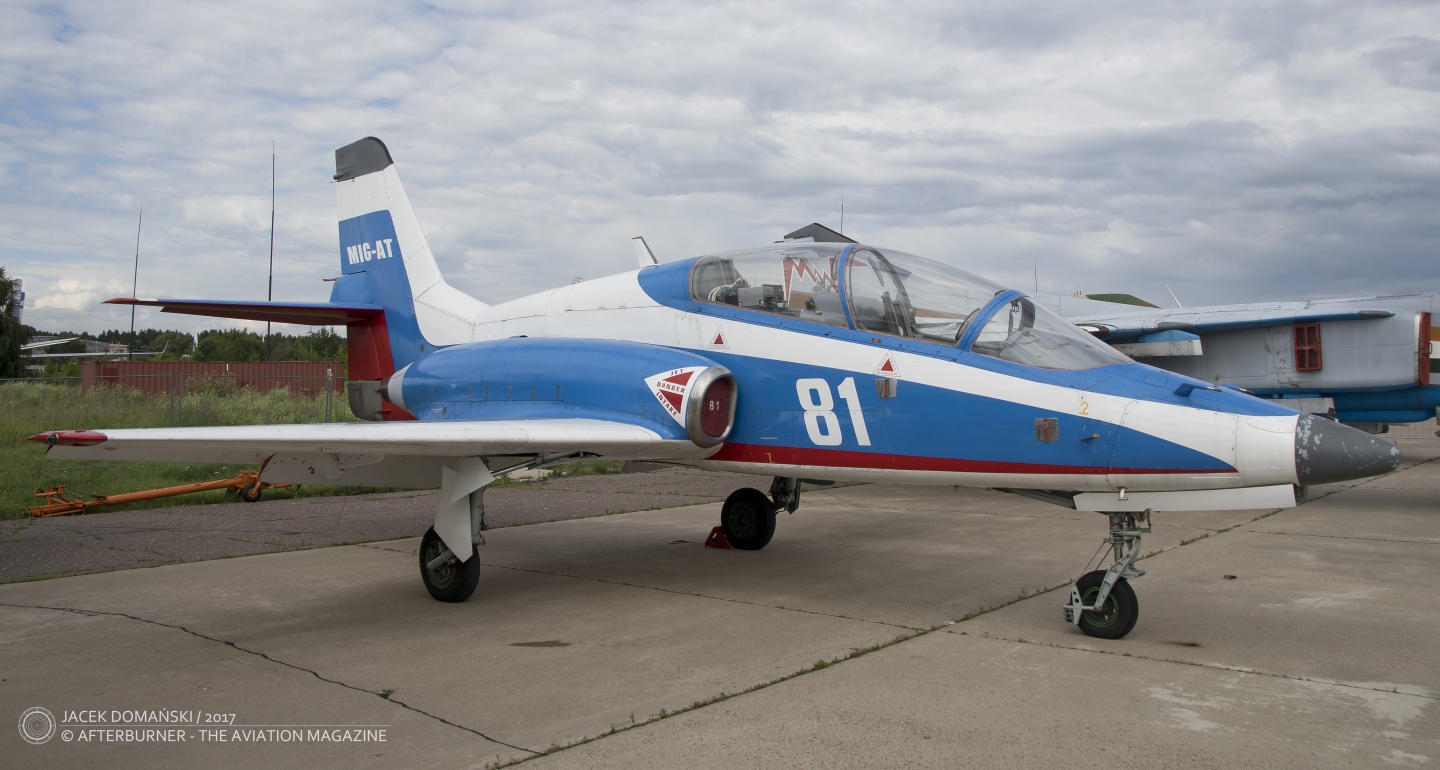 MiG-AT was among the projects proposed within the Soviet competition for a new advanced training aircraft, launched in the late 1980s. The new trainer was intended to replace the existing fleet of Czechoslovak-manufactured aircraft – Aero L-29 ´Delfin´ and L-39 ´Albatros´, which life span was expected to end until 2000s.

The requirements for the new advanced trainer included the possibility to be operated from unpaved airfields, operational overloads from +8 to -3 G, the possibility to re-programme the aircraft flying characteristics and a life span of no less than 10,000 flying hours. In addition, the new training aircraft had to be powered by two jet engines and should be able to evaluate into the combat variant of ground-attack aircraft.

Mikoyan, Sukhoi, Myasishchev and Yakovlev construction bureaux entered that competition. Sukhoi proposed the single-engine supersonic aircraft, resembling a downscaled copy of Su-27; Myasishchev created the training complex called NUTK (НУТК), with the aircraft similar to Alpha Jet design; Mikoyan and Yakovlev entered the competition with their new twin-jet trainers. The results of this contest had to be announced in December 1991.

According to some sources, the project proposed by Myasishchev bureau was the initial winner of the competition, with Mikoyan being the second and Yakovlev´s project taking the third place. Sukhoi trainer, powered by the single jet engine, was not in compliance with the contest requirements and therefore not evaluated.

However, the further discussion about the probable flying characteristics of the proposed trainers continued until 1992 and all three proposals were still considered by the authorities. Unfortunately, due to the collapse of the Soviet Union, in May 1992 the possibility of further government financing for new training aircraft was terminated. This decision forced Myasishchev bureau to withdraw from the project, but Mikoyan and Yakovlev decided to continue their works and searched for international cooperation and financing.

Mikoyan construction bureau managed to establish a cooperation with several French companies – Snecma / Turbomeca, Sextant Avionique, Thomson-CSF and Messier-Bugatti, in the result turning the project 821 trainer into the new aeroplane called MiG-AT. It should be noted that this cooperation is often considered the first ever military cooperation between Russia and Western country, as well as the first joint aircraft development between Russian and Western company.

MiG-AT concept was presented for the general public in 1994, during the Singapore air show and Russian trade fair ´Авиадвигатель-94´ (Aviation engine-94). The first prototype, made with the French engines and the French avionics, was shown in May 1995 and the maiden flight was performed on 21st March 1996, by the test pilot R.P. Taskaev.

The second prototype followed in October 1997, internally designed by MiG as ´823´. This aircraft was later equipped with the fly-by-wire controls, similar to the one used in MiG-29K and MiG 1.44 prototype of the 5th generation trainer. MiG-AT ´823´ with the digital control performed its maiden flight in 1999.

Both prototypes performed more than 600 flights until 2001, being proposed for Russian Air Force and other CIS countries – unfortunately, without any success. In the meantime, the Russian Air Force once again started to look for the new advanced trainer. The new competition was opened in 2002 and, similarly as ten years ago, Yakovlev and Mikoyan companies were fighting each other in the final round. In April 2002 it was announced that Yakovlev was the winner of the competition and Mikoyan´s appeal was denied.

Despite this loss, MiG company was still developing the project, offering the new trainer for the traditional buyers of Soviet and Russian military equipment – India, Malaysia, Algeria, but also for Greece or United Arab Emirates. Visiting the domestic and international air show, extensive marketing campaign pointing the advantages of the new trainer and proving the aircraft is 5-10 years ahead the similar constructions, were not successful. In 2010, without having any potential customers, the project was abandoned.

In the case of other participant in the advanced trainer competition from 1991, the design proposed by Yakovlev construction bureau, the things turned out differently. Yakovlev established the cooperation with Italian company, Alenia Aermacchi, and developed both the training aircraft and its combat variant. And even their ways parted a few years later, Yak-130 (as the new aircraft was designed) won the second competition in 2002 and the serial production started in 2009. Until today, approximately 150 Yak-130 trainers were produced and are operated in Russia, Belarus, Bangladesh, Algeria, Laos and other countries.

However, in November 2018, the RSK MiG company announced that the project of MiG advanced trainer was reactivated, and two new prototypes would be shown shortly. The new aircraft had to be proposed together with the MiG-35 fighter, creating the modern training and combat complex. Although, taking into consideration the latest decision of merging MiG and Sukhoi companies and the lack of customers for MiG-35, financing at this moment the development of another training aircraft by UAC is remotely possible.