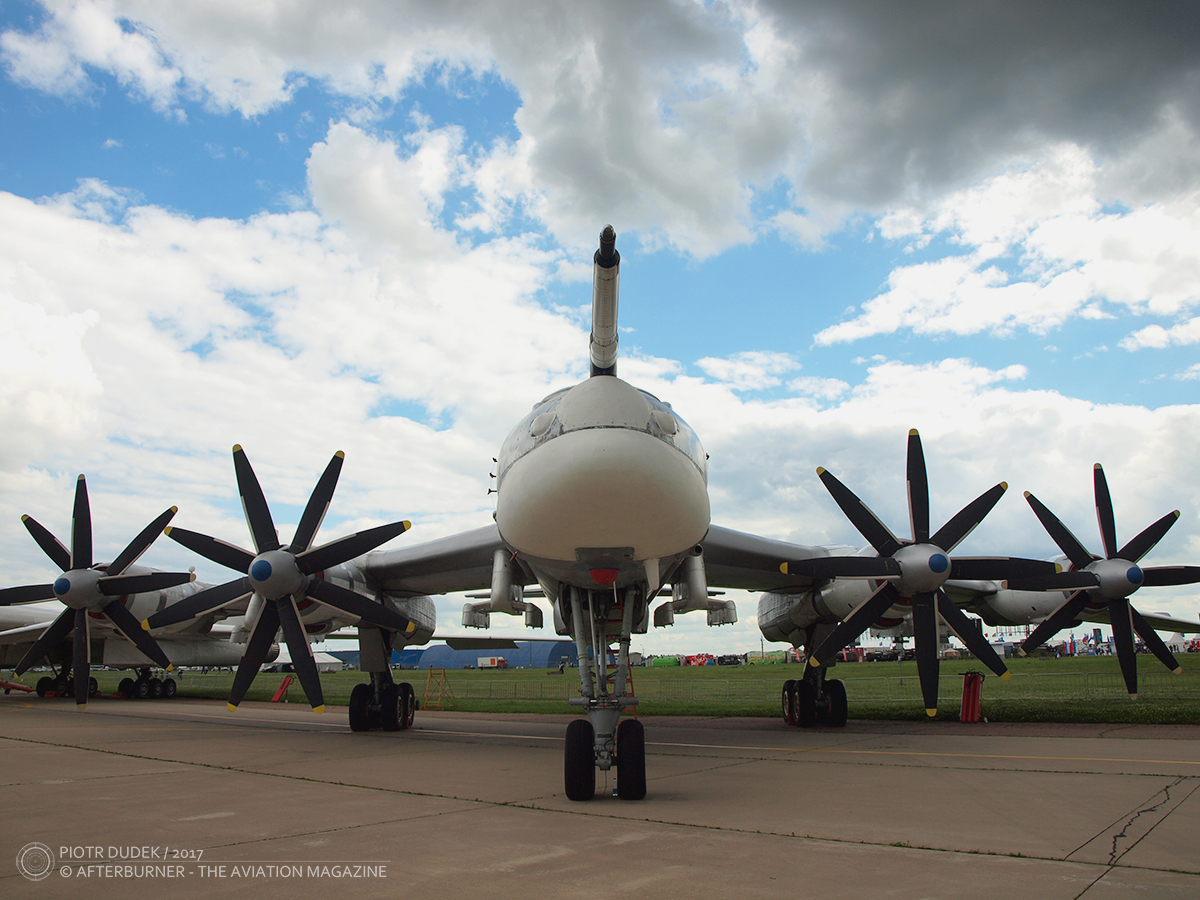 Tupolev Tu-95 strategic bombers (NATO designation: “Bear”) have been true workhorses of the Soviet and later Russian Long Range Aviation being one of the components of the country’s nuclear deterrence system.

First flown in November 1952 (Tu-95/I with two TV-2F engines), Bear became one of the icons of the Cold War era. Propelled by four powerful Kuznetsov NK-12 double turboprops (rated at 15.000 HP), capable of delivering a variety of nuclear weapons (incl. RDS-4 Tatyana fission bomb, RDS-6S and RDS-37 thermonuclear bombs) Bears continued their service as a nuclear deterrent for decades. Simultaneously, other variant of Tu-95 (Tu-95RT) served as maritime surveillance and target acquisition aeroplanes and flew over vast waters of Atlantic and Pacific Oceans.

Throughout the years of the Soviet Union crews manning Tu-95 bombers were considered the elite of the Air Force, as they performed highly complex and top priority missions in most unfavourable conditions, over seas and unwelcoming icy spaces of Arctic.

Upon the fall of the Soviet Union, the fleet of Tu-95 bombers, just as the remaining components of VVS fell victim to drastic financial cuts, which led, i.a. to withholding constant nuclear patrols in 1992. After the Soviet Union broke into independent states, a significant number of Bears belonging to 79th Heavy Bomber Aviation Division were stationed at Dolon Air Base near Semipalatinsk in Kazakhstan. Between 1992 and 1994 all of them were returned to Russia and deployed to Ukrainka Air Base (Amur Oblast), where they joined other bombers.

Ukraine inherited 23 Tu-95MS bombers, but as early as in 1998, as a result of Nunn-Lugar Cooperative Threat Reduction, began to scrap 19 of them. One remained in Ukraine as a museum exhibit, while three remaining aircraft were returned to Russia, along with 581 Kh-55 cruise missiles in exchange for natural gas debt relief.

All Bears remaining in active service belong to Tu-95MS variant (apart from Tu-142 maritime patrol and ASW aeroplanes – in service with Russian Naval Aviation), which is capable to deploy Russian Kh-55 and Kh-101/102 cruise missiles.

In 2007, after almost 15 years Bears have resumed their constant patrols over the Oceans and North Pole.

Although in service for more than six decades it was as late as in 2015 when Tu-95MS bombers saw their combat debut over Syria. On November 17, 2015 Tu-95MS bombers, along with Tu-22M3 and Tu-160 bombers attacked several positions of so called Islamic State. Bears launched several Kh-555 (Kh-55 version with conventional warhead) cruise missiles.

The Russian turboprops repeated their attacks conducted from Engels Air Base throughout 2016 and 2017. The mission of June 5, 2017 saw Bears destroying several depots and CP of the ISIL with Kh-101 stealth cruise missiles.

Although the design of Tu-95 is almost 70 years old the aeroplane remains to be a reliable and capable strategic bomber with both nuclear and conventional deployment capacity. Modernised versions of Tu-95 (which is dubbed the fastest turboprop in the world) will remain in service for the years to come.

The very Tu-95MS “Saratov” (tactical no. Red 10, registration RF94128) is the first bomber of this type to be modernised in order to carry and deploy Kh-101/102 missiles. It belongs to the 184th Guards Heavy Bomber Regiment (full name: 184th Guards Poltavsko-Berlinskiy Red Banner Heavy Bombardment Regiment) and is stationed in Engels-2 Air Base in Saratov Oblast.