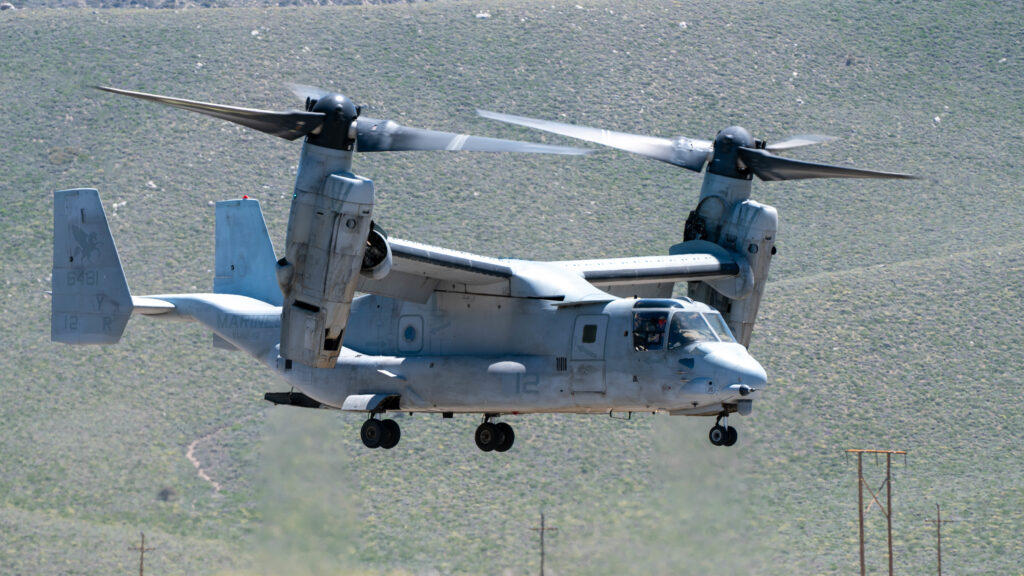 At the end of May, the Marine Medium Tiltrotor Squadron 161 (VMM-161) performed a series of live-fly trainings at the Mountain Warfare Center in Bridgeport, California. The exercise included logistic support mission and high-altitude flights with landing and take-off operations.

The Marine Medium Tiltrotor Squadron 161, commonly known as the ´Greyhawks´, was formed in California on 15th January 1951, as Marine Helicopter Transport Squadron 161 (HMR-161). As it was the first tactical helicopter squadron within the US Marine Corps. Initially, the HMR-161 operated Sikorsky HRS-1 helicopters and opened its combat record in the Korean War, yet in August of 1951.

Starting with May 1960, the squadron received new Sikorsky H-34 helicopters and then in 1962 the unit was renamed to Helicopter Marine Medium 161 (HMM-161). In 1966, the H-34 rotorcraft were succeeded by Boeing Vertol CH-46 ´Sea King´ helicopters.

Following its initial deployment to Korea, the HMM-161 took part in many combat operations all over the world. They included the Vietnam War (1965-1970), Desert Shield and Desert Storm (Iraq, 1991), United Shield (Somalia, 1995), Southern Watch (Iraq, 1997), Determined Response (Yemen, 2000), Iraqi Freedom (Iraq, 2003-2008). The squadron was also involved in some humanitarian missions and other operations, such as cleaning up an oil spill from Exxon Valdez tanker in 1989.

On 14th April 2009, the HMM-161 was transferred to MCAS Miramar air base and began its transition into the first Marine Medium Tiltrotor Squadron on the West Coast, receiving the MV-22 Osprey aircraft and being redesignated as the VMM-161. The squadron achieved ´combat ready´ status in April of 2011 and in July of 2012 was deployed to Afghanistan. There, during Operation Enduring Freedom, the VMM-161 tiltrotor aircraft clocked more than 2,200 flight hours in approximately 100 combat missions.

The Mountain Warfare Training Center (MWTC) is a USMC training ground located in Pickel Meadows, California. The base facilities are located at an altitudes of more than 2,000 metres above sea level, while the highest peaks within the area exceed 4,000 metres. The MWTC allows the Marines to exercise for operations in mountainous, high-altitude and cold weather environments.

The 1007th Expeditionary Airfield is among the MWTC facilities. The air base is VTOL-capable and allows the USMC aviation squadrons to train flight operations in high-altitude locations and severe weather conditions.

On 9th June 2022, the current edition of joint exercise Red Flag – Alaska was officially launched at the Joint Pacific Alaska Range Complex. The training, organized on regular basis since 1992, is a large-scale […]