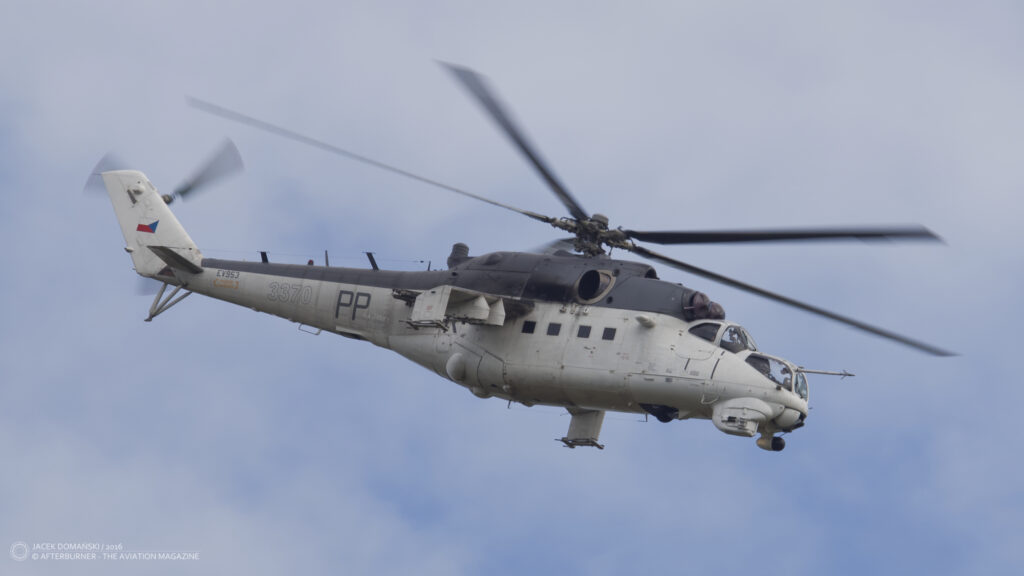 The 221st Squadron was officially formed in 2008, as a result of reform of the Czech Air Force, by re-naming the 231st Helicopter Squadron at its transfer from Přerov air base to new home location in Náměšť nad Oslavou. In addition, the unit continues tradition of the former 331st Helicopter Squadron, established in Přerov back in 1995.

Since its formation, the 221st Squadron is operating Mi-24V (NATO reporting name Hind) attack helicopters, being the only unit of the Czech Air Force equipped with that type of aircraft. All Hinds from the Squadron inventory were delivered in 2003 and then between 2005-2006, as a part of repayment of the Russian debt against the Czech Republic. These rotorcraft are also sometimes designated as Mi-35, although it should be noted that it means only an alternative, export designation of Mi-24V and must not be confused with upgraded variant of that helicopter, known as Mi-35M.

On 1st December 2013, the 221st Squadron was assigned to the 22nd Helicopter Base, formed in Náměšť. Within the new structure of the Czech Air Force, the 22nd Base became a home for two rotorcraft squadrons, the 221st and also the 222nd Helicopter Squadron, the latter being equipped with Mi-171Sh rotorcraft.

From the very beginning the 221st Squadron actively participated in the NATO training and missions. Among them, there were also Tiger Meet exercises (NTM).

The Tiger tradition in Přerov dates back to the days of the 1st Squadron of the 51st Helicopter Regiment. Following the restructuration of the Czech Air Force, its heritage was continued by the 331st, then 231st, and finally 221st Squadrons. Reaching the status of the NATO Tiger full member by 2022, was the crowning achievement of that custom. Obviously, it did not happen immediately, as the unit was applying to the Tiger Association from 1992.

An interesting fact is that, to emphasize its ´tiger spirit´, in 2021 the Squadron has adopted a Sumatran tiger, living in a local zoological garden.

It should be noted that, since the very beginning, the 221st Squadron belongs to one of the most active, and most recognizable, units of the Association. It started already in 2002, during the meeting organized in Beja, Portugal. There, the Squadron for the first time participated in the exercise with full member status and right away won the Silver Tiger Trophy.

Another reason for its popularity are the amazing ´tiger liveries´ made for each particular edition of the NTM. The 221st Squadron had impressed many times both the Association and aviation enthusiasts with great designs of their special liveries that were also three times awarded with the Best Painted Aircraft Trophy – in 2004, 2005 and 2016.

The winning livery from 2004 pictured a tiger tearing the helicopter from inside with its claws. Then, in 2005, there was the ´Night Tiger´, followed by the unforgettable ´Alien Tiger´ in 2016. Especially the latter design has aroused a great interest and became an icon of the Czech Air Force helicopters, as well as the NATO Tiger Association.

Nevertheless, the Squadron had several other interesting liveries made for other NTMs. In 2011, another angry tiger was once again tearing the fuselage of the Czech Mi-24V. In 2015, the white-painted helicopter was honouring the Czechoslovak pilots in the RAF during the World War II – by recalling camouflage of B-24 Liberator GR.Mk.IV, PP-K, nicknamed ´Kosťa´.

In 2021, another commemorative livery was made, honouring the 80th anniversary of No. 311 (Czechoslovak) Squadron RAF. Therefore, Vickers Wellington and Consolidated B-24 Liberator, two aircraft operated by that Squadron were painted on one of the Squadron´s Mi-24V, together with 247 stars on the night sky, showing the number of No. 311 Squadron crewmembers that were killed in action. Certainly, there were also some tiger-related elements included in that livery. Regrettably, due to coronavirus restrictions, the NTM 2021 was cancelled.

Nevertheless, it seems that the special livery made for the NTM 2021 was the last one the Squadron presented on their Mi-24V helicopters. Starting from 2023, the unit will be re-equipped by newly purchased UH-1 Venom / AH-1Z Viper rotorcraft and therefore process of withdrawing all Hinds from active service is now at full swing.