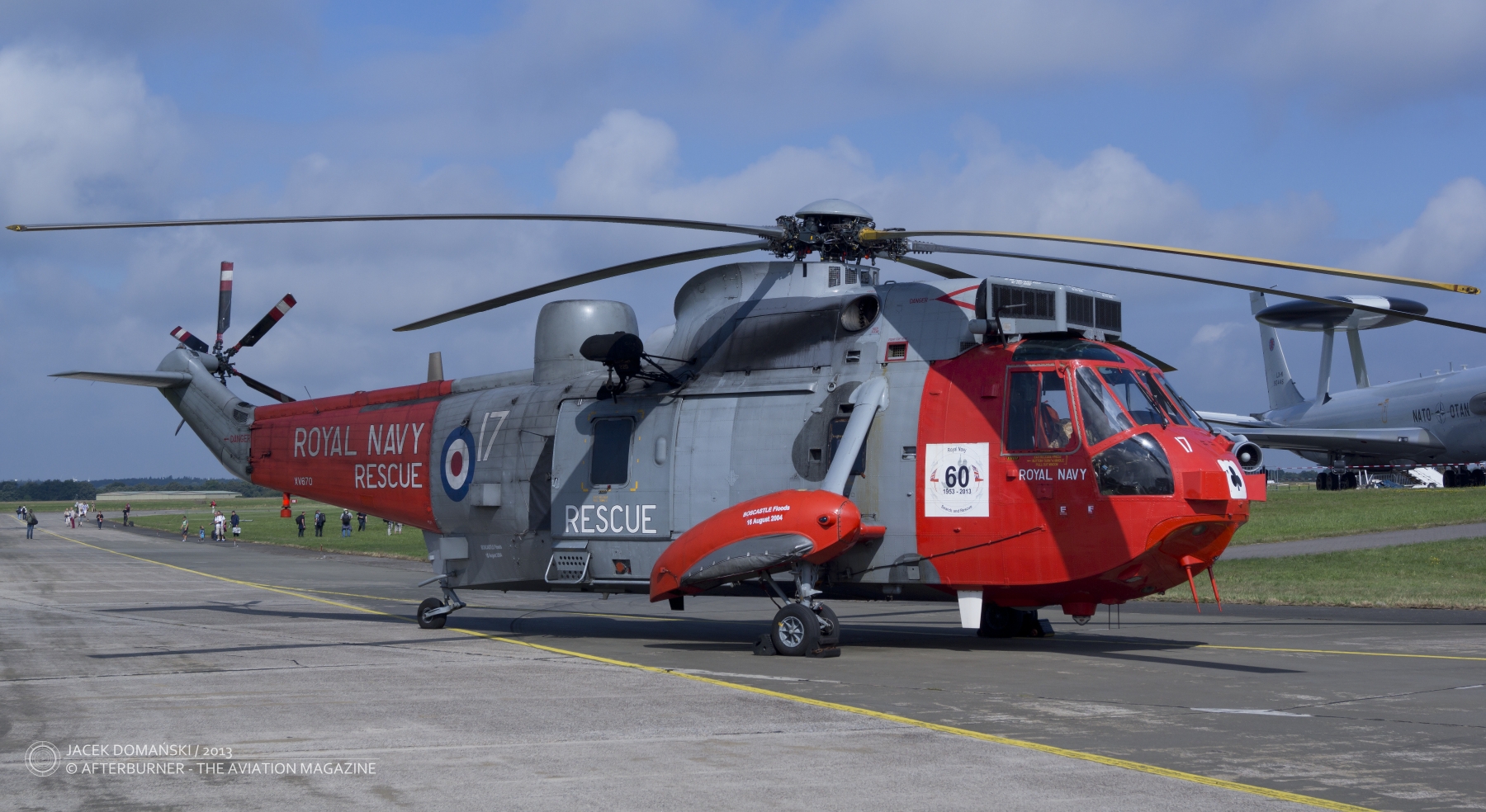 Westland WS-61 Sea King is a medium-lift transport and utility helicopter, that was manufactured in the Great Britain between 1969 and 1995, under a licence from Sikorsky company. Most of the British-made Sea Kings were designed as a naval helicopter and able to perform anti-submarine missions. However, there was also a variant designed for the troop transport, called the Commando.

One of the important tasks performed by the Sea Kings in British service were SAR and CSAR missions – Royal Navy Search and Rescue (grey and red livery, as pictured) and RAF Search and Rescue Force (all-yellow livery). The SAR variants of Sea King were also ordered and operated by Belgium, Germany, Norway and India.

The Sea Kings designed for the RAF search and rescue service were manufactured in a dedicated HAR.3 (later HAR.3A) variant. The Royal Navy Fleet Air Arm (FAA) primarily used their Wessex helicopters for SAR missions, but with the introduction of Sea King, the latter – despite being equipped as anti-submarine rotorcraft – began to be called upon for more distant flights as provided greater range and endurance. Shortly, pairing both Wessex and Sea King for SAR duties became a common practice and led to create the HAR.5 specialized search and rescue variant for FAA.

HAR.5 (sometimes also called Sea King Mk.5) was introduced in 1988, as a result of conversion of HAS.5 anti-submarine warfare helicopter into the SAR aircraft. The combat equipment was removed, except for the Sea Searcher radar. A bit later, even more surplus HAS.5 rotorcraft were converted to SAR variant and designated HU.5. Those SAR Sea Kings were operated by the 771st Naval Air Squadron and HMS Gannet SAR Flight (a FAA detachment in Scotland).

In 2013, the British privatised the search and rescue service by signing a contract with Bristow Helicopters Ltd (operating AW189 and S-92 helicopters). The FAA helicopters were successively retired since 2015 with the last Sea King in the Royal Navy service being withdrawn on 26th September 2018.

The pictured Sea King HU.5 was manufactured in 1970 as HAS.1 variant and served with the 737th and 706th NAS. In 1979 this rotorcraft participated in the famous Fastnet Race rescue – a tragic event caused by the heavy storm during the Admiral´s Cup competition and later called as ´ the largest ever rescue operation in peace-time´ with approximately 4,000 rescue personnel involved.

While photographed at the Nordholz air base, the VX670 was operated by the 771st NAS and was carrying the unofficial Ace of Clubs squadron logo. The Sea King is also marked with the Royal Navy SAR 60 plaque, related to the official celebration of the helicopter search and rescue 60th anniversary in 2013. Another remarkable sign was placed on sponsons and rear hull – it reminds the Boscastle Flood, a disaster from 2004. The 771st NAS was one of the three Sea King squadrons that participated in the rescue actions at Boscastle.

The Sea King VX670 performed its final flight on 16th March 2016, according to web sources, the helicopter was stored and still reported in 2019 (although partially dismantled).