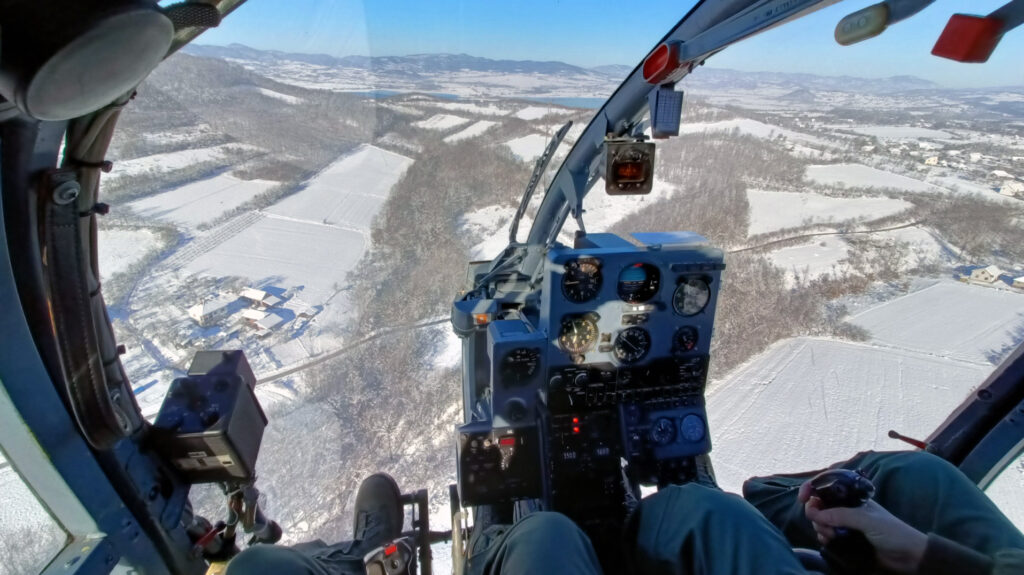 Within the framework of regular winter exercises, flying and ground crews are trained in proper implementing and executing of their operational procedures in low temperatures and difficult weather conditions. Improving the competence of personnel is a primary objective of such training, to assure that all tasks – from aircraft maintenance to combat missions – are being professionally and efficiently performed in each season of the year.

Course for the flying crews includes pre-flight preparations, flying in formation and combat elements, as well as some aerobatic practice. Flights are being executed in conditions of reduced visibility, with fog and snow curtains made by landing rotorcraft. In addition, performing regular combat tasks is usually hampered by snow-covered terrain, with absence of most of its expected landmarks.

The 714th Squadron, nicknamed Сенке (English: shadows), is a specialized rotorcraft unit, equipped with Mi-35 attack and SOKO ´Gama´ anti-tank helicopters (the latter being a license manufactured variant of Aérospatiale Gazelle). Close air support for the army forces and destroying armoured targets on the ground are among the main operational tasks of that unit.

The squadron is a part of the 98th Air Brigade (98. Bаздухопловна бригада), a joint tactical unit of the Serbian Air Force, stationing at Kraljevo/Lađevci (´Morava´ air force base) and Niš airfields. Two other squadrons forming the 98th Brigade are the 241st Fighter-Bomber Squadron and 119th Mixed Helicopter Squadron.

More information about the Serbian Air Force and Air Defence, its equipment and modernization programme can be found under the following links: modernization / helicopters / fighter aircraft / UCAVs.

A farewell to legendary fighter aircraft