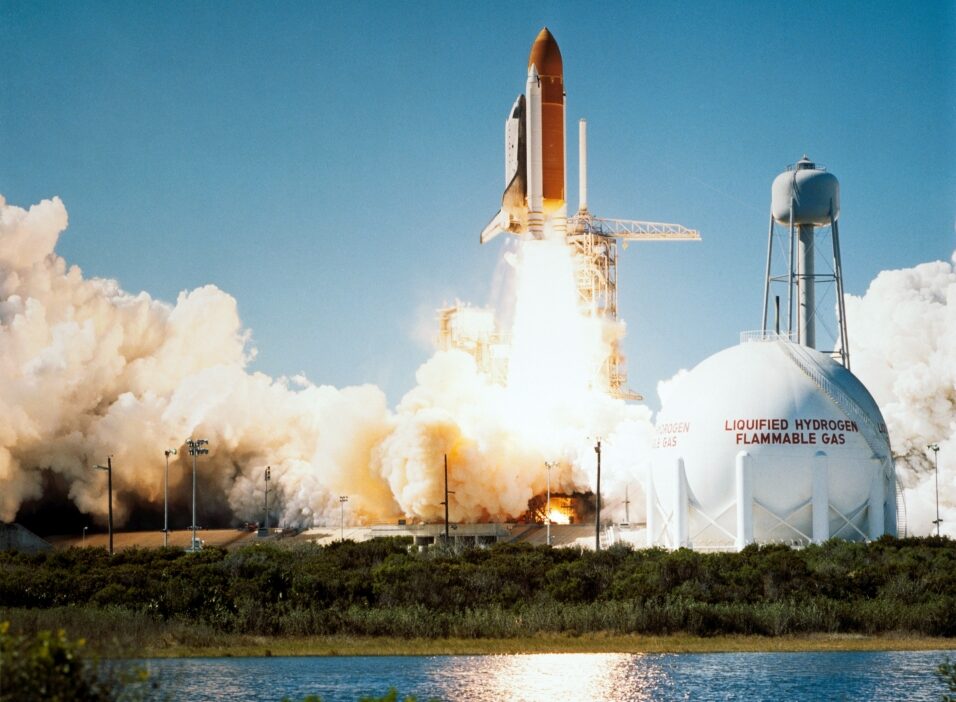 STS-51-L was the 25th mission within the US Space Shuttle programme and, at the same time, had to be the tenth flight for the space shuttle Challenger.

The main objective of the STS-51-L mission, planned for seven days overall, was to deploy  the second Tracking Data Relay Satellite-B (TDRS-B) communication satellite on the Earth’s orbit. The second objective was to carry out experiments by the crew, within the Comet Halley Active Monitoring Program (CHAMP) and including the first use of the Shuttle Pointed Autonomous Research Tool for Astronomy (SPARTAN-203) – a small NASA satellite, deployed and retrieved by a space shuttle and intended for observing the Halley’s Comet.

In addition, S. Christa McAuliffe, as the first ever teacher in space, was assigned the task of hold  several lectures  – both recorded and broadcasted live from aboard the shuttle. Moreover, Gregory B. Jarvis had to perform some fluid dynamics experiments in microgravity.

From the very beginning, the STS-51-L mission was beset by some issues that caused the launch of the space shuttle Challenger being rescheduled several times for both weather and technical reasons. The lift off of the orbiter from Launch Complex 39B of Kennedy Space Center in Florida was originally scheduled for 22nd January 1986, at 3:43 p.m. EST. However, due to delays on another NASA space shuttle mission – STS-61-C – the launch of the Challenger was postponed to 23rd, 24th and then to 25th of January.

However, on that day there were bad weather conditions at the Transoceanic Abort Landing (TAL) site in Dakar, Senegal. Therefore, Casablanca was chosen as an alternative TAL site, but was not suitable for night-time landings. Eventually, the start of the shuttle was postponed until the morning hours of the following day.

Next, and again because of the bad weather conditions – this time in the launch area – the STS-51-L mission was rescheduled one more time, for 27th January, at 9.37 a.m. EST. And then, it had to be postponed for another 24 hours. This time, the reason was a problem with the ground servicing equipment hatch closing fixture that could not be removed from the hatch of the orbiter.

The abovementioned issue was solved, but in the meantime winds in the area of the Kennedy Space Center began to increase, exceeding return-to-launch-site limits. As a result, the mission was again delayed by another day but not without additional issues. On 28th January, during refuelling of the launch vehicle with liquid hydrogen, a hardware interface module in the launch processing system responsible for monitoring the fire detection system failed and resulted in the last delay of the  lift off for another two hours.

A special commission to investigate the disaster was formed, led by William P. Rogers, a former United States Attorney General and United States Secretary of State. Among members of the so-called Rogers Commission, there were astronauts Neil Armstrong (the first man to step on the Moon) and Sally K. Ride (the first American woman astronaut, who previously flew into space twice aboard the Challenger space shuttle).

After detailed analysis of the data, telemetry and recordings from the launch and flight, as well as conclusions from previous reported failures of the US space shuttles, the Commission determined that the direct cause of the disaster was an excessive erosive damage of the main and back-up O-ring seals in starboard solid rocket booster (SRB) of the Challenger. The flame escaping from the SRB, due to abovementioned failure of the seals, led directly to the damage of one of the two aft booster mounting struts. This, in turn, caused its loosening and eventually, the SRB struck the launch vehicle external tank damaging its wall. As a result, the released propellants ignited explosively.

Additionally, the Commission stated that the launch of the STS-51-L was decided to go ahead despite a predicted ambient air temperature of 27 °F (-3 °C). However, the Solid Rocket Boosters, like several other main components of the space shuttle launch vehicle, were certified for use only at temperatures above 39 °F (+4 °C).

Just over a month after the tragic event, on 7th March 1986, divers from the USS Preserver rescue and salvage ship managed to find the crew cabin of the Challenger, lying at the bottom of the ocean. Although the official investigation did not directly determine the cause of death of the astronauts, examination of the found cabin shed some light on the fate of the crew.

It has emerged that three of the four Personal Egress Air Packs (PEAP) recovered from the remains of the space shuttle were activated manually. This could have been done in an emergency situation, for example in case of cabin decompression. However, given the circumstances of the catastrophe and the fact that PEAPs were not designed to provide a pressurised air flow, their use by the crew – even if they survived explosion of the vehicle – would ultimately still end with the astronauts losing consciousness in the next few seconds.

In the aftermath of that tragic event, all space shuttle operations within the NASA Space Transportation System programme were suspended for 32 months. The Rogers Commission’s report led primarily to re-designing the solid rocket boosters of the space shuttle and establishing a new Office of Safety, Reliability and Quality Assurance, tasked to improve the safety of space shuttle operations.

The first space shuttle to fly into space after their operations were resumed was orbiter Discovery. It launched from the Kennedy Space Center on 29th September 1988 and returned to Earth four days later, on 3rd October.

Palomares incident. 54 years ago, a Boeing B-52G Stratofortress, carrying four B28 nuclear bombs, took-off from Seymour Johnson air base in North Carolina for the scheduled flight to the Soviet Union border and back, being […]

The United States Air Force became the fully independent branch of the US armed forces. For the first time, an aviation unit within the United States Army was established on 1st August 1907, named the […]