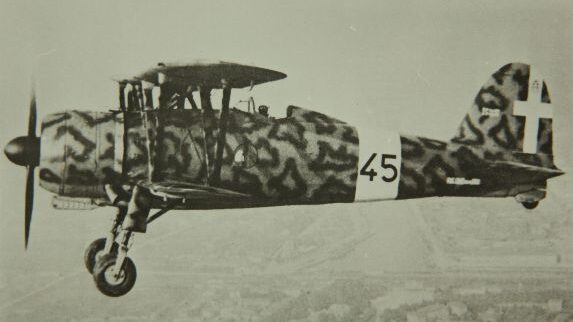 Mario Visintini was born on 26th April 1913, in Parenzo d´Istria, now known as Poreč in Croatia. His real name was Visentin – an old, traditional Venetian surname, later being italianized into Visintini.

We do not know a lot about his youth and how he developed his passion for aviation. Nevertheless, after graduating from high school, Visintini tried to continue his education at Regia Accademia Aeronautica (Royal Flying Academy) but was rejected due to his health condition. Proclaimed too fragile for aviation, Visintini went to University of Bologna and there began his agricultural studies, following the footsteps of his father.

However, he did not abandon the aviation dream. In 1936, Visintini joined the course for civil pilots and shortly thereafter received his pilot´s licence. This allowed him to join the Italian Air Force (Regia Aeronautica) as a complementary student pilot. It was not surprising that Visintini used the mentioned opportunity and qualified as a military pilot in December of the same year. Shortly thereafter, he was appointed sottotenente (second lieutenant) and assigned to the 91ª Squadriglia (91st Squadron) of 4° Stormo (4th Wing) at Gorizia.

At the same time when Visintini was gaining his first aviation experiences, the Spanish Civil War broke out. Italian authorities made a decision to support the Nationalists with military aid, including deployment an aviation contingent to Spain.

In November of 1937, Visintini volunteered to join Aviazione Legionaria, the Italian expeditionary aviation corps in Spain. He was approved and assigned to 25ª Squadriglia of XVI° Gruppo ´La Cucaracha´, equipped with Fiat CR.32 fighters.

During his deployment in Spain, Visintini flown 330 hours and actively participated in combat. He claimed two aerial victories – one over Polikarpov I-15 and another over I-16 – achieved in August and September of 1938, respectively. In addition, Visintini´s commanders and fellow pilots considered him as an outstanding and professional pilot, as well as charming and friendly person.

In October of 1938 (November of 1939, according to some sources), Visintini returned to Italy. He was awarded a Silver Medal for military valour, allowed to become a regular military pilot and, in January of 1940, promoted to lieutenant.

In Italy, Visintini was again assigned to the 4th Wing. He increased his aviation experiences by flying Caproni Ca.133 transport aircraft and Savoia-Marchetti S.M.79, three-engine bomber. Nevertheless, it seemed that agile and high-manoeuvrable Fiat CR.42 ´Falco´ (English: falcon) – a single seat biplane fighter introduced into service in 1939 – became his favourite aircraft at that time.

On 5th April 1940, Visintini was transferred to 413ª Squadriglia and shortly after to 412ª Squadriglia, fighter units operating in the Italian East Africa, region of Eritrea. On 14th June (or 12th June, according to some sources) of the same year, just four days after Italy joined the World War II, Visintini claimed his first aerial victory in that conflict. The aircraft shot down by the Italian pilot was Vickers Wellesley bomber from No. 223 Squadron that made it to the home base but crashed at landing.

During less than a year, Visintini had shot down over twenty aircraft. Regrettably, the exact number is not known due to lost of official records of the 412th Squadron. However, it is certain that the list of his aerial victories includes at least five Blenheim bombers, three Gladiator biplane fighters, one Hurricane, as well as not specified number of Wellesley bombers. Some sources indicate that he was engaged in more than fifty aerial combats and most of them ended up with shooting down the enemy aircraft. Visintini has also destroyed more than thirty enemy aircraft on ground.

Nevertheles, even the aerial victories that could be traced and confirmed allow to consider Visintini not only the top biplane ace of the Second World War, but also the top scoring pilot of all belligerent forces involved at the East African theatre of operations.

On 16th January 1941, Visintini was promoted to captain and appointed commander of the 412th Squadron. Next month, on 11th February, he claimed his last aerial victory, shooting down a Hurricane fighter near Keren.

Later the same day, he took-off again – but this time to search for his wingman, Luigi Baron, who outlanded on his way back to the base, forced to do so by extremely bad weather. Flying through the storm, with almost no visibility, Visintini crashed his ´Falco´ into Mount Bizen and was killed at the spot.