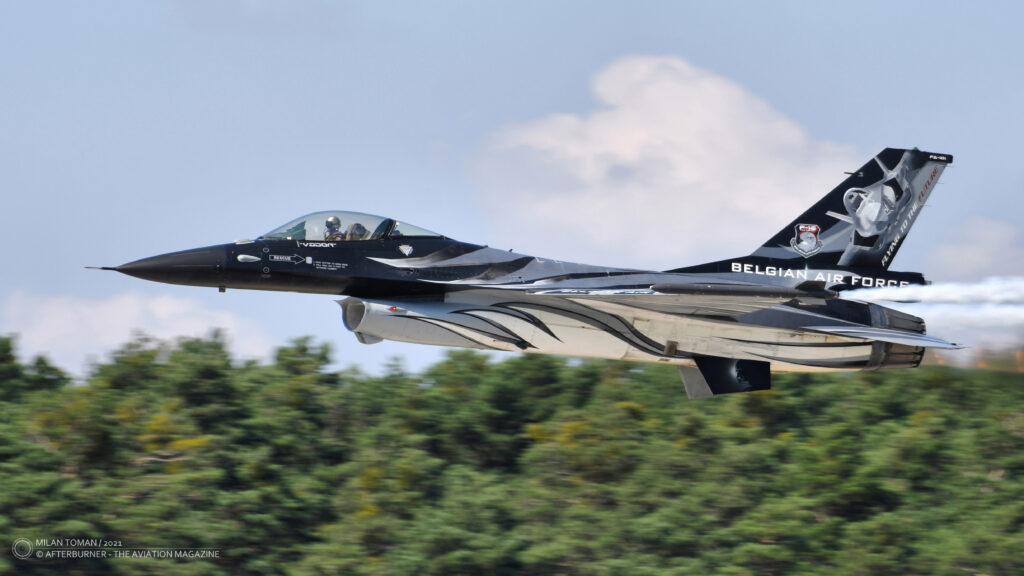 Slovak International Air Fest was one of the few traditional air shows that were held last year, despite the pandemic restrictions. After a one-year break, the event had returned with a set of interesting displays, controversy related to some protective measures, as well as with new location.

The Slovak International Air Fest (SIAF) is the biggest Slovak aviation event, organized annually since 2011. Since the very beginning, through the years, that event was held at Sliač airfield, in central Slovakia. However, modernization works, that are currently being carried out there, forced a change of that traditional venue. As a consequence, the 2021 edition of the SIAF was organized at Malacky-Kuchyňa, in western part of the country.

Although both Sliač and Kuchyňa are active bases of the Slovak Air Force, the SIAF air show is a commercial event, organized by Slovenská letecká agentúra, s. r. o., in cooperation with the Slovak armed forces and government law enforcement agencies.

The SIAF has an indirect correspondence with the former Slovak aviation events. For the first time, the international air show known as CSIAF 92, was held in Bratislava, in 1992. And then, as it was yet before the dissolution of Czechoslovakia; therefore the abovementioned event was organized by Czechoslovak armed forces.

Nevertheless, when Slovakia became an independent state, its military authorities decided to continue the tradition of national aviation event, organized by the armed forces. The first edition of Slovak International Air Display (SIAD) was held in 1994, under the auspices of the Ministry of Defence. The next edition was run in 1995 and then organized in 1996, 1997, 1999, 2002 and 2004. An interesting fact is, that the event was held in Bratislava (except its 1996 edition that took place in Košice), at the biggest commercial airport in the country. And that also caused some issues with organization and coordination of flying displays with constantly increasing commercial traffic.

However, budgetary restrictions of the Slovak armed forces led to cessation of the air show activities and the next edition of the SIAD, although already planned for June of 2006, was cancelled at the beginning of that year. Therefore, the SIAD 2004, organized to celebrate Slovak accession to NATO, turned out to be the last of the series. The Slovak International Air Display, although being a successful event, well received by aviation enthusiasts and general public, became a history, after just eight editions.

At the same time, Slovenská letecká agentúra had started its aviation-related activity. In 2005, 2006 and 2008, the company successfully organized air show events at Sliač airfield, known as Slovak Air Fest, as well as Letecké dni Očová 2008. In 2011, the first edition of an air show known as the Slovak International Air Fest was organized, opening the new tradition of annual aviation events in Slovakia.

Certainly, the restrictions on public gatherings, caused by the coronavirus outbreak, forced the cancellation of the 2020 edition. Although there were many concerns related to the possibility of organizing such event in the following year, the organizers managed to held the SIAF in 2021. Due to mentioned modernization of Sliač air base, location of the show was changed to Malacky-Kuchyňa air force base. Although being a reasoned decision, it had not been well received by some regular visitors from the eastern part of Slovakia, as they needed to travel twice a usual distance.

However the 2021 edition of the show was marked by necessary preventive measures. There were no possibility to move freely around the area and separated zones for visitors were established, depending on their vaccination status. This significantly limited the possibility of seeing the aircraft at the static display, as they were available only from a particular side, depending on the abovementioned zone.

The pandemic preventive measures and the change of location were the main reasons behind quite low number of visitors in 2021. According to the organizers, there were 35,000 spectators at the show organized at Malacky-Kuchyňa – while the usual number of visitors at Sliač was reaching, and sometimes even exceeding, one hundred thousand.

Regarding participants of the SIAF 2021, the show offered an interesting variety of flying displays. The Flying Bulls team arrived with their historical aircraft including Bo 105 C helicopter, F-4U-4 Corsair and P-38 Lightning fighters, as well as the B-25J Mitchell bomber aircraft. The spectators could also see displays of Hawker Hurricane Mk.IV and MiG-15/Lim-2, that arrived from the Czech Republic and Poland, respectively.

Aerobatic displays were flown by Zoltan Veres, a Hungarian pilot being one of the SIAF regular participants; and two air force teams – Frecce Tricolori from Italy and Aerobatic Team Orlik from Poland.

Certainly, the biggest number of flying displays was presented by Slovak pilots. They included L-29 Delfin, C-27 Spartan, Očovskí Bačovia glider team, as well as the latest acquirement of the Slovak Air Force, UH-60M Black Hawk helicopter. Regrettably, this year there was no display of Slovak MiG-29 fighter at the SIAF, usually being one of the most-awaited highlights of the show.

In conclusion, it is worth mentioning about some numbers. A total of 44 aircraft were exhibited at the static display of the SIAF 2021. Another 41 could be seen during their flying displays and, including the opening flypast of the Slovak Air Force, the two days of the show offered the visitors to see almost 60 aircraft in the air. Participants of the show arrived to Malacky-Kuchyňa from thirteen different countries.

The 2022 edition of the SIAF is already scheduled for 27th and 28th August. Similarly to the last year, the Slovak International Air Fest 2022 will be organized at Malacky-Kuchyňa air force base.

Switching the focus inside the Arctic Circle

At the end of last week, the Ministry of Defence of the Russian Federation informed about the commencement of the MiG-31 combat duty in the Novaya Zemlya archipelago. The regular, although still officially called as […]

A record-breaking edition – winners and results of ´Aviadarts-2021´

On 4th September 2021, this year´s edition of International Air Crew Training Competition ´Aviadarts-2021´ was officially concluded. For two weeks, aviation crews from the Russian Federation, Belarus and China were completing assignments of the contest, […]