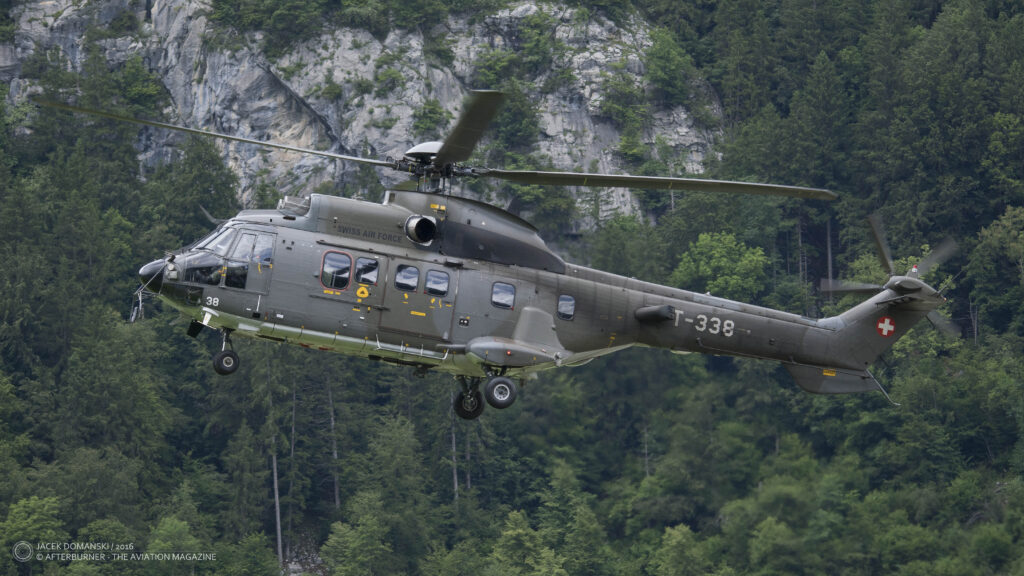 On 15th April 1965, the first of two prototypes of SA 330 Puma helicopter, registered F-ZWWN, performed its maiden flight. The rotorcraft was flown by Jean Boulet and Roland Coffignot, with an assistance of onboard engineers, André Ricaud and Gérard Boutin.

A few days ago we presented on our pages a story of Gazelle, a light multipurpose helicopter, that performed its first flight on 7th April 1967. However, April is also associated with an anniversary of the maiden flight of another French iconic rotorcraft, the SA 330 Puma. And here is a brief introduction to its history.

Similarly to the Gazelle, the Puma was designed and developed in the 1960s by Sud Aviation company. The works were launched in 1962, in response to the French Army requirement for a medium-class tactical helicopter as a successor of Vertol H-21. Specific demands of the French ground forces regarding the new rotorcraft included cruise speed no less than 250 kph, enhanced hovering ability and possibility to operate in all weather and climate conditions, while carrying up to twenty soldiers.

The Aérospatiale company immediately responded to the abovementioned requirement, launching development of a completely new project, initially designated Alouette IV. The design met with great interest of both the French Army and the French government, resulting with a contract worth twenty-million francs and signed in June of 1963. That agreement included order for manufacturing two prototypes of the new rotorcraft (later registered F-ZWWN and F-ZWWO) as well as five pre-production helicopters (F-ZWWP to F-ZWWT). The aircraft was also officially redesignated SA 330 Puma.

At the beginning, the new rotorcraft had to be powered by two Bastan VII engines but finally the Puma received two Turbomeca Turmo IIIC turboshaft engines, being an upgraded variant of an engine used with SE.3200 Frelon prototype.

The first five pre-serial helicopters, designated SA 330A, were ready in 1967. They immediately attracted attention of the Royal Air Force that at that time was also searching for a new medium tactical rotorcraft. Yet in April of the next year, a Franco-British agreement was signed, allowing the Puma to be co-produced by Sud Aviation and Westland Helicopters, as well as finally assembled by the latter. The British helicopters received a separate designation, Puma HC Mk.1 (although being recognized by the French company as the SA 330E).

On 12th September 1968, the first serial Puma, known as AS 330B, was manufactured for the French Army Light Aviation (Aviation légère de l’armée de Terre, ALAT). Initially, order for 88 helicopters was placed but finally the ALAT acquired more than 130 rotorcraft of that variant.

The Westland company made another 48 helicopters for the RAF. The British Pumas were assigned to No. 33 and No. 230 Squadrons, as well as to No. 1563 Flight at RAF Belize.

The helicopter quickly gained international recognition, being well-rated for its exceptional performance, versality and durability. It resulted with several export sales – the Pumas were acquired by more than thirty air forces over the world. The SA 330 was also bought by various civil operators that used the helicopter for offshore operations, VIP and passenger transport.

In 1974, licence for manufacturing the Puma was bought by Romania. The first helicopter, made by  IAR Brașov, was ready yet in the next year and designated IAR 330. The Pumas were also assembled in Indonesia and underwent a significant, domestically-managed modernization in the South Africa, resulting in creating a helicopter known as Oryx.

In 1975, the Aérospatiale company revealed an upgraded variant of the helicopter, designated AS332 Super Puma. The rotorcraft was intended to fulfil the needs of both the ALAT and the RAF, regarding the necessary modernization of existing fleet of the SA 330, and additionally focused on conquering new foreign markets.

The Super Puma made its first flight on 13th September 1978. It was equipped with new Turbomeca Makila engines, allowing to decrease fuel consumption and extend range of the rotorcraft. Moreover, the AS332 featured several technical modifications, representing the highest market standards of the era.

As a consequence of development of the Super Puma, production of the SA 330 was ceased. A total number of 697 Puma helicopters was built, in more than ten variants.

The Super Puma is being manufactured until today. Due to several merges and acquisitions, the helicopter was initially made at Aérospatiale, then Eurocopter and currently by Airbus Helicopters as H215. Since 1990, all the Super Pumas in the military service were redesignated AS532 Cougar, and now are produced and marketed as H215M.

It must be noted that the SA 330 Puma has a long and extensive operational history that includes combat missions all over the world, United Nations assignments, disaster relief missions and, above all, a series of clandestine, special forces missions and covert operations. The helicopter have become one of the special forces favourites, being extensively used by the SAS and similar units.

In French service, the Puma was for the first time used operationally in September 1979, during Operation Barracuda in Africa. The SA 330 helicopters were also participating in the Gulf War, NATO operations in former Yugoslavia, as well as were deployed to Chad, Niger and other African countries.

The British Pumas were being operationally used during the Troubles, the Gulf War, peacekeeping operations in Africa, several disaster relief and humanitarian missions, as well as being deployed to Venezuela, Yugoslavia, Iraq and Zaire. An interesting fact is that one Argentinian Puma was captured during the Falklands War and then used for training purposes in the UK.

During 1990s and 2000s, the Pumas still remaining in active service underwent a series of modernizations. They were either upgraded the helicopters to the Super Puma standard or turned into new, locally-developed variants of the rotorcraft. The IAR 330L SOCAT (Sistem Optronic de Cercetare și Anti-Tanc) anti-tank and ground support helicopter developed in Romania or Westland Puma HC Mk.2 – the British modernization including glass cockpit, Makila engines, as well as new avionics and communication suite, are good examples of such modifications.

Russian Helicopters holding company has just announced that a modernized Ka-32A11M fire-fighting helicopter is going to be presented at the International Aviation and Space Salon MAKS-2021. The scope of K-32 modernization includes a glass cockpit […]

On 11th March 1993, Airbus A321, being one of the most successful airliners made by the company, performed a maiden flight. The A321 is a member of a popular A320 family of passenger aircraft, produced […]