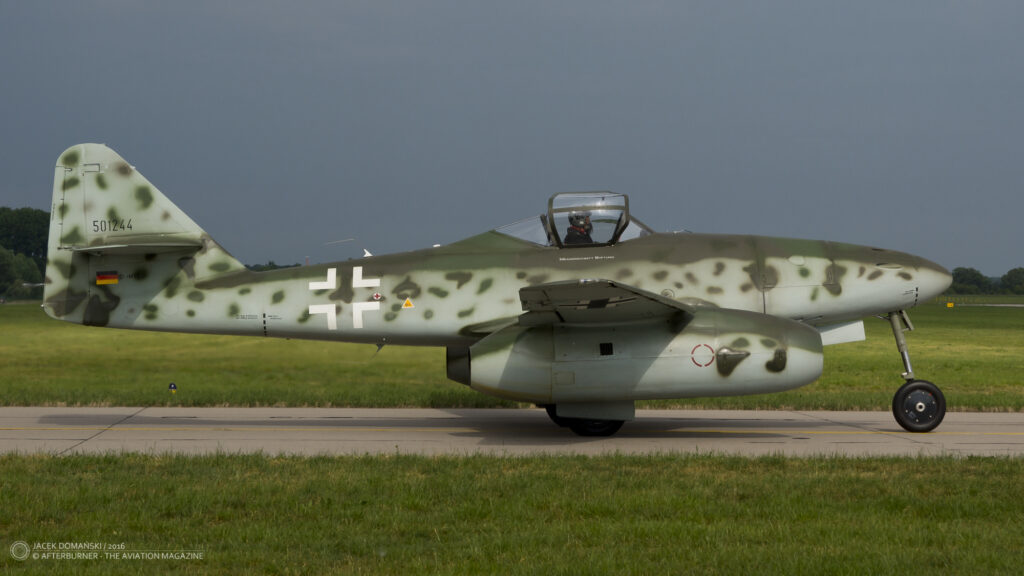 It is only two weeks to another air show event to be held in the Czech Republic – Letecký den Cheb (Aviation day Cheb). The event will be organized on 13th and 14th August at Cheb airfield, Western Bohemia.

Cheb airfield is one of the oldest in the Czech Republic, as it was opened in 1917. It also has a well-established tradition of air shows, with the first event organized already in 1923. The ´aviation days´ were then held for ten consecutive years by the military aviation school based at the airfierld.

During the World War II, Flugzeugwerke Eger GmbH (English: Aviation works Cheb – FZE) built another airfield in the city and used it for company purposes. FZE was taking care of maintenance and repairs of the Luftwaffe aircraft, including He 111, He 177, He 219 and finally the first combat jet in the world, Me 262 ´Schwalbe´ (English: swallow).

At the end of the war, both airfields were heavily bombed by American aircraft and significantly damaged. The first one, with only a grass runway, was not repaired after the war and was abandoned. The FZE airfield, having both grass and concrete runways, was restored to operational condition and then used by the Czechoslovak Air Force. Although there were some attempts to bring back the tradition of local aviation days there, that idea was finally abandoned in the early 1950s.

In 1997, the civil aviation took over the Cheb airfield and yet in the same year the first post-war air show was organized there. That resumed tradition is successfully continued until today and public aviation day is organized in Cheb usually every second year.

This year´s edition of the Aviation day Cheb will host several historical aircraft that, without any doubts, could be described as iconic. The undisputed highlights of the show will be Hawker Hurricane Mk.IV and Messerschmitt Me 262 ´Schwalbe´ – two well-known fighters of the Second World War. The Hurricane is considered as symbol of the Battle of Britain and sucessfull defence against the Luftwaffe, while the Me 262 – although being the first operational jet aircraft in history – is an icon of desperate German attempts to alter the course of the war. In addition, the Me 262 will meet in Cheb its Allied opponent, no less legendary North American P-51D Mustang.

The flying programme of the Cheb air show will also bring a variety of aircraft related to the Czech (and Czechoslovak) aviation history. Among them, there will be C-11 (Yak-11) and L-29 Delfin training aeroplanes, Lockheed Electra L-10A and Letov LF-107 Luňák glider.

Modern aviation will be represented by the Czech Air Force and its aircraft – JAS-39 Gripen (only a flypast on Saturday), Enstrom 480B and PZL W-3A helicopters. Aerobatic displays are going to be performed by well-known Martin Šonka, Red Bull Blanix Team and the Flying Bulls Aerobatic Team.

In addition, the visitors to Cheb airfield will be able to see flying displays of Beechcraft C-45H Expeditor, a few aircraft of the Classic Trainers collection from Plzeň (including Stinson AT 19 / Reliant Mk.III, Boeing Stearman and Pilatus P2), as well as performance of Bell 206 JetRanger helicopter, German Historic Flight team and Cessna Citation Mustang.

The first announcements for the 2019 Sanicole Airshow

After the one-year gap, caused by the Belgian Air Force days organized in September in Kleine-Brogel air force base, just a few kilometres from the Sanicole aeroclub, one of the most interesting European airshows is […]