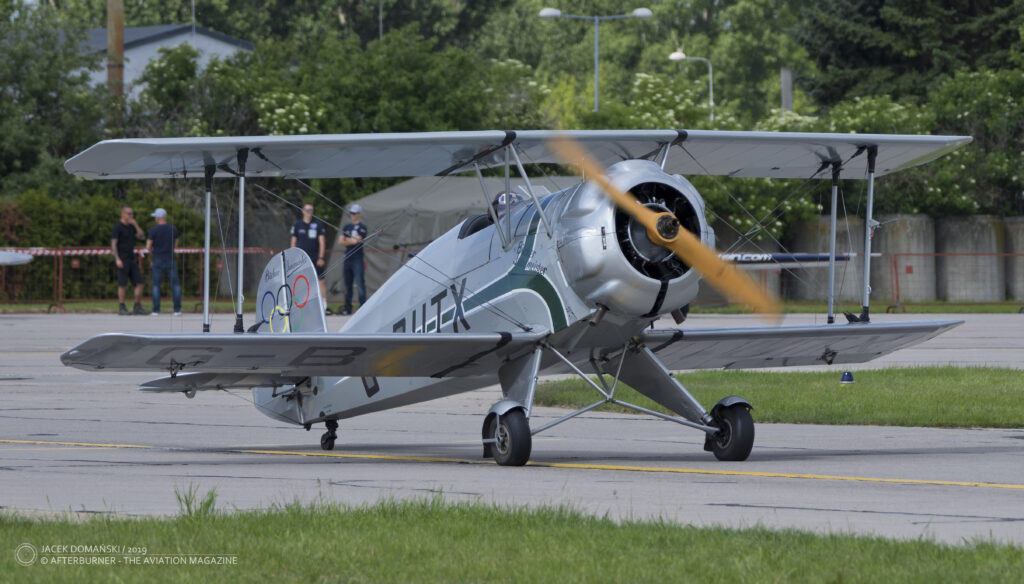 At the beginning of October 2021 we had a possibility to visit a historical aircraft collection located in western Bohemia, at Plzeň-Lině airfield. The Classic Trainers association – similarly to Točna aviation museum we have already mentioned on our pages – is an organization bringing together the owners of vintage aircraft and their pilots. All aeroplanes are privately owned and just jointly hangared, marketed and maintained by the association.

The collection is located at former military airfield near Plzeň and aircraft are stored in one of its hangars – therefore the aviation museum based on that collection is named after that place, the Hangar 3. Apart from taking care of the historical aeroplanes, the association conducts educational activities, promotes aviation in general and honours Czechoslovak pilots who served in the RAF, as well as popularises history of Plzeň-Lině airfield. A small exhibition of various historical items – related to the airfield and aviation, obviously – is also available at the site.

At the moment, collection of historical aircraft in Plzeň includes Boeing-Stearman N2S-5, AT-6C Harvard Mk.IIa, Pilatus P-2-05, Zlín Z-526M, M-1D Sokol, Stinson AT-19, Bü 133C Jungmeister, Fairchild Model 24 (Argus Mk.III) and the newest addition, acquired in October 2021, Morane-Saulnier MS.880 Rallye. And here is a brief introduction of each of them:

Stearman (Boeing) biplane is a well-known classic training aircraft from the World War II era. History of its design and development was already mentioned on our pages, as we have focused on that aeroplane within our Photo of the Week series in 2019 and 2021, as well as Aviation History Friday series.

The aircraft being a part of the Classic Trainers collection was manufactured as N2-S5 (c/n 75-8530) in 1943. Initially, it was operated by the US Navy and then sold to private owner in 1948. The biplane was then used for many civilian purposes, including crop dusting, until 1987. That year, its current owner decided to restore its original look from the 1940s.

In 2010 the N2-S5 arrived to Plzeň and became a part of the collection there. Currently, the biplane wears a livery representing the aircraft FJ934 of the 31st Elementary Flying Training School RAF in Canada.

The AT-6 trainer was initially manufactured by North American as AT-6C-15NT Texan (c/n 42-44038) and used to train the USAAF pilots between 1943 and 1950. Then, similarly as the aeroplane being now exhibited at Točna airfield, was converted into Harvard Mk.IIa standard and sold to the South African Air Force.

In the 1990s, the aircraft was sold to private operator and brought back to the USA. It is worth to mention that the Harvard managed to survive in a particularly original condition. That fact was noted and awarded during Oshkosh air show 2009, when it was recognized as the most original AT-6 preserved until today.

The aircraft was acquired by Czech owner in 2011 and then transferred to Plzeň-Lině. Since 2017 the Harvard is presented in livery of the 17th Service Flying Training School RAF (FX352 / ´white 11´).

Another training aircraft, the Pilatus P-2-05, was developed in Switzerland in the mid-1940s and then used by the Swiss Air Force until 1981. There were approximately 55 aircraft of that type manufactured in total and more than 40 survived the military service. After retirement from the Swiss Air Force, they were sold to various private operators in Europe and the United States. Several of them are airworthy until today, sometimes playing a role of Luftwaffe aircraft in Hollywood movies, like Indiana Jones and the Last Crusade, released in 1989.

The aircraft being a part of the Classic Trainers collection was manufactured in 1947. It was acquired by its current owner in 2013 and then registered as OK-PTW.

History of development and service of Zlín Trenér, the next aircraft from the collection, was also featured on our page – therefore we will introduce just a few facts related to that particular aeroplane from the Hangar 3. It was manufactured in 1966 as Z-326 and then used in France until 1977. Then it was converted into Z-526 and operated in Slovakia and Poland. It became a part of the Classic Trainers collection in 2015.

The Mráz M-1 Sokol was the first post-war aircraft designed and produced in Czechoslovakia. It was manufactured between 1946 and 1950, with almost 300 examples made in total. Apart from the domestic market, those aeroplanes flew in Germany, Switzerland, Hungary, Finland and Italy. The M-1 Sokol recorded several achievements in sport aircraft category, including a few long-distance rallies to Cape Town, Australia or Kazakhstan. The aircraft now exhibited at the Hangar 3 was manufactured in 1949, with c/n 281.

The Stinson Reliant is an aircraft developed in the early 1930s by the Stinson Aircraft Division in Michigan, USA. It was being manufactured until 1941 in both civilian and military variants, designated as SR and AT/UC, respectively. The Reliant was widely used as a liaison and utility aeroplane by the USAAF, the RAF and the Royal Navy. In the post-war years, the aircraft retired from military service were also marketed as Vultee V-77.

The aircraft that can be seen at the Hangar 3 represents the AT-19 military training variant. It was acquired by the Fleet Air Arm and converted into photo-reconnaissance version, known as the Mark III. According to the Classic Trainers web page, the aircraft was made in 1942 (c/n 004) and is the second oldest aeroplane of that type in the world, not being converted for civilian purposes. Moreover, the aircraft preserved its original condition, including the interior. The Reliant belongs to the collection since 2016.

The Bücker Bü 133C Jungmeister of the Classic Trainers was also described in details within our Photo of the Week series in October of 2021. That article also includes a brief story of development and service of that biplane; thus we invite you to check it here.

The Morane-Saulnier MS.880 Rallye is a light aircraft developed by the Morane-Saulnier company in the late 1950s. Later, its manufacturer merged into SOCATA, and since that time the aeroplane was marketed as the SOCATA Rallye family.

The aeroplane was quite successful on the European market and more than 3,300 examples were made. However, it did not achieve the expected level of sales on the US market – although that was the initial idea and main impulse to create that aircraft. When manufacturing of Rallye was ceased in France, rights for licence production were sold to Poland and the aeroplane was then produced by Państwowe Zakłady Lotnicze (State Aviation Works, PZL) and designated ´Koliber´ (a hummingbird).

Apart from civilian market, the Rallye was also operated by several air forces and governmental agencies all over the world. The particular example being a part of the Classic Trainers collection was manufactured in 1966 and is currently presented in a French military livery of Escadron de transport 44 Mistral (44-CZ).

Last but not least, there is the Fairchild Model 24 (aka Fairchild Argus or UC-61 Forwarder). The aircraft was designed by Fairchild Aviation Corporation in the early 1930s, as an answer for airliner market shrinkage, being a consequence of the Great Depression. It quickly achieved a great success on civilian market and was also adopted by the USAAC, the RAF and subsequently by other Allied air forces.

Argus Mk.III was the British designation for Model 24R (aka UC-61K). The aircraft were delivered under the Lend-Lease act and majority of them were operated by the Air Transport Auxiliary organization.

That particular aircraft being now a part of the Classic Trainers collection was manufactured in 1944 (c/n 1120). According to the web page of the association, it was initially operated by the RAF in Algeria. Then, after retiring from the military service, it was sold to private owner and still used in Algeria and then Morocco. In the 1980s, the Argus changed hands again, was shipped to Hamburg and a reconstruction process was launched. Regrettably, it was put on hold shortly thereafter, due to lack of financial resources.

Then, in 2017, it was acquired by a Czech owner and joined the Hangar 3 collection. Obviously, a lot of effort is still necessary to restore that aeroplane to airworthy condition, but the most important information is that works already began. The final look of the aircraft was not set yet, although it would be, most probably, one of the variants used in Czechoslovakia until the 1960s.

According to the association, that preserved Argus is a unique example, being one of only four Ranger engine powered aircraft of that type that survived until today (from all the RAF-delivered Argus aeroplanes with that engine model).

It should be also mentioned here that the well-known Supermarine Spitfire Mk.XVI (TE184) was also a part of the Classic Trainers collection between 2012 and 2021. The aircraft, being a frequent participant of aviation events in the Czech Republic and other Central European countries, for almost ten years flew in a liveries honouring Czechoslovak pilots in the RAF. Nevertheless, nothing lasts forever, and in the end of 2021, the TE184 was acquired by its new owner and is now stored at the Biggin Hill Heritage Hangar in the UK.

Although the Classic Trainers collection is just the association of owners of historical aircraft and not a regular aviation museum, the aeroplanes from the Hangar 3 are also available to see for aviation enthusiasts and general public.

First of all, one can meet them at aviation events being organized in the Czech Republic and in neighbouring countries. During the current season, some aircraft from the collection will participate in Aviation Fair (Aviatická Pouť) in Pardubice (28th and 29th May) and then Historical Airshow in Mladá Boleslav (18th June).

The Hangar 3 is also available for visitors during open doors days, being organized a few times every year. The nearest event of that kind is scheduled for 7th May 2022 and offers a perfect possibility to see all the above mentioned aircraft up close.

Wi-Fi and satellite Internet for Ansat

Kazan Helicopters company (being a manufacturer of Ansat and a part of Russian Helicopters holding) has received an approval from the Federal Air Transport Agency (Росавиация), to equip Ansat helicopters with Mku30 satellite communication system. […]