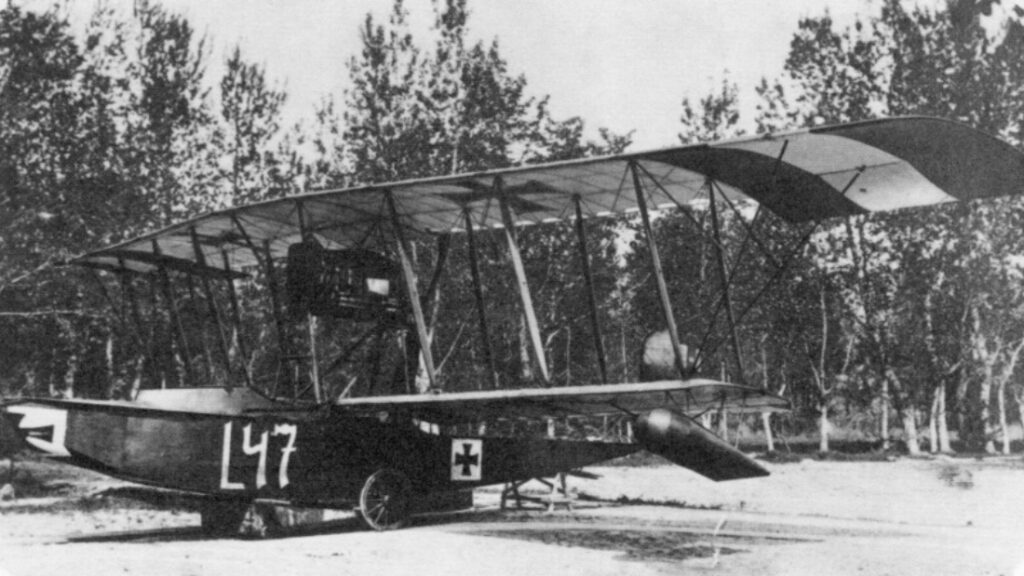 On 22nd July 1914 (or 23rd July, according to some sources), three Austro-Hungarian type E flying boats performed reconnaissance flight near the Adriatic coast of Montenegro. It was the first operational use of naval aviation in Europe.

History of Kaiserlich und königlich (English: Imperial and Royal) naval aviation dates back to 1910, when it was, for the first time, discussed at naval department of the Austro-Hungarian ministry of war (k.u.k. Kriegsministerium Marinesektion). At the end of the year 1910, the first naval pilots began their training at military flying school (Militäraeronautischen Station) in Wiener Neustadt.

The first aircraft of the Austro-Hungarian Seeflieger was based on Blériot monoplane and it was initially a personal property of Viktor Klobučar-Rukavina. Already in 1909, and at his own expenses, he attended flying course in France and then began to build his own copy of the Blériot aeroplane. When the Austro-Hungarian naval aviation was officially formed, Klobučar-Rukavina handed over his still unfinished aircraft to the needs of the unit. Then, with assistance of naval aviation engineers, the aeroplane was rebuilt and finally became not only a biplane but also a floatplane.

In 1913, the Austro-Hungarian naval aviation acquired four Donnet-Léveque flying boats from France and established its own flying school (Schulflugstation) on Cosada island (nowadays, Kotež in Croatia). In November of that year, the unit received its first flying boats of Austro-Hungarian origin, Lohner E.

The aircraft was designed by Igo Etrich, the famous aviation pioneer and developer of Taube aeroplane. The E type flying boat was made in biplane pusher configuration and powered by single engine, generating 85 hp (later replaced by a 100 hp powerplant). Approximately thirty examples were built in total, and the seventeenth aircraft (E17) was the first naval aeroplane to be armed with a machine gun – receiving an informal name of the ´battle-flying boat´(Kampfflugboot).

On 28th June 1914, Archduke Franz Ferdinand and his wife Sophie were assassinated in Sarajevo. It quickly escalated into the July Crisis, a series of diplomatic and military jostling between the European powers. In the meantime, Austria-Hungary was on its way toward war with Serbia.

While preparing to war, the navy (k.u.k Kriegsmarine) decided to strengthen its presence in strategic points of the Dalmatian coast, including the Bay of Kotor. On 22nd July, three Austro-Hungarian semi-dreadnought battleships – SMS Radetzky, SMS Erzherzog Franz Ferdinand and SMS Zrínyi – left Pula and headed Boka Kotroska. Each of the battleships was carrying one Lohner E flying boat (E18, E20 and E21), deployed there to establish naval aviation detachment in Kumbor.

After arrival to Teodo (nowadays, Tivat in Montenegro), the flying boats were disembarked and their pilots – Woseček, Banfield and Konstantin Magli – performed some reconnaissance flights within the area of Kotor and along the border with Montenegro. Although there is still some uncertainty about the exact date, the mission flown by three Lohner E aircraft in the Bay of Kotor is commonly considered as the first operational use of the naval aviation in Europe.

On 23rd July 1914, Austria-Hungary sent an ultimatum to Serbia. The crisis escalated even more and, within a few days, led to outbreak of the World War I.

Gottfried Freiherr von Banfield, one of the pilots that performed the first operational naval mission in Europe, later became one of the most-known Austro-Hungarian pilots. He was nicknamed the ´Eagle of Trieste´, scored nine aerial victories – being the only ace who flew a flying boat – and was awarded with Military Order of Maria Theresa.

Wenzel Woseček was one of the aviators that participated in the first air raid against Italy (Ancona raid on 23rd May 1915). A few days later he was captured by the Italians after performing emergency landing near Venice, but two years later managed to escape and returned to service. After the war, but for a short time, Woseček joined the Czechoslovak merchant navy.

Konstantin Maglić, took part in the first air raid performed by Lohner flying boats, together with his observer Oberleutenant Pieler. On 14th August, while flying the E18 aircraft, they attacked Krstače in then Serbia. In July of 1915, Maglić´s aircraft was shot down and he was captured by the Italians.

Nevertheless, Maglić managed to escape and go to New York by a ship, then returned to Europe under a false name. He was revealed and put into prison but shortly after escaped again. Trying to sail away from England, Maglić was captured and sent to POW camp. He was finally released in 1917, on medical grounds, left the UK but then was interned in the Netherlands.

The story of Maglić´s escapes and military service was told in a book he wrote in the early 1930s. It was translated to English and published in 1932 under the title ´The Dandy Hun, being the adventures and escapes of Konstantin Maglić´.

Dornier Do 24T-3, exhibited in Flugwerft Schleißheim (an aviation branch of the Deutsches Museum in Munich), Oberschleißheim, October 2019 In August of 1934, the Reich Ministry of Aviation (Reichsluftfahrtministerium – RLM) issued a request for […]

Russia is getting ready to celebrate the Navy Day

The Day of the Russian Navy (День Военно-Морского Флота) is not only the biggest gala of the Russian fleet, but usually is recognized as the second largest military holiday in Russia (after the Victory Day […]