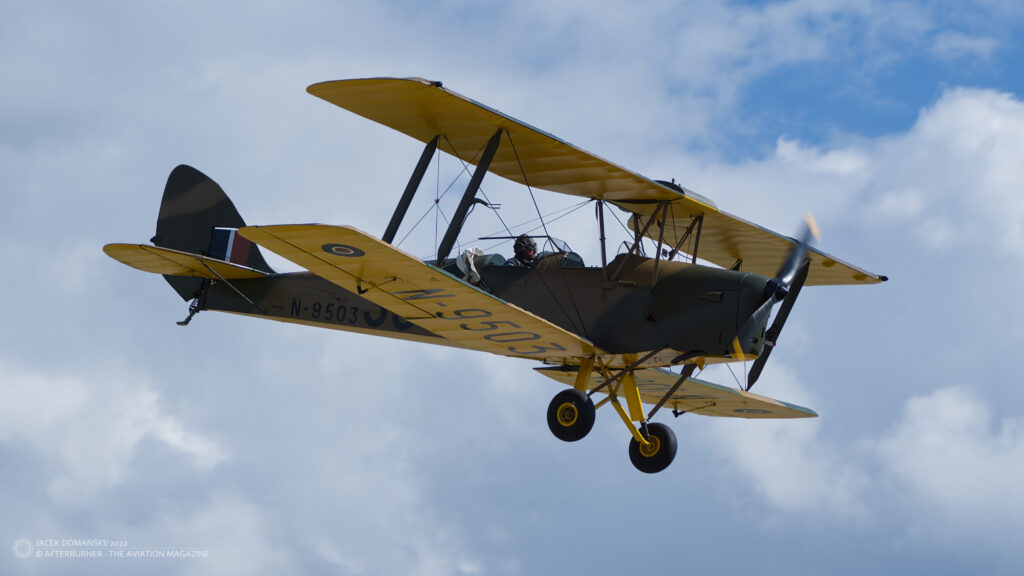 During the last weekend of May, thousands of aviation enthusiasts headed for Pardubice in the Czech Republic, where this year´s edition of Aviation Fair (Aviatická pouť) was held. After a two-year hiatus caused by coronavirus restrictions, the biggest Czech air show returned with great flying programme and celebrations of its 30th anniversary.

Although they had only little time to prepare the show, the organization team did really great job with the programme of the 30th edition of Aviation Fair. It was not clear until the last moment if government restrictions related to mass public events would be lifted enough to let the show be organized as intended. Fortunately, all these restrictions were cancelled in March but that meant there was just three months left to invite and confirm participants for both static and dynamic displays.

Thankfully, all preparations were finalized on time and Aviation Fair offered an interesting set of participating aircraft, including some premiere appearances.

The star of the 30th anniversary edition was, without any doubts, Hawker Sea Fury FB.11 – British deck fighter developed in the late 1940s by Sydney Camm. Although made too late to fly in the World War II, the Sea Fury had proven its advantages in the Korean War, being operated by the Royal Navy and the Royal Australian Navy (a complete history of development and service of the Hawker Sea Fury can be found in our article issued within the Photo of the Week series). It was exactly the Royal Navy aircraft of No. 802 Naval Air Squadron, that shot down a Chinese MiG-15 fighter and made the Sea Fury famous (also that interesting duel between propeller-driven and jet-powered aircraft was told in one of our articles issued in June).

After seventy years, the Sea Fury and the MiG-15 met again during the 2022 edition of Aviation Fair. This was because CS-102, a licence-made Czech variant of the MiG-15UTI, was another participant of the show. Therefore, visitors to Aviation Fair had a perfect opportunity to compare both aircraft, not only at the static display but also in the air. That particular CS-102 jet was manufactured in 1955, and since 2013 is being based at Hradec Králové airfield, owned and operated by Czech Flying Legends company.

For a number of years, Aviation Fair is closely linked to the Flying Bulls collection of aircraft. They usually are among highlights of the show and the 30th edition was no exception from that rule. This year, visitors to Pardubice airfield were able to watch amazing aerobatic display performed by Bo 105 rotorcraft, see one of the latest additions to the Flying Bulls fleet, Bell Cobra 209/AH-1F attack helicopter, Bell 47 G-3B-1 ´Soloy´ rotorcraft, as well as two historical aeroplanes – P-38 Lightning and B-25 Mitchell – plus Alpha Jet A.

One of the interesting things about the Bo 105 display was, apart from the amazing aerobatic capability of that rotorcraft, it was flown by Felix Baumgartner. The man who, in 2012, jumped out from a helium balloon from the stratosphere and became the first person to break the sound barrier without being in a powered vehicle.

Certainly, among the aircraft flying with Red Bull logo the Czech-based aerobatic group could not be missed. However, at the 30th Aviation Fair, the Flying Bulls Aerobatic Team was performing their show with only two aircraft – due to technical reasons related to aeroplane maintenance. Nevertheless, their display was great as usual and recalled the times of the Flying Bulls Duo.

In addition to the Z-142, a few more CLV aircraft participated in the flying programme, including L-39 Albatros training jet, Enstrom, Mi-8 and Mi-2 helicopters, and C-11 (Yak-11) training aircraft from the 1950s. A variety of the CLV aeroplanes and helicopters was also available at the static display.

Among the other CLV flying displays, two were worth a special notice. The first of them was a joint show performed by Enstrom and Mil Mi-2 helicopters. The latter was for many years the backbone of rotorcraft pilot training in the CLV but in 2018 was replaced in that role by Enstrom 480B. Over the next few years, the last airworthy Mi-2 ´0711´ was still used as a display aircraft, participating in several aviation events in the Czech Republic. However, nothing lasts forever and – most likely – that helicopter would be finally retired in the spring of 2023. Therefore, the display flown at the 30th edition of Aviation Fair was one of its last public appearances.

Another eye-catching show was the joint display of the Mi-8 of the CLV and the abovementioned AH-1 Cobra rotorcraft. For several minutes two aircraft circled around the Pardubice airfield, offering an impressive view that does not happen very often.

Historical aircraft were always the strong point of Aviation Fair programme and so it was this year. Those who came to Pardubice were able to enjoy classic biplanes, such as Bücker Bü 133 Jungmeister, Bü 131 Jungmann and Stearman N2S-5 Kaydet; an interesting training aircraft from the World War II, Ryan ST-3KR / PT-22 Recruit; the so-called ´the best bush aircraft ever made´, DHC-2 Beaver; as well as beautiful classic line of the ´Baby-Electra´, Lockheed 12A Electra Junior.

Although the organization team this year decided to skip traditional dynamic re-enacting displays on the ground, a static camp honouring Czechoslovak pilots in the Royal Air Force was arranged. It resembled a training air station from the World War II era, including Miles Magister Mk.I and de Havilland DH.82 Tiger Moth aircraft. Both of them were also participating in the flying programme.

This year, the Czech Air Force could be seen mainly at the static exhibition that included JAS-39 Gripen and L-159 ALCA jets, as well as Mil Mi-24V helicopter in a special NATO Tiger Meet livery. It must be noted here that it was also one of the last possibilities to see that helicopter at the air show. The 221st Helicopter Squadron of the Czech Air Force will be soon re-equipped with Venom and Viper rotorcraft duo. In addition, in the recent past some of the Mi-24 from its inventory were reportedly donated to Ukraine.

The only flying display by the Czech Air Force was flown by PZL W-3 Sokół (English: falcon) helicopter. Without any doubts, this year´s edition of the search-and-rescue show by the W-3 crew is one of the best performances with that type of rotorcraft ever seen. Extremely dynamic, showing the great capabilities of the Polish-made rotorcraft and top skills of its Czech crew, the display is a highlight of every aviation event where the W-3 appears.

One of the topics of the 30th edition of Aviation Fair was the 80th anniversary of Operation Anthropoid – assassination of Reinhard Heydrich by Czechoslovak resistance. And for that reason, a parachute jump from the Mi-8 helicopter was included in the programme, to commemorate airdrop of Silver A and Silver B resistance teams. Although, due to weather conditions, it was performed only on Sunday.

The changing and windy weather, together with some showers, forced some changes in the flying programme of Aviation Fair. Nevertheless, majority of the displays were flown as scheduled, despite a few cancellations on Saturday – the abovementioned parachute jump, dogfight scene from the World War I and traditional opening display of Blériot XI replica.

The 30th anniversary edition of Aviation Fair attracted more than twenty five thousand spectators, therefore still being the biggest air show event in the Czech Republic. In addition to the main programme of flying displays – that lasted five and half hours – and static aviation exhibition, the visitors to Pardubice airfield could also follow a variety of side shows, presentation of police and army equipment, as well as enjoy the so-called Air Food festival.

Maiden flight of PZL.44 Wicher (English: Gale), a prototype of Polish two-engine airliner. The inter-war years were a period when aviation truly boomed all over the world. Especially in the 1930s, the popularity of air […]