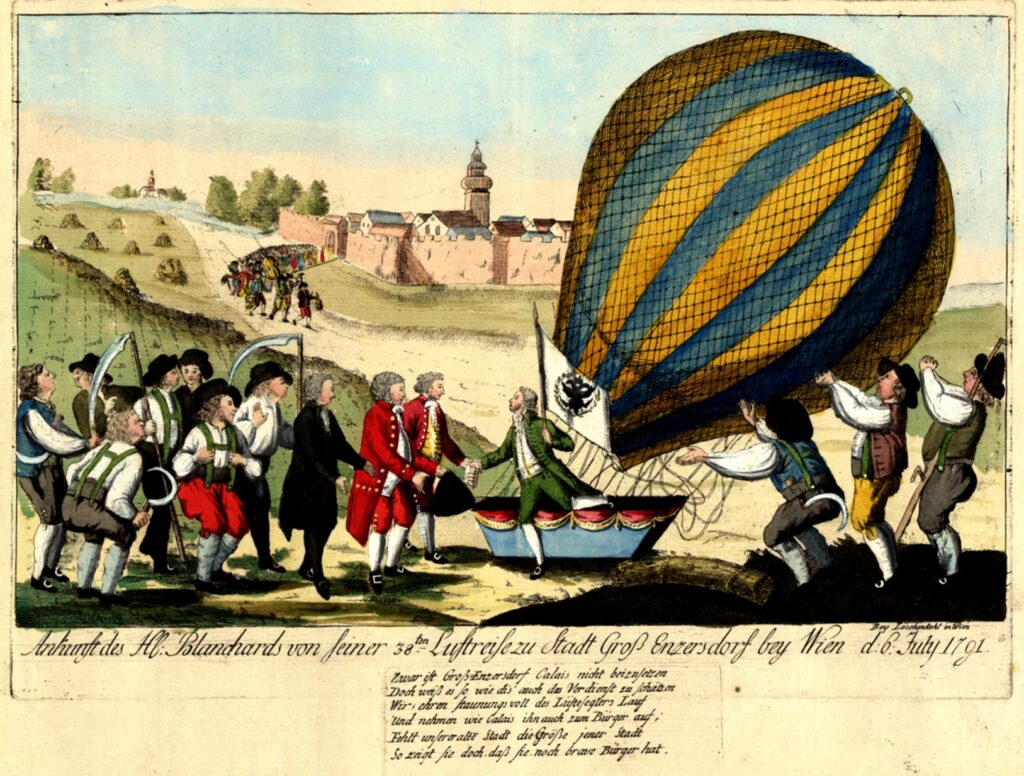 Since the childhood, Blanchard, a son of a lathe-operator, was known of his mechanical skills, spark of invention and desire to experiment. He was developing simple automats, had built a pedal-powered automobile and designed a hydraulic machine to supply Château Gaillard with water.

Conquering the air was among Blanchard´s deepest desires. In the early 1780s he worked on a ´flying ship, shaped like a bird, with six wings and a tail´ and even organized a public demonstration of his development on 5th May 1782. Regrettably, Blanchard´s ´bird´ was not able to take-off.

Still undaunted, Blanchard focused on hot air balloons developed by the Montgolfier brothers. Being inspired by their achievements, Blanchard successfully took-off in his first hydrogen gas balloon on 2nd March 1784, just a few months after the first piloted flight by Montgolfier. Until the end of the year, he made at least three more piloted flights, performed in Rouen and London, and developed a simple propulsion mechanism with flapping wings and a windmill.

While staying in London, Blanchard became friend with John Jeffries – a physician, scientist and military surgeon who served with the British Army during the American Revolution. Born in Boston, Jeffries was among the first weather observers. His works were later honoured by establishing National Weatherperson´s Day celebrated on 5th February each year, the day of his birthday.

In 1779, Jeffries moved to England and was employed by the Crown. He also financially supported Blanchard´s works on hot air balloons. On 30th November 1784, Jeffries made his first flight, joining Blanchard on the route from London to Kent. During that flight, Jeffries wrote and dropped four notes, addressed to his friends. One of them was found and delivered to the addressee, therefore being the oldest piece of airmail in existence.

On 7th January 1785, Blanchard and Jeffries took-off from the area of Dover Castle and headed France. After a flight lasting two hours and a half, the aviation pioneers successfully landed near Guînes in Pas-de-Calais region. The first manned flight over the English Channel became a reality – 124 years before the first aeroplane managed to repeat it.

In the following years, Blanchard toured Europe and North America. He was the first to fly the hot air balloon in Belgium, the Netherlands, Poland, Bohemia (the display performed at coronation of Emperor Leopold II) and the Americas.

Among other Blanchard´s interests there was a parachute and he was among the first users of the new invention. In 1793 he used a parachute to abandon a ruptured balloon. Since then, he even more focused on improving their development.

On 20th February 1808, Jean-Pierre Blanchard suffered a heart attack while flying over the Hague. He fell from the balloon and died of his injures on 7th March 1809.

On 24th September 1940, the Vichy France performed its first air raid on Gibraltar, a British Overseas Territory located at the southern tip of the Iberian Peninsula. Approximately sixty bombers of the Vichy French Air […]

On 17th June 1910, Vlaicu I, an aircraft built by Aurel Vlaicu, performed its maiden flight near Cotroceni Hill (Dealul Cotroceni) in Bucharest. It was the very first flight of a powered aeroplane in Romania […]