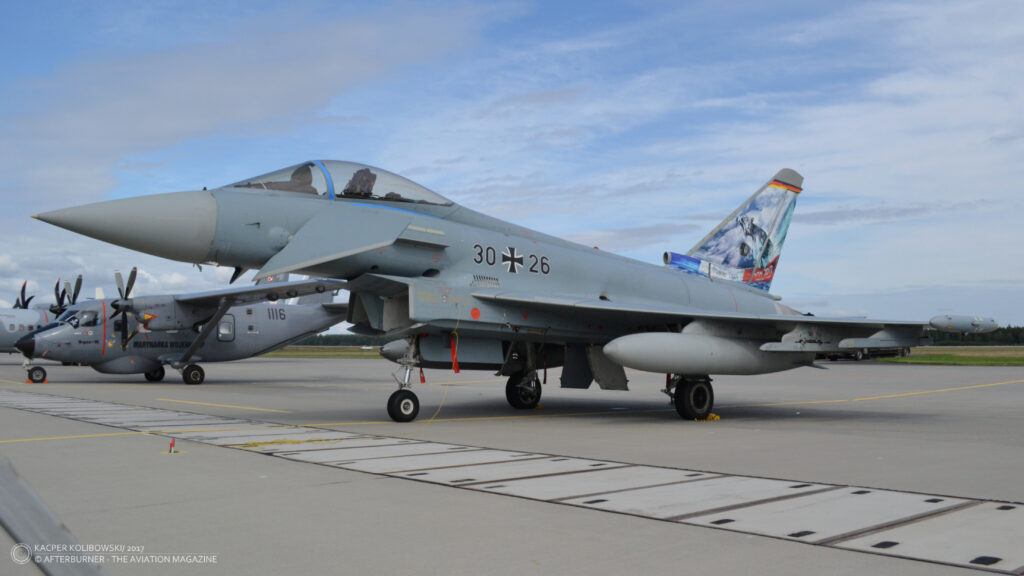 The history of this unit of the German Air Force dates back to the very beginning of the 1960s. Exactly on 5th May 1961, Jagdgeschwader 74 (74th Fighter Wing – JG 74) was activated with newly established air base in Neuburg a.d. Donau, Bavaria as its home airfield.

Initially the unit, being the last fighter wing formed in the West Germany, was equipped with F-86K Sabre aircraft. However, as early as in 1964, its conversion to the F-104G Starfighter jets began, with the last aircraft of this type delivered to JG 74 in 1966.

In 1973, JG 74 was named after the famous German WWII fighter ace Werner Mölders. The official act was issued by the then Luftwaffe commander general Günther Rall, on 22nd November 1973, on the 32nd anniversary of Mölders´ tragic death in an aviation accident.

However – despite naming Luftwaffe wings after famous German military pilots, such as Richthofen, Boelcke and Immelmann, was a common tradition in the 1970s – to name the unit after the pilot who once served in Condor Legion during the Spanish Civil War and later took part in the Second World War serving Nazi regime, was considered definitely inappropriate. Therefore, on 11th June 2005, the aforementioned honorary name of JG 74 was finally dropped.

Regrettably, the F-104 Starfighter service with the Luftwaffe caused many issues. The aircraft, initially developed as high-altitude interceptor intended to operate in good weather conditions, turned out to be inappropiate to operate in demading role of multipurpose fighter, especially in the challenging environment of the northern Europe. As a consequence, the West German Air Force had lost 292 jets of that type (out of 916 aircraft acquired in total), and as many as 116 pilots who flew them, including several members of JG 74.

Therefore, in 1974, the unit switched to F-4F Phantom II aircraft. The F variant was in fact a downgraded version of F-4E, not able to use medium range AIM-7 Sparrow air-to-air missile, as Germany was forbidden to use that type of weapon until it regained full sovereignty in 1990. Only after that, all F-4Fs used by the Luftwaffe were upgraded to ICE standard and then equipped with AIM-120 AMRAAM missiles.

The first decade of the 2000s brought further changes to the aeroplane inventory of Jagdgeschwader 74. In the summer of 2006, JG 74 became the first German unit to receive Eurofighter EF-2000 Typhoon aircraft, chosen as the successor to the Phantom in the Luftwaffe. Yet on 12th  June of the same year, the last F-4F of JG 74 made its final flight from the Neuburg air base. Nevertheless, the process of withdrawal of the Phantoms from active service with the German Air Force lasted until 2013.

The 2013 was a year of organisational changes for the unit. On 18th March, JG 74 and its constituent fighter squadrons Jagdgeschwader 741 and Jagdgeschwader 742 took over the ´Tiger Spirit´ tradition from Jagdbombergeschwader 32 – the fighter-bomber unit that was disbanded earlier in that year and was a full member of the NATO Tigers Association. Since then, JG 74 became known as ‘Bavarian Tigers’ and actively contributed to the Association. Then, on 1st October 2013, JG 74 was renamed to Taktisches Luftwaffengeschwader 74 (TakLwG 74), as a result of restructuration of the German armed forces.

Being a member of the NATO Tigers Association, the ‘Bavarian Tigers’ regularly take part in NATO Tiger Meet – the annual multinational live-fly exercise of the Alliance and partner countries held for (and by) their air force units that share a tiger theme in their emblems.

It became a custom that every year units being affiliated to the NATO Tiger Association, paint some of their aircraft in ocassional, and usually eye-catching, ´tiger liveries´. One of such examples was the Eurofighter EF-2000 Typhoon S from Taktisches Luftwaffengeschwader 74 that in 2017 had received a special paint scheme called ‘Atlantic Tiger’.

And it became all the more special because, due to internal perturbations of political nature, the Luftwaffe had not acively participated in the NATO Tiger Meet exercise that very year. Nevertheless,  the ‘Atlantic Tiger’ had appeared in Landivisiau as the guest aircraft and then could be seen at several other aviation events in Europe. One of them was the air show held at the 31st Tactical Air Base in Krzesiny near Poznań, Poland, in September of 2017, on the occasion of the Polish Air Force Day.

New aviation museum to be created in Poland

Recently, we have learned about the new aviation museum that is going to be opened next year in central Poland. Its first exhibit has already arrived to the location, so we were just waiting for […]