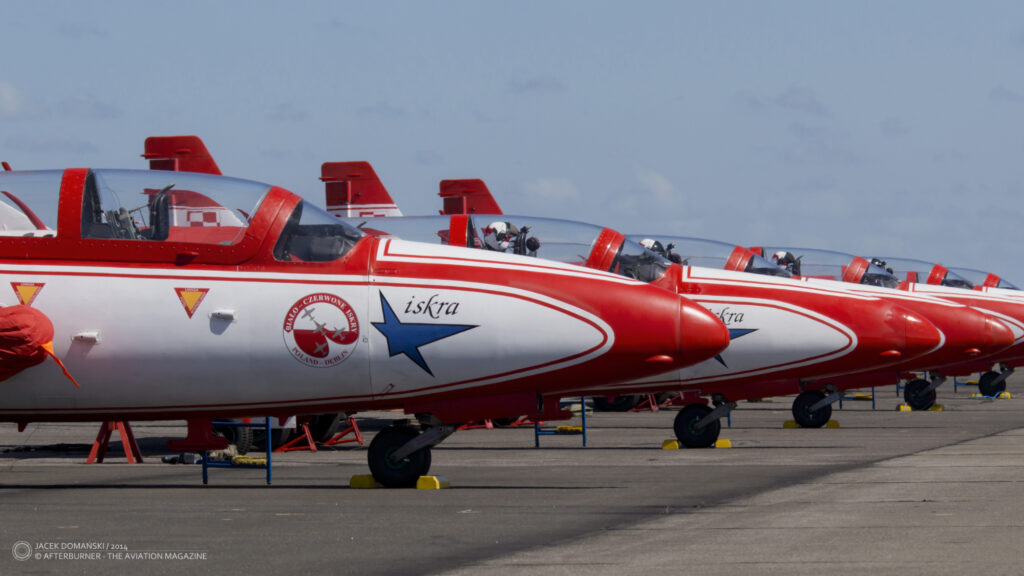 The team was formed in 1969 at the 60th Training Air Regiment in Radom. Initially, it was called ´Rombik´ (English: a little rhombus) and featured four PZL TS-11 ´Iskra´ (English: spark) aircraft. The aeroplane, that completed its maiden flight on 5th February 1960, was the first jet aircraft developed and produced in Poland.

The TS-11 entered service in 1963, becoming the basic military training jet in Poland. Although its production was ceased in 1987, the TS-11 remained in active service until December of 2020 when it was suceeded by Alenia Aermacchi M-346 Master.

The interesting history of development and service of the TS-11 was already introduced by us in 2021, within our Aviation History Friday series. We encourage you to take some time to read that article, if you would like to learn more about that aircraft itself and the reasons why it was used only with Polish and Indian air forces.

In 1991, the name of the Polish military aerobatic jet team was changed to ´Sparks Aerobatic Team´ (Zespół Akrobacyjny Iskry) and the aircraft received the well-known, white and red livery inspired by the colours of the Polish national flag. In 2000, the team moved to air training base in Dęblin and was re-named White-Red Sparks. At that time, the number of aircraft flying in the group was increased and the full formation display of the team included seven TS-11 jets.

Through many years, the White-Red Sparks team participated in many aviation events in Poland and throughout Europe, being an ambassador of the country and the Polish Air Force. In addition, flypasts made by the group were adding some splendour to various national celebrations and anniversaries. Without any doubt, the White-Red Sparks and their displays were the pride of Polish aviation enthusiasts, due to their amazing aerobatic skills and the fact the team was flying the domestically  developed and produced aircraft.

Nevertheless, introduction of the M-346 and following withdrawal of the TS-11 from operational service with the Polish Air Force at the end of 2020, meant the days of the team were already numbered. Initially, the last public presentation of White-Red Sparks was planned on 15th August 2022, during the Polish Army Day parade. However, due to situation in Ukraine, the celebrations were cancelled.

Finally, the last official flight of the White-Red Sparks aerobatic team was held yesterday, at the 41st Air Training Base. Regrettably, the celebration was closed to public and available only to invited military officials. It is such a shame the Polish armed forces have not decided to conclude the history of the sole Polish jet aerobatic team in a more spectacular way – if not by a display opened to public, then at least by a flypast over the country, or an event organized at the base but available to registered visitors and spotters.

Two further participants of the 2019 edition of the Aviation Fair in Pardubice were recently released. The first of these is, already present in Pardubice a few times, the Bo 105 helicopter from the Flying […]