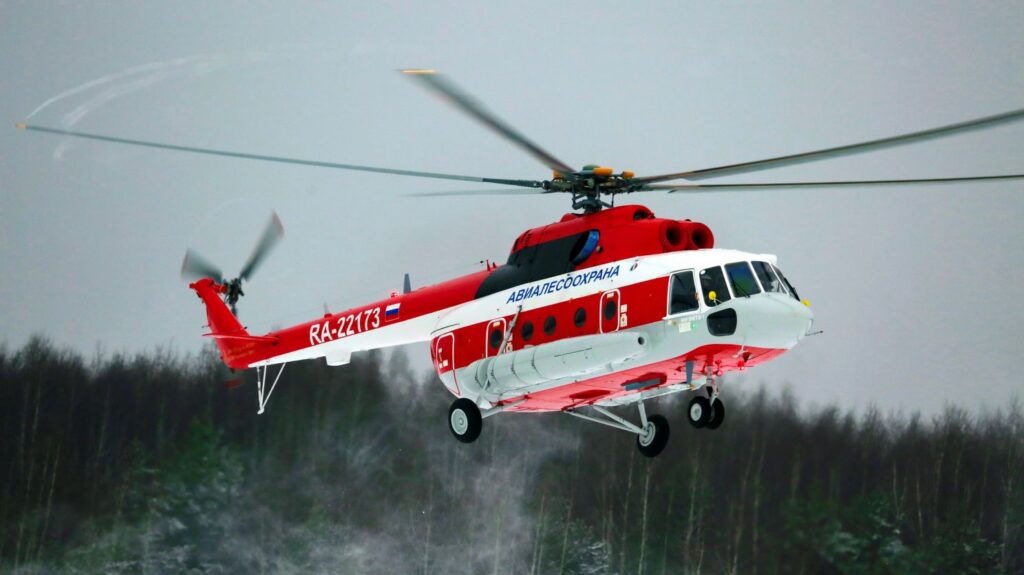 At the end of December 2021, the Russian Aerial Forest Protection Service (Авиалесоохрана / romanized: Avialesookhrana) has received its first two Mi-8MTV-1 rotorcraft. The aircraft were delivered within the framework of contract concluded between the Russian Helicopters holding and Avialesookhrana earlier that year and were made at the helicopter plant in Kazan.

The abovementioned contract was signed for delivery of six rotorcraft of that type, in order to equip newly created interregional forest fire centre ´North´ that was recently established in the Krasnoyarsk area. The Russian government had assigned an amount of five billion roubles to create the centre, recruit and employ the staff, as well as secure the necessary equipment and aircraft.

The first Mi-8MTV-1 helicopters for Avialesookhrana were handed over to their operator during a solemn ceremony, with attendance of Nikolai Krivosheev, head of the FBU Avialesookhrana; Vladislav Savelyev, deputy general director of the Russian Helicopters holding and Vladimir Ginsburg, managing director of the Kazan Helicopter Plant. In addition, remote participation of the Russian Minister of Natural Resources and Ecology, Alexander Kozlov, in that event was possible via online conference.

´For all of us, the creation of the ´North´ forest fire centre, where helicopters will be based, is an event of paramount importance. It is exactly the ´North´ from where our paratroopers will be sent to extinguish forest fires in hard-to-reach and remote areas. The helicopters from the ´North´ will fly in the sky above the Irkutsk region, Yakutia, Transbaikalia, Buryatia, Krasnoyarsk Territory and over the Baikal natural reserve. The first two helicopters are ready to be deployed, another four will be built and then handed over to us at the end of next year. I hope that all deadlines would be met, because for the fight with fire, every aircraft counts´, commented Alexander Kozlov.

Although the beginnings of Russian aviation forest protection service are dated back to the early years of the 20th century, the first official flight was performed on 7th July 1931. On that day, in the Gorky region, a U-2 aircraft took-off for the first flight with an objective of detecting the forest fire. Therefore, this date is widely considered as a birthday of the Russian aviation forest guards.

In the middle of the 20th century, the service achieved two significant milestones – introduction of helicopters as a new equipment to fight with the forest fires, as well as introduction of a new, related profession, a paratrooper firefighter.

In 1949, the Ministry of Forestry of the USSR created seven air bases focused on fire fighting and forest protection: Central, Northern, Ural, West Siberian, Irkutsk, Yakutsk and Primorsk. At the end of the 1990s, the Aerial Forest Protection Service operated 103 specialized aircraft, including An-2 and An-3 biplanes, An-24 and An-26 transport aeroplanes, Mi-8 and Mi-2 helicopters, as well as one Il-103 training aeroplane.

Nevertheless, as a result of reform from 2006, the air bases were closed and the fire-fighting responsibility was assigned to the regional authorities. They had to secure the service by employing both state-owned and independent agencies, however the change concluded in significant reduction of flying crews, decrease in number of flying hours and, primarily, with low effectiveness of the fire-fighting system.

As a consequence, in the late 2010s the Aerial Forest Protection Service began to slowly regain its former authorities. Nowadays, the system of aviation protection of Russian forests is represented by Avialesookhrana and regional specialized institutions being under jurisdiction of regional forest departments. However, in a number of regions, there are no dedicated operational units focused on that task.

Establishing a new air base in the Krasnoyarsk area is a significant step to re-establish a central coordinated and state-organized, effective fire-fighting duty.

During the currently ongoing Dubai Airshow 2019, the Russian Helicopters company made the first foreign presentation of its newest Mi-38 civilian helicopter. The rotorcraft featuring a luxury-cabin variant, is not only a part of the […]

As we already announced, another military holiday – the Day of the Russian Navy (День Военно-Морского Флота) was observed today in Russia. And as usual, the Navy Day was highlighted by the main Naval Parade […]

Last week, combat helicopters of the mixed helicopter regiment – being a part of the Baltic Fleet naval aviation – performed a live-fly tactical exercise (летно-тактические учение, ЛТУ) that included a missile attack on the […]