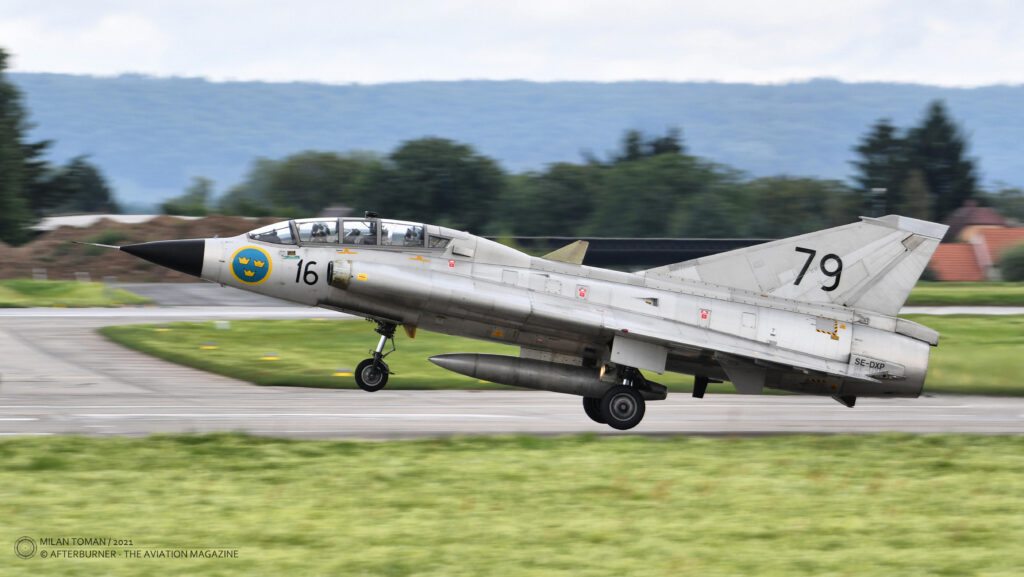 The Saab Draken (English: dragon) is another example of a supersonic interceptor, designed in response to emergence of jet bombers, able to perform their missions at high altitudes and transonic speed.

The first requirements for a fighter that could fly at a speed of 1.5 Ma and therefore engage supersonic bombers, were defined by the Swedish Air Force as early as September 1949. Then, following the development of jet-powered bombers, such requirement was gradually increased – at first to 1.7 Ma in 1956 and finally 2.0 Ma in 1959.

It was obvious that, due to the Swedish neutrality and its specific situation, the new fighter would be domestically-designed and manufactured aircraft. Therefore, there was no surprise that Saab company was assigned the task to create that new jet interceptor.

Apart from a desired flight characteristic of the new aircraft, a set of additional requirements was defined, including – as used to be customary in Sweden – ability to operate from rough runways, public roads and temporary air bases; a short refuel and rearm time; as well as an easy maintenance and service.

Initial studies performed by Saab indicated that a delta-wing aircraft might be the one to fulfil all abovementioned conditions. Nevertheless, it was yet a rarely used wing configuration, at that time being only tested by several aviation manufacturers as a potential solution for jet-powered aeroplanes (Avro, Convair, Dassault or Gloster).

In order to test the delta-wing configuration and to confirm its expected advantages, a scaled aircraft, reduced by approximately 70% was made. It was officially designated as Saab 210, but commonly recognized as ´Lilldraken´ (English: little dragon). That experimental aircraft performed its maiden flight on 21st January 1952 and further evaluation continued until 25th October 1956. In total, 887 test flights were performed and the prototype clocked 286 hours of flight time.

It should be mentioned here that testing the delta-wing configuration by evaluating scaled version of the future aircraft was not uncommon at that time. The same way was applied by Avro, that made several aeroplanes designated as Avro 707 and used to find the final shape of Avro 689 ´Vulcan´ strategic bomber. And the Convair company had its XF-92, that later evolved into F-102 Delta Dagger and B-58 Hustler.

Eventually, an approach adopted by Saab and its construction team has proved to be successful. A double-delta wing configuration with two air intakes below the cockpit was finally chosen, thereby allowing a full-scale prototype to be created. On 25th October 1955, the full-scaled prototype of the Draken performed its maiden flight.

An order for first batch of Saab J 35A fighters, as the aeroplane was officially designated, was placed next year and in March of 1960 the new jet officially entered its service within the Swedish Air Force. At the same time, another prototype of the Draken, powered by modified Rolls-Royce Avon Mk.48A jet engine, for the first time reached the speed of Mach 2.

The Saab 35 Draken, despite some initial issues with flight stability, proved to be a successful and well-designed aircraft. There were eight consecutive variants of Draken operated by the Swedish Air Force and four further export versions for Sweden, Denmark, Finland and Austria. The Danish Drakens were particularly interesting, being the only ones adopted for close air support role and equipped with air-to-ground missiles.

The Swedish Air Force has withdrawn the Draken fighter from operational service in 1999, nevertheless a few fighters of other operators made it until the 2000s – Austria retired its last Saab 35 in 2005, but a few other, operated by the National Test Pilot School in the United States (and acquired from Denmark) were flying until 2009.

Currently, there are still two airworthy Draken fighters in Europe. Both of them are operated by the Swedish Air Force Historic Flight. The first of them, SE-DXR, represents the J 35J version – the final upgrade of fighter variant, introduced in 1987. The other one is SE-DXP, a two-seat variant designated SK 35C and made by conversion of the J 35A fighter.

And exactly the latter, on its way to Kecskemét air show last week, made a refuelling stop at Čáslav air base, where this photo was taken.

A quarter century ago the United States Air National Guard (ANG) began the cooperation and joint trainings with the Czech Air Force. The initial goal of this partnership was to train the Czech military personnel […]