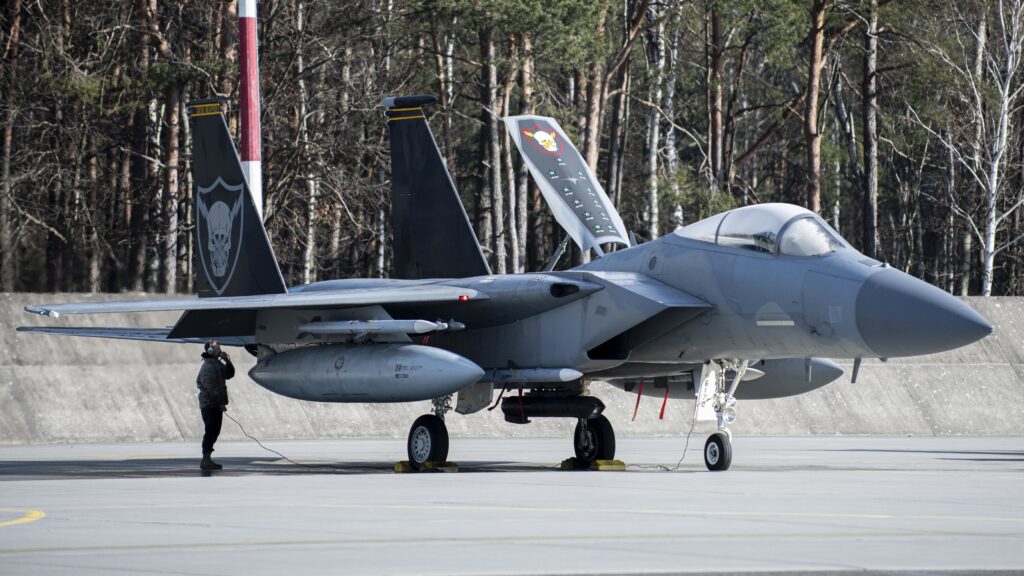 During that mission, the 493rd FS, nicknamed ´Grim Reapers´ was based at the 32nd Tactical Air Base in Łask, central Poland, a home of one of the Polish units equipped with F-16 Fighting Falcon jets. Eight F-15C Eagle aircraft were forward deployed to eastern flank of the NATO in response to evolving security situation in the Central and Eastern Europe.

The EAP mission in Poland is complementing the usual air policing activities performed by the Alliance, in particular the Baltic Air Policing (BAP) and the Romanian Enhanced Air Policing. The BAP is currently performed by Danish F-16AM Fighting Falcon jets, stationing at Šiauliai air base in Lithuania, while the Romanian EAP is now executed by a joint force of German and Italian Eurofighter 2000 Typhoon fighters.

It is important to add here, that Polish EAP was not the only one to be executed recently by the USAF, in relation with developments in Ukraine. On 24th February, two F-35 Lightning II aircraft, assigned to the 34th Fighter Squadron from Hill AFB in Utah, landed at the 86th air base ´Lieutenant Aviator Gheorghe Mociorniță´ in Borcea, Romania. They are aimed to enhance the NATO capabilities in the Black Sea area and to cooperate closely with the Romanian Air Force. Among other USAF units deployed to the region there is the 480th Fighter Squadron from Spangdahlem AFB, Germany, that  was also deployed to Romania in February.

In addition, another detachment of the F-35 Lightning II fighters from the 34th Fighter Squadron is currently being based at Ämari, Estonia.

The USAF forward deployment in Poland has started with a series of local area familiarization flights, performed on the first day after the arrival, on 11th February. Then, the ´Grim Reapers´ were assigned the task to provide a combined readiness and consistent capability for the Allied maritime and air assets in the area of deployment. The 493rd Squadron was also executing training missions flown together with the Vipers of the Polish Air Force.

Technical and maintenance assistance for the ´Grim Reapers´ deployed to Poland was provided by the 748th Aircraft Maintenance Squadron and local Polish personnel.

The NATO Air Policing missions are being executed on regular basis since 1961. After completing its last EAP mission, the 493rd FS was relieved by the 336th Fighter Squadron from Seymour Johnson air base in North Carolina.

The 493rd Fighter Squadron ´Grim Reapers´ is one of the most-known USAF units. It had earned several awards and trophies, being recognized the top fighter squadron within the USAF in 2007, 2014, 2016 and 2019. The unit received their first two F-15C jets on 15th November 1993 and successfully operates this type of aircraft until today.

After concluding the EAP mission in Poland, the ´Grim Reapers´ returned to the UK. In the nearest future the 493rd FS is going to retire all its F-15C/D Eagles and go back to the United States. There, the squadron will start the re-equipment process to receive the new, 5th generation aircraft – Lockheed Martin F-35 Lightning II.

All photos and quotations © U.S. Department of Defence (DoD), cover photo: F-15C during the pre-flight test at Łask (USAF photo by Tech. Sgt. Jacob Albers). DoD information materials were used, in compliance with Public Domain licence. The appearance of U.S. Department of Defense (DoD) visual information does not imply or constitute DoD endorsement.

Jumping into the night

On 7th June, the members of the 63rd Parachute Brigade of the Serbian armed forces performed a night-time parachute training in the Niš area. The main goal of the exercise was to maintain high level […]

Maiden flight of PZL.44 Wicher (English: Gale), a prototype of Polish two-engine airliner. The inter-war years were a period when aviation truly boomed all over the world. Especially in the 1930s, the popularity of air […]