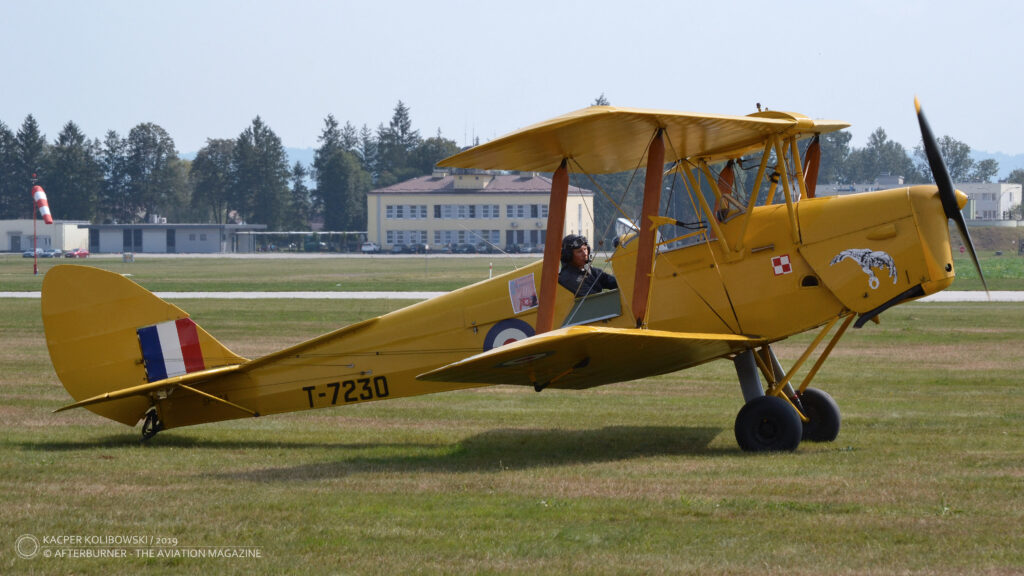 A Tiger Moth… Today, most of us will immediately associate the name with that particular little British biplane, although the Tiger Moth was initially a monoplane. Indeed, history of the DH.82 development is directly related to one of the previous designs of the de Havilland company, an aircraft designated as DH.71. It was a low-winged monoplane created in the late 1920s, in order to test a then newly developed de Havilland Gipsy engines. And it was just this aeroplane that was the first to be named Tiger Moth.

Later on, the design improvements from the DH.71 were applied to a DH.60T aircraft, being a military training variant of DH.60 Gipsy Moth biplane. And in this case, the letter T in the designation stood not only for Training, but also for Tiger.

The DH.60Ts were subsequently handed over to the Royal Air Force for testing purposes. However, the tests had revealed imperfections. In order to compensate for the design shortcomings and meet the military expectations, the DH.60T underwent several further improvements within the trial process. Eventually,  as a result of the testing and necessary refinement, the aeroplane received a positive opinion. Shortly thereafter, the British Air Ministry – in accordance with its Specification 15/31 – has placed an order for one example of the improved aircraft, that soon received an official designation of DH.82 Tiger Moth and finally became the primary training aircraft of the RAF.

Among the changes made to the aircraft in comparison to its predecessor, the DH.82 had shortened interplane struts to raise the wingtips and thus the visibility of the ground from the cabin was increased. Access to the forward cabin was also improved by moving the upper wing forward, while sweeping the wings backwards to maintain the same centre of lift. In addition, the exhaust system was changed, fold-down cabin doors were added on both sides of the fuselage, and the airframe structure was strengthened.

The prototype of the DH.82 aeroplane, designated E6, made its first flight on 26th October 1931 at Stag Lane Aerodrome, Edgware, London. It was flown by Hubert Broad – the de Havilland Chief Test Pilot. In the same year, serial production of the aircraft began and the Tiger Moths were officially assigned to the RAF Central Flying School in February 1932. Additionally, in accordance with Specification T.6/33, the RAF also ordered two examples of seaplane variant, fitted with floats.

At the end of 1934, an improved version, named Tiger Moth II and equipped with a more powerful de Havilland Gipsy Major engine, was introduced. Shortly thereafter, as a result of the British Commonwealth Air Training Plan, the de Havilland DH.82 Tiger Moth became, for many years,  the primary training aircraft throughout the Commonwealth.

Until the outbreak of the Second World War, a total of 1,424 aircraft of this type had been built and the RAF had about 500 of them in service. By 1939, nearly forty flight schools (including nine that used civil registered aeroplanes) operated the Tiger Moths for training purposes.

Despite being a main workhorse for the RAF training units, the Tiger Moth also performed a number of other roles in military aviation.

Yet before the war, in 1935, the DH.82 Queen Bee was created – an unmanned, remote-controlled variant of the Tiger Moth for training anti-aircraft gunners. A total of 470 Queen Bees were produced and three hundred of them were still in the RAF service at the beginning of the Second World War.

At this point it is worth to note that it is to the Queen Bee that we owe the name ‘drone’, so popular today among unmanned aerial vehicles. In general, the word refers to a kind of male bee that makes one flight in search of a female and then dies.

The Royal Navy used the DH.82 as target tugs and the Tiger Moth saw also a service in coastal aviation. Already at the beginning of the World War II, in September of 1939, the RAF Coastal Command – due to a temporary shortage of suitable aircraft – had six flights equipped with the DH.82 aircraft, used for patrol duties over coastal waters.

In August of 1940, three proposals for combat use of the Tiger Moth aircraft emerged. All of them were related to beach defence systems and included a light bomber, a rat-poison dispenser and, the most curious one – a ´paraslasher´ version intended to cut canopies of enemy parachutist. None of those ideas were accepted, eventually.

The de Havilland DH.82 Tiger Moth was in active service of the Royal Air Force through the whole World War II and yet until the early 1950’s when it was succeeded by de Havilland DHC-1 Chipmunk. Apart from the RAF, that aircraft was used by forty other air forces around the world.

Moreover, the Tiger Moth also achieved a great success in civil aviation. It was introduced in that market yet in 1937, as the level of serial production already exceeded the military needs. And the number of non-military DH.82s grew rapidly after the war, due to availability of surplus aircraft. The Tiger Moth biplanes were used for training, crop dusting, joy flights, airshows and many other purposes, including starring in films, such as ‘Lawrence of Arabia’ (1962) or ‘The Great Waldo Pepper’ (1975).

In 1975, the de Havilland Moth Club was formed in the UK, being an association of DH.82 owners, offering mutual club and technical support.

Currently, apart from many examples that are in collections of aviation museums around the world, there are probably some 250 examples of the de Havilland DH.82 Tiger Moth in flying condition.

One of them is the de Havilland DH.82 T-7230 featured in the photo above. This example, that today bears a characteristic, late-war yellow colour scheme, was produced in 1939. It was brought to Poland in 2007 and since then has become part of a flying collection of Flying Museum of the Polish Air Force 1940 – 47 founded by Jacek Mainka. On a daily basis the aeroplane is being stationed at Konstancin-Jeziorna airfield near Warsaw.

11th May 2021 Kacper Kolibowski PHOTO OF THE WEEK