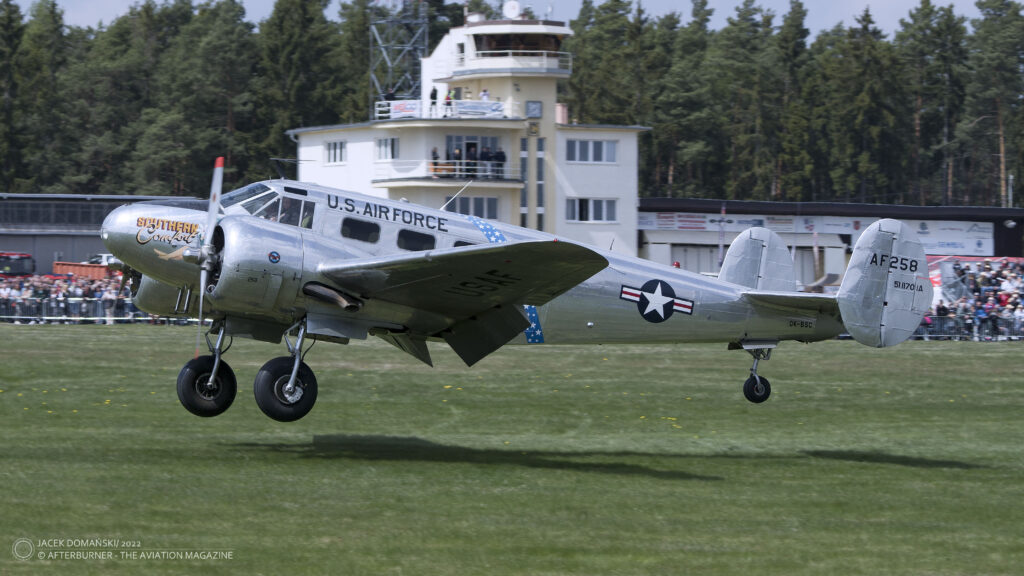 Aviation event held annually at Aeroklub Plasy airfield is the traditional opener of the Czech air show season. This year, the show returned after a two-year gap caused by coronavirus outbreak – and it was a great comeback!

Den ve vzduchu s Plzeňským krajem (Day in the air with Plzeň Region), as the full name of the show is, advertises itself as the biggest aviation event within the West Bohemia region. And there is no exaggeration in that statement, because the event in Plasy offers a full-day programme of static and dynamic aviation displays, demonstration of rescue actions performed by the regional fire department, as well as a variety of side events.

As already mentioned above, the last edition of Den ve vzduchu was held back in spring of 2019 and among highlights of the show there were de Havilland Tiger Moth, SM-92TE Praga Alfa, Caudron G.III and Polikarpov Po-2. Two next editions, although already being planned, were regrettably cancelled due to coronavirus-related restrictions that significantly reduced the possibility of such mass events.

Therefore the annoucements spreading the news that show is coming back this year were more than welcomed by many aviation enthusiasts. Mostly because Den ve vzduchu usually stood out of the aeroclub-organized events, offering an interesting aviation programme, professional organization of the event itself and, last but not least, the great location of Plasy airfield – on a top of a hill and surrounded by forest.

This year´s show was held on Saturday 30th April and Sunday 1st May, with similar aviation programme and side acts for both days of the event.

Den ve vzduchu 2022 was opened by displays of various rescue techniques and procedures, presented by the Fire Department of the Plzeň Region. They included car accident operations, as well as using professional climbing equipment and ladders. The firefighting display lasted approximately one hour and was divided into two separate blocks.

Those who were not interested in seeing the fire brigade in action and preferred to focus on aviation instead, could spent the morning hours on watching arrivals of the air show participants. The majority of aircraft came on the opening day, thus creating a good possibility to follow them during landing and taxiing procedures. All the aircraft were then parked close to the spectators´ area, thus allowing to see them up close and, additionally, to speak with their pilots.

Flying display programme began at 13:30 with – similarly as in previous years – a flypast of two JAS 39 Gripen fighters of the Czech Air Force. Although the Gripens were the only jet aircraft participating in the show, it cannot be said that Den ve vzduchu 2022 was lacking any other adrenaline-filled demonstrations.

There was much to pleasure fans of the historical aircraft as among the aeroplanes that participated in the flying displays in Plasy there were Beechcraft C-45H Expeditor, two derivates of Bücker Bü 131 Jungmann (Spanish-made CASA 1-131E and Tatra T-131PA), as well as three interesting replicas – Avia BH-1, Klemm L25 H and Zlín-XII.

Another historical aircraft that had its Czech air show premiere during Den ve vzduchu 2022 was Max Holste MH.1521 Broussard. The aeroplane entered its operational service in the mid-1950s and was operated by the French Army until the 1990s. It was widely used during the Algerian War as an army cooperation aircraft. Built in a rather small series of less than 400 examples, MH.1521 Broussard is really a rare warbird now, not so often seen at air show events.

Flying display and search and rescue demonstration flown by PZL W-3 Sokół of the Czech Air Force was among the highlights of the Plasy air show. An amazingly dynamic programme connected with rescue procedures has not only attracted the attention of spectators but also was considered by many of them as the best performance at the event. Indeed, the capabilities of Polish-made W-3 helicopter are just awesome and if flown by an experienced pilot – as the crews of the SAR service are – it can perform an incredible flying display.

Among other participants of the show there were Antonov An-2, performing a solo display with attractive water drop in front of the spectators, and another aerobatic group, Follow Me, flying four Zlín Trener aircraft (Z-226MS and Z-326MF). Another An-2 was used to carry parachutists that presented another eye-catching aerobatics programme. In the middle of flying displays there was also an introduction of commercial UAVs, that completed the offer of Den ve vzduchu 2022 flying displays.

After conclusion of dynamic programme many of the spectators still stayed at the airfield and used another opportunity to meet with the pilots. There was also a good time for taking some photos with them – and we need to point that Petr Kopfstein was among the most popular ones. In addition, there was also an opportunity to fly a sightseeing flights with aeroclub aircraft. It attracted a lot of people as the weather was just perfect for such activity and the surrounding countryside was really worth to be seen from a bird´s eye perspective.

It must be mentioned here that the Plasy air show is traditionally focused on Czech-based aircraft and well-known Czech pilots, especially those related to the Plzeň region. Foreign participants are not so often seen there and usually include just a few displays. Nevertheless, despite that the 2022 edition of the show was only about the domestic displays, it was no less interesting as the previous events we have visited back in the middle of 2010s.

Although being an air show of just a local range, Den ve vzduchu 2022 offered approximately three hours of flying displays, together with a variety of side events. It also attracted many visitors out of the region, as well as from abroad (mostly from Germany).

Taking under consideration the long gap caused by the pandemic and related restrictions, we dare to say that Den ve vzduchu returned to the Czech air show calendar with style. Its flying displays were enough interesting and eye-catching for any aviation fan, as well as for general public. It was a great time spent there and we are already looking forward for the 2023 edition of the show.

Nevertheless, those who live near the West Bohemia region will still have possibility to attend another aviation event organized there this year – Letecký den Cheb that is going to be held on 13th and 14th August 2022.