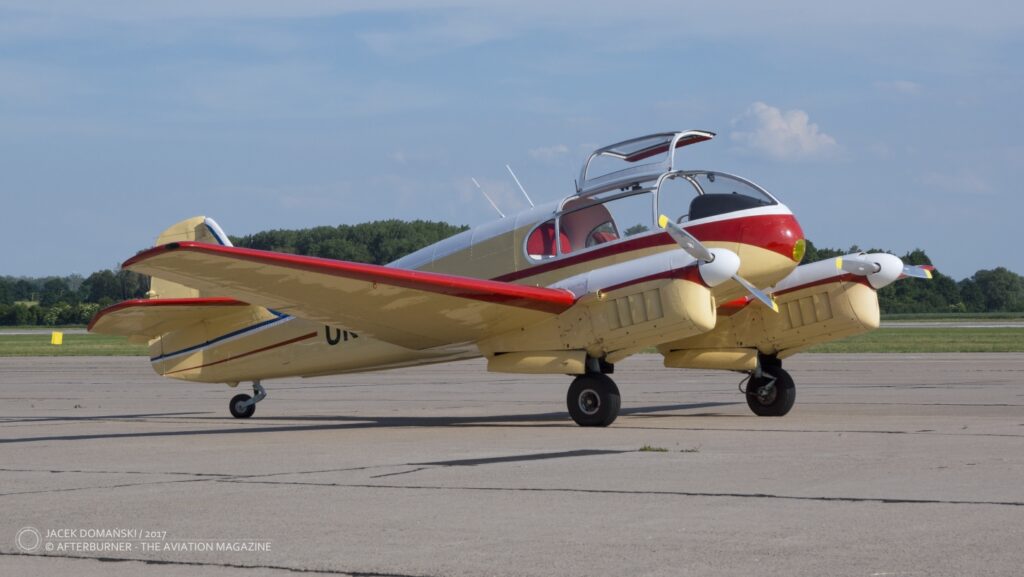 Aero – továrna létadel (Aero – the aircraft manufacturer) company was founded in 1919 and today is usually considered to be part of the mid-war Czechoslovak industrial legacy – sometimes even with almost a legendary status.

During more than one hundred years of its history, the Aero manufactured several well-known and successful aircraft, including A-11, A-32, L-60 Brigadýr, L-29 Delfín or L-39 Albatros. The company was also manufacturing small cars, trucks and – during the years of the World War II – Bü 131, Fw 189 and Si 204 German-designed aircraft.

After the war, the Aero continued with assembling the aircraft of post-German origin, using the existing production facilities and already manufactured parts. Nevertheless, a group of constructors – Miroslav Baitler, Pavel Rosendorf, Jiří Bouzek, Ondřej Němec and František Vlk – intended to go way beyond and create a completely new aircraft.

Works on a two-engine, four-seat light utility aircraft were launched during the summer of 1945 and in the beginning it was just an unofficial project of the abovementioned engineers. As the development progressed, the idea of building a new Czechoslovak aircraft was recognized officially and the aeroplane was designated Ae-45.

The first prototype was ready in 1947 and performed a successful maiden flight on 21st June. In September of the same year, the Ae-45 was for the first time presented to general public, during an air show at Prague-Ruzyně airfield. The second, upgraded prototype, took-off for the first time on 12th March 1948 and after a year of extensive testing and adjusting the construction of the new aircraft, the serial production of the Aero Ae-45 was launched in April 1949.

Eventually, the first Czechoslovak aircraft designed after the World War II has proved to be a great success. Its production was continued until 1961 and almost 600 aeroplanes of all variants were made. The Aero Ae-45 was used by both civil and military operators in many countries, including China, Vietnam, Australia, USSR, Switzerland, India, Hungary, Poland and Italy.

In 1949, the Aero Ae-45 won the Norton Griffiths Race and shortly after was also the winner of ´Championship of Italy´ contest. Several long-range trips were completed with this successful Czechoslovak design – non-stop flight over the Sahara desert, a journey from Prague to Ceylon, another one from Prague to Hongkong and in 1958, the Ae-45 became the first Czechoslovak-made aircraft to cross the Atlantic Ocean (this achievement was then repeated in 1981).

The Aero Ae-145 variant was being manufactured since 1958 by LET Kunovice aviation factory, then known as Strojírny první pětiletky (Machine Works of the First Five-year-plan). It was a slightly upgraded variant with more powerful M-332 engines (with 103 kW each, instead of 77 kW in Ae-45 and Ae-45S).

The aircraft pictured above was manufactured in Kunovice and exported to Yugoslavia, where it was operated by the air force until 1991. After the collapse of Yugoslavia, this Ae-145 was acquired by an aeroclub in Slovenia. In 2006, the aeroplane was bought by NXX Ltd. from the Czech Republic, then transferred to Brno and completely renovated.

After the reconstruction, this Ae-145 was registered as OK-DAJ and became a frequent participant of aviation events in the Czech Republic and neighbouring countries. Currently the aircraft is being owned by Air Smolik company and based at Podhořany airfield.

A rare view at the European airshows – the Bulgarian Su-25 UBK – has just arrived at Pardubice, for the static display during the 2012 edition of the Aviation Fair air show The visit of […]