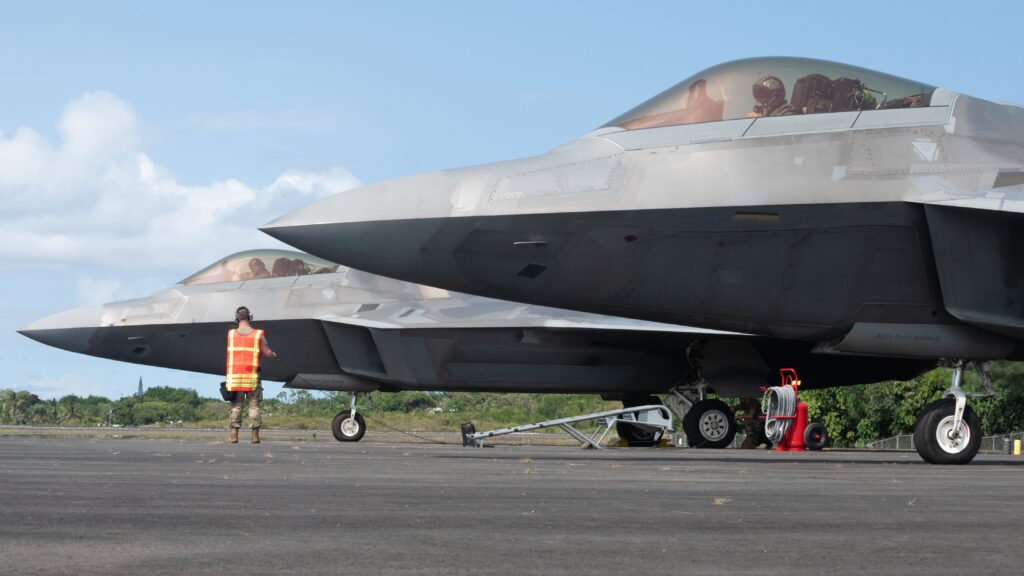 A first-of-its-kind joint exercise was hosted between 3rd and 6th March 2022 by the Hawaii Air National Guard. The training, codenamed ´Ho’oikaika´, was focused on creating a stealth airpower while operating from three separate locations throughout the Hawaiian archipelago.

The term Ho’oikaika orignates from the Hawaiian language and means – to strengthen / to encourage. It exactly suits with the scope of the exercise that involved the 154th Wing of the Hawaii ANG, the 15th Wing of the Nevada ANG and the 354th Fighter Wing Airmen, as well as the 18th Aggressor Squadron from Alaska.

´Ho’oikaika, is a new way of conducting exercises´, said the 154th Wing Inspector General and emphasized that the training is ´gently getting rid of as many simulations as we can by uniquely challenging the skillsets of our Airmen. We’ve never seen an exercise that is being challenged in multiple locations for a single organization´.

Within the exercise scenario, F-22 Raptor fighters of the Hawaiian ANG were rapidly deployed to forward-operating locations at Marine Corps Base Kaneohe and Hilo International Airport. A high-effective airlift was a key to successful execution of the deployment task, requiring a capable fleet of transport aircraft. Therefore, not only Hawaiian-based C-17 Globemaster IIIs took part in that training activity, but also C-130s from the Nevada ANG were involved as an additional support force.

The airlifters successfully secured the logistics part of the main operation, delivering locations a mobile infrastructure for aircraft maintenance, weapon systems, navigation equipment and communication stations, security equipment, expeditionary kitchen and many others to abovementioned deployment.

That airlift operation was a foundation to get the F-22 Raptors airborne from the forward-operating locations and to keep them capable of flying combat training missions during the entire period of their deployment.

The US DoD emphasized that, unlike previously held exercises, during the Ho’oikaika exercise the participants were challenged to act beyond their usual, specialized scope of duty while being exposed to mock scenarios, such as broken equipment, security breaches, and depletion of resources. Following the multi-capable airman initiative implemented by the USAF, the ground personnel was acting as an anonymous force, granting a new level of authority for them.

Ho’oikaika was also called ´an exercise built within an exercise´ as it was organized in between the regularly-held aviation training in the area, named Pacific Raptor. However, and unlike the previous exercises, this time a vast majority of the 154th Wing was involved to secure the same level of airpower from all alternate deployment locations.

As explained by the Inspector General, the new attitude to training activities was ´just a steppingstone into the things we want to get better at and a place where we want to grow from´. Ho’oikaika had brought an invaluable set of notes and experiences, provided an operational complexity and high stress level, as are usually present in agile-combat environment.

For the Hawaii and Nevada ANG, as well as their active-duty counterparts from the 15th Wing and the 18th Aggressor Squadron, the exercise was a perfect opportunity to train and improve an ability to rapidly deploy to and operate from remote locations.

All photos and quotations © U.S. Department of Defence (DoD), cover photo: F-22 Raptors, operated by members of the 199th and 19th Fighter Squadrons, prepare for a training sortie on 4th March 2022, at Hilo International Airport, Hawaii (US ANG photo by Staff Sgt. John Linzmeier). DoD information materials were used, in compliance with Public Domain licence. The appearance of U.S. Department of Defense (DoD) visual information does not imply or constitute DoD endorsement.