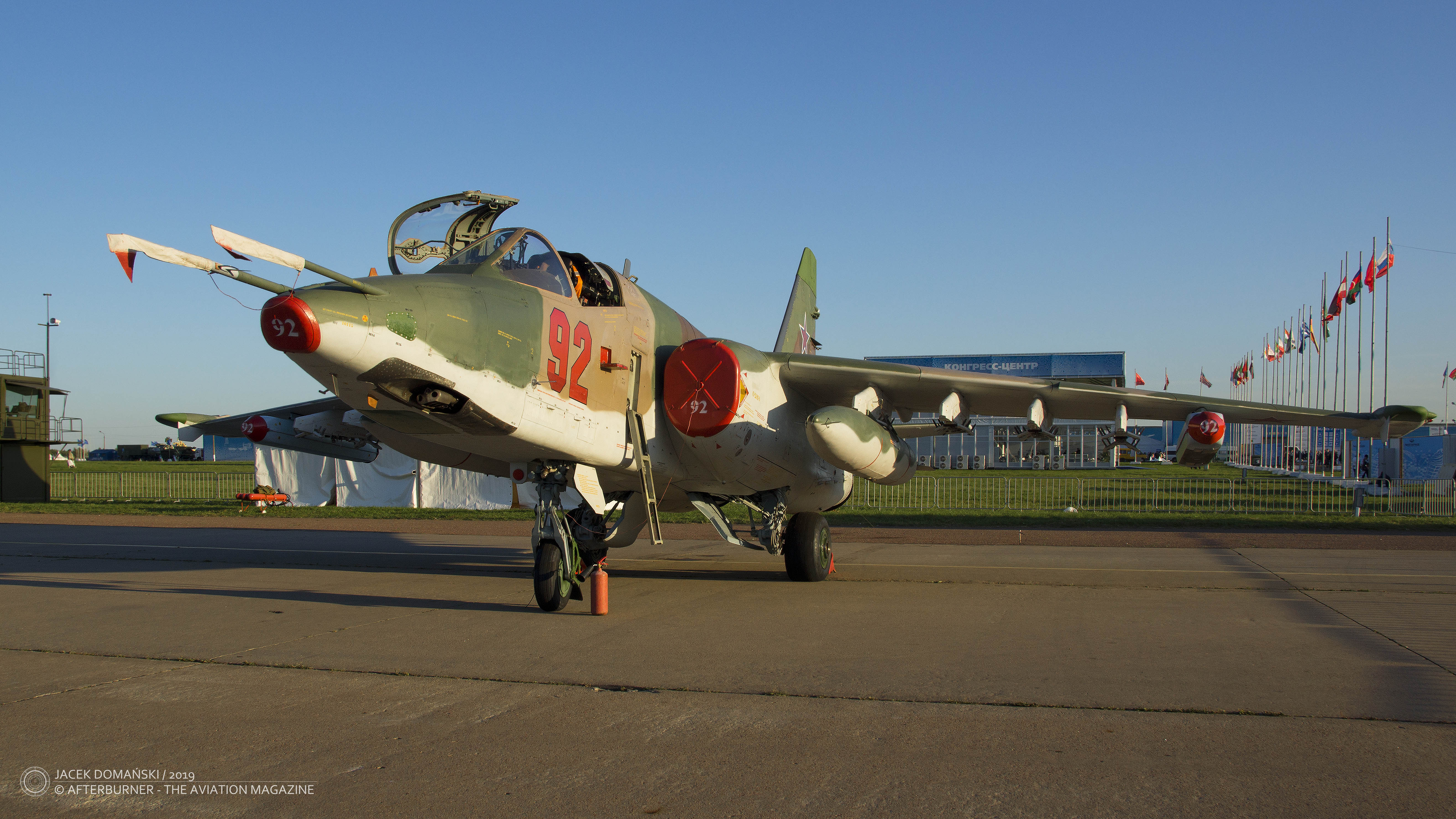 The Su-25SM is an upgraded variant of the basic aeroplane, developed in a modernization programme launched in the late 1990s. Initially, the Russian fleet of attack aircraft had to be replaced by a second-generation of ´Grach´ – an aeroplane designated as Su-25TM or Su-39 (Frogfoot C). Nevertheless, in the sad Russian reality of the 1990s such advanced modernization of the Su-25 had turned out to be simply too expensive. The Su-25TM programme suffered from slow development and finally was abandoned in 2008, after delivering only eight aircraft for the Russian Air Force.

In the meantime, being fully aware of the issues with development of the TM variant, the Sukhoi company launched works on another, less ambitious, modernization programme called SM (Строевой-Модернизированный, English: line upgrade). It was focused on enhancing both lifespan and operational capability of already manufactured aeroplanes.

The prototype of Su-25SM (factory designation T-8SM-1) was for the first time exhibited on static display at the 5th International Aviation and Space Salon MAKS-2001. A few months later, on 5th March 2002, the aircraft successfully performed its maiden flight. Finally, four prototypes of the SM variant were built, and only one of them was financed by the state – the remaining three were made from Sukhoi own resources.

The airframe of the Su-25SM was modernized to extend its service life by up to 500 flight hours (or 5 years). In addition, the weapon suite of the aircraft was expanded, to include all modernized or newly developed Russian air-to-ground missiles and bombs.

The modernization programme was officially approved in 2006, after a series of state certifications. In the following years, the first modernized Su-25SM were delivered to the 4th Centre for Combat Employment and Retraining of Personnel at Lipetsk air base.

Although the SM modernization programme is continued until today, it was a subject of several additional upgrades. The current variant, designated as Su-25SM3, was introduced in 2018 and includes the latest developments in electronics and optical warfare – laser range finder and target designator, thermal imager, enhanced television transmission, missile warning suite, radar homing and warning system, as well as radar jamming pods.

Nevertheless, introduction of Sukhoi Su-34 fighter-bomber caused another slowdown in the Su-25 modernization programme. The new generation of attack aircraft, represented by the Su-34, has as much greater combat capabilities that is gradually becoming a new standard within the Russian Aerospace Forces. Therefore, the SM programme will be continued only to secure operational needs of the armed forces until the delivery of sufficient number of the Su-34 attack jets.

Last week, combat helicopters of the mixed helicopter regiment – being a part of the Baltic Fleet naval aviation – performed a live-fly tactical exercise (летно-тактические учение, ЛТУ) that included a missile attack on the […]

Strategic joint exercise ´Zapad-2021´, that was held between 10th and 16th September at nine training areas in Russia and Belarus, included several airborne operations carried out by both the Russian Airborne Forces (Воздушно-десантные войска России) […]

The Russian MoD has revealed some information on the aviation part of the Victory Day Parade that will traditionally be held on May 9 over the Red Square in Moscow. We may expect some interesting […]