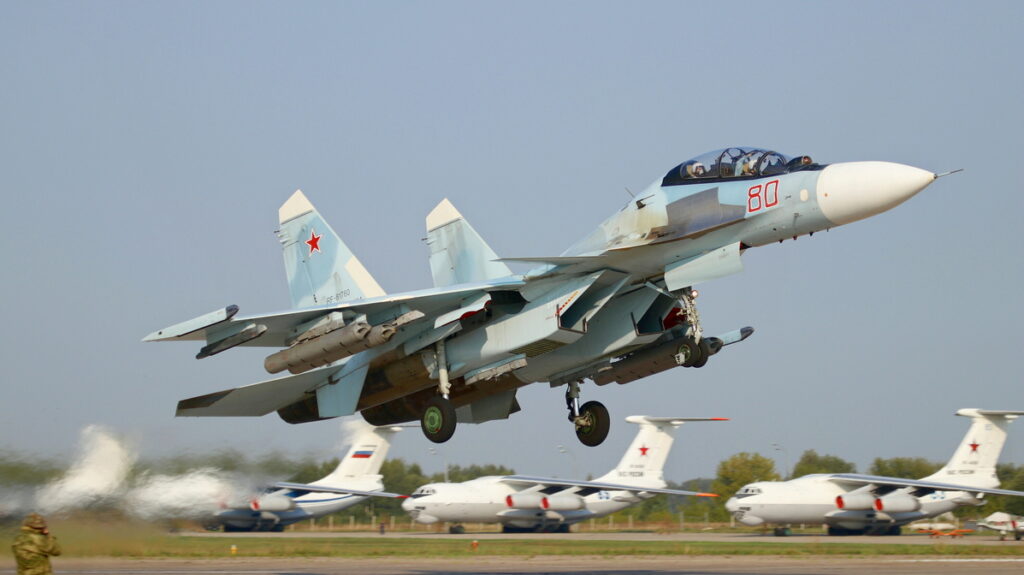 On 4th September 2021, this year´s edition of International Air Crew Training Competition ´Aviadarts-2021´ was officially concluded. For two weeks, aviation crews from the Russian Federation, Belarus and China were completing assignments of the contest, by performing live-fly missions over Diaghilevo airfield and Dubrovichi training ground in Ryazan area.

The first day of live-fly part of the contest was marked by competitions held in categories of aerial navigation and piloting techniques. Russian pilots won the first and the second places in both of them and therefore from the very beginning became leaders of the team classification. Belarusian and Chinese pilots took the second and third place, respectively.

On the next day, the participating crews have competed in an aerial reconnaissance category. They were assigned a task of detecting and recognizing five targets on the ground – of different shapes, sizes and colours – located in an area of 50 square kilometres. This mission had to be accomplished within just twelve minutes. And also in this competition, the Russian pilots scored the best results by finding the largest number of targets in the shortest time.

Two new records were set during the final stage of the contest, when the aviation crews were assigned a task of destroying some ground targets. The first one was established in the category of army aviation multipurpose helicopters – a pair of Belarusian Mi-8 rotorcraft has reached an impressive score of 314 points. The second record belongs to the People´s Liberation Army Air Force and its pilot flying Shenyang J-16 multirole strike fighter, who achieved 323.5 points in the bomber aircraft category.

In the last phase of the contest, its participants have fired 460 shells from onboard cannons and launched 180 unguided missiles. There were twenty four of 250kg aviation bombs dropped, as well as eight airdrop platforms used by the transport aviation.

As stated by the deputy chief judge of the competition, Lt. Col. Eduard Altukhov, in the fighter and bomber categories almost all targets were destroyed at the first approach – a result that was very rare in the previous editions. It should be also mentioned here that during the final competition, not only the bombing accuracy was measured, but also observing flight procedures and patterns.

Although, before the closing stage, the Russian crews were leading in most categories, the level of competition was rather balanced and the final results could not be predicted until the very end of the contest.

A pair of Mi-8AMTSh rotorcraft from the Rostov region has scored together 641 points, therefore setting another record of the ´Aviadarts´ competition. The fourth, and the last, record-breaking score was achieved by another helicopter crew, also flying a Mi-8. Aviators from the Stavropol region received an incredible 184 points for their piloting techniques – the best result in the history of the contest.

Chinese pilots flying Chengdu J-10 aeroplanes have won the category for fighter aircraft and crews of Shaanxi Y-9 were a winner in the transport aircraft category. The People´s Liberation Army Air Force was also awarded two other silver medals in long-range aviation and bomber categories and took the third place in transport aircraft – this time with Xian Y-20 aeroplanes.

Pilots from the Republic of Belarus have won a set of three silver medals, in categories of close support aircraft (Su-25), army aviation combat (Mi-24) and multipurpose (Mi-8) helicopters.

According to the chief of staff of the ´Aviadarts-2021´, Col. Alexei Dmitriev, all pilots participating in the competition proved their highest level of training and professionalism.

Official closing ceremony of the International Air Crew Training Competition ´Aviadarts-2021´ was held on 4th September, at Diaghilevo air base. The event was attended by the aviation crews and judging panel, high-ranked officers of the Russian Aerospace Forces, regional authorities, air force veterans and also official delegations from the participating countries.

In addition, the winning and record-breaking pilots from the 4th Air and Air Defence Forces Army of the Southern Military District were welcomed by another solemn ceremony, this time held at their home airfield in the Rostov area.

Russian Helicopters completed validation of the type certificate for Ansat light multipurpose helicopter in the People’s Republic of China. The certificate is now allowing the Russian manufacturer to commence the supplies of Ansat to China, […]

Forty-three crews from four countries participated in the 2019 edition of International Contest ´Aviadarts´ that was organized between 3rd and 17th August 2019 at Diaghilevo airfield, Ryazan region. An overall winner of the contest was […]

Ilyushin Il-2 at the static display during the International Aviation and Space Salon MAKS-2017, Zhukovsky airfield, Moscow area. Although there were more than 36,000 of Il-2 aircraft built during the World War II, there are […]